Medical examiner ruled his death a homicide by strangulation. 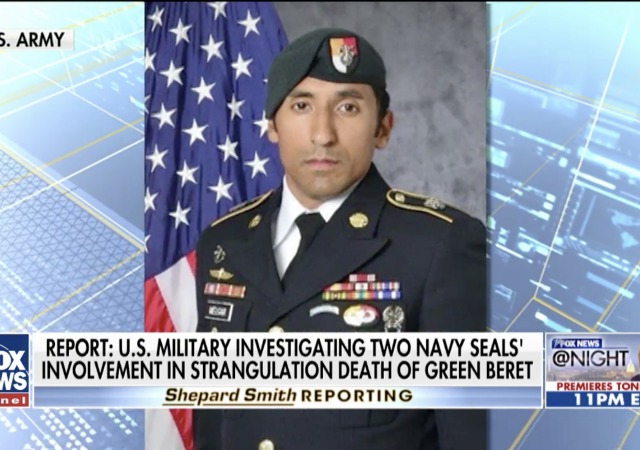 In October, I blogged that the Navy opened an investigation to determine if two members of Navy SEAL Team 6 strangled Staff Sgt. Logan J. Melgar, a 34-year-old Green Beret, in Mali last June.

The Daily Beast has now released a report the men killed Melgar after he uncovered their theft scheme to pocket money from an informant fund.

The Intercept identified one of the SEALs as Petty Officer Anthony E. DeDolph, a former professional MMA fighter. The other suspect has not yet been identified.

The Daily Beast reported that the U.S. presence in Mali is small, but the small amount of special forces “aid U.S. diplomats, Malian soldiers and their French partners in gathering intelligence on a confluence of capable local militants trending Islamist.”

This means their actions could include cutting corners since they have little oversight. The report continued:

For example, part of the intelligence gathering operation in Mali involved a fund used to pay informants.

Melgar, two special operations sources say, discovered the SEALs were pocketing some of the money from the informant fund. The SEALS offered to cut him in, but Melgar declined, these sources said.

Right before he died, he told his wife Michelle “that he had a bad feeling about two of his partners in that effort, both of whom were members of SEAL Team Six.” He didn’t offer more details, but promised to tell her more when he came home.

Melgar was found dead on June 4:

It is unknown what specifically started the June 4 altercation at 5 a.m. but it escalated. Melgar lost consciousness—and, worse, stopped breathing. The SEALs attempted to open an airway in Melgar’s throat, officials said. It is unknown whether Melgar died immediately. The SEALs and another Green Beret, according to former AFRICOM officials, drove to a nearby French clinic seeking help. Melgar was dead when he arrived at the clinic, the official said. Asphyxiation was the cause of death.

The SEALs said that Melgar was drunk when he took part in “hand-to-hand fighting exercises,” but Melgar didn’t drink on June 4. His autopsy showed no drugs or alcohol in his system. Another source said that Melgar never drank alcohol.

The medical examiner ruled Melgar’s death a homicide from strangulation. From The Intercept:

It was only after the autopsy that DeDolph and his teammate claimed the three roommates had been “grappling” at roughly 5 a.m. in their apartment, when Melgar was put in a “chokehold.” Grappling and chokeholds are techniques often used in MMA. DeDolph and his teammate eventually told investigators that Melgar passed out while they were grappling, and they tried to resuscitate him before taking him to the medical facility, according to the military officials.

“NCIS can confirm we are investigating the death of SSGT Melgar on June 4 and that the case was transferred to NCIS from Army CID on September 25,” said Ed Buice, a spokesperson for Navy Criminal Investigative Service. “Beyond that, NCIS does not discuss details of ongoing investigations.”

A second former Africa Command official said Brig. Gen. Donald Bolduc, then commander of Special Operations Command-Africa, was skeptical of the initial reports from the outset. He alerted Army Criminal Investigation Command and told commanders in Mali to preserve evidence.

Melgar’s wife, Michelle, was also suspicious, three sources tell The Daily Beast. She raised concerns about the cause of death and allegations of drinking, according to three people familiar with the investigation, including providing investigators emails sent by her husband about problems he was having with the SEALs.

The military flew out the two Navy SEALs back to headquarters in Germany and placed them on administrative leave.

Staff Sgt. Melgar was smart to leave some documentation behind. Same with him talking to his wife.

The Army, at one time, pushed troops to use the “buddy system”. Have the NCO’s bailed on that?

I wish he would have said more!

Everything I knew about SEALs is violated by the conduct of the two thugs who supposedly were also under secret investigation for other crimes. To think the brotherhood was sacrificed for money. Was it hundreds of thousands?

The tragedy here is that a series of stupid actions, on the part of the SEALs, led to the death of an honorable serviceman, the destruction of the careers of two highly trained and valuable Spec Op troops and the tarnishing of a respected service.

I don’t know. I’m thinking it was planned.

Possible. But if so, these had to be the two stupidest men alive, or they were very drunk. There are a number of ways in which they could have eliminated Ssgt. Melgar, which would not have pointed back to them. Yet, they seemingly had no plan to cover-up their involvement in his death. On top of that, they concocted a really weak, stupid story as to how they killed him. Anyone who watches any cop shows on television should expect to become the number one suspect in a criminal investigation of the death and this is likely to turn up the theft which sparked it.

Personally, this sounds like the death was as a result of some type of physical altercation and was not planned. It could have been intentional. But, if so it was incredibly stupid.

dudes who would do that to a team member are NOT valuable. they are scum.

The training, deployment and maintenance of Spec Ops personnel is very expensive. This makes any special operator valuable, as long as he does his job. What apparently happened here is that two of these operators, in whom we, the American people, had a high investment, committed a stupid crime [one which will likely turn out to be petty]. This was enough to get them kicked off the Team, probably out of the service and possibly put in jail. Then they compounded that stupid mistake by killing Ssgt Melgar. They destroyed their own value through their actions, true. But, we still had a lot of money invested in these two. And a lot invested Ssgt Melgar.

Hope the Navy judge doesn’t hold the same school of thought as the Bowe Bergdahl judge. It sounds like there is a strong case, if convicted there should be no mercy.

It does sound like a strong case. I hope Melgar gets justice.

that judge was an Air Force JAG.

“SEAL Team 6”, or Development Group (DEVGRU) is supposed to be the navy’s counterpart to “Delta Force”, also known by other names.

DEVGRU candidates are supposed to be very carefully chosen from the “normal” SEAL teams.

And yet this is another example of serious criminal activity in their ranks. The founder of that unit, Richard Marcinco, was a common crook who served time in prison. But hey, he could swim pretty good.

The navy needs to get out of the business and leave it to the grownups and professionals.

“…founder of that unit, Richard Marcinco, was a common crook…”

“Marcinko’s choler stems partly from the fact that in 1990 he was convicted of conspiracy to defraud the government: As leader of an anti-terrorist unit, he helped a vendor get government contracts for grenades in return for a kickback of about $100,000 to a company of which he was a silent partner. He served 15 months in prison and was released in July. Marcinko glosses over the case in his book, but asked by his coauthor if he was guilty, he replies, “Absolutely. Guilty as charged. Guilty of putting my men before bureaucratic bulls—t. Guilty of spending as much money as I can get my hands on to train my men properly. Guilty of preparing men for war instead of peace. Of all these things I am indeed guilty. Mea culpa, mea culpa, mea maxima f—ing culpa.”

Such belligerence suffuses Rogue Warrior, which Marcinko says he wrote to defray his six-figure legal expenses. The book argues that his prosecution was little more than a vendetta by military brass humiliated by Marcinko’s final assignment, Red Cell. In 1984, at the behest of Adm. James “Ace” Lyons, a deputy chief of naval operations, Marcinko formed Red Cell, an antiterrorist outfit that staged mock attacks on military installations here and abroad and exposed their security flaws. The unit planted bombs near Air Force One, took over a nuclear submarine base, even kidnapped admirals—and videotaped it all. “I’d tell them Red Cell was coming, eat them alive, and then show the film and rub their noses in it,” Marcinko says proudly. A high-ranking Navy official says there was no vendetta and that “the general take was that Red Cell was a good thing,” but even Marcinko’s supporter, Lyons, admits, “Dick can get carried away.”
http://people.com/archive/born-to-raise-hell-vol-37-no-17/

IF he was “doing it for the troops”, he wouldn’t have had $100,000.00 kicked back to himself. That makes him a common white collar criminal, no different from all the “feather merchants” who profit illicitly by padding government contracts, or those in purchasing who take kickbacks funded by that padding.

“himself” should be a company in which he had a financial interest. I really wish we had an edit function.

You sound like quite the expert. I see in addition to these two you’ve heard of Marcinko. Perhaps you can provide us with a comprehensive list of the crime wave perpetrated by members of DevGru. Or USN SPECWAR in general.

Meanwhile I’m sure none of “adults” at Army Special Forces have ever committed any crimes in its entire history.

Actions, like those attributed to the SEALs involved in this case, tend to tarnish the reputation of a military unit or service. That is why such things are usually handled quietly under the UCMJ. And, there is no unit of service which has not had members court martailed for criminal offenses. So, this incident should not be used as an indictment of the Dev/Gru.

The military is made up of people. And people are neither all saints nor all sinners. So, incidents will occur. But, human nature being what it is, it usually takes ten saints to offset the damage done by one public sinner, in the minds of the public.

Too bad this couldn’t have been handled in the traditional way. Say nothing publicly, but send the pair out on a night recon mission towards enemy lines. Then spotlight them when they’re just about there.

Imagine what else is going on in the US military after 8 years of commander in chief who was himself a traitor?

Why is it that every Navy SEAL is on “Seal Team 6”? Don’t Seal Teams 1 through 5 have any members?

Are you sure you’ve ever met an actual SEAL? I’ve never known one to lie about their BUD/S class and what teams they were on. They’re usually quite proud of what they’ve accomplished, but they’re not braggarts. A very small percentage of the population could have done what they have done. It’s a small community; only about 2,000 men are on active duty. I’m not one of them. I was intel. I would never lie about being a SEAL, and I can’t help but think any SEAL who found out that another SEAL who was never DevGru but was going around saying he was would get the same kind of treatment a fake Navy SEAL would get.

Like I said, it’s a small community. They know who is and who was recently DevGru and who wasn’t. By name. If a SEAL is lying about it they won’t get away with it for long.

There are about a dozen confirmed SEAL Teams, but SEAL Team 6, ironically, is not officially one of them. They’re a specialized counterterrorism outfit operating as part of the specialized warfare development group.