“There is no motive that would justify hitting somebody from behind and breaking their ribs and damaging their lungs.” 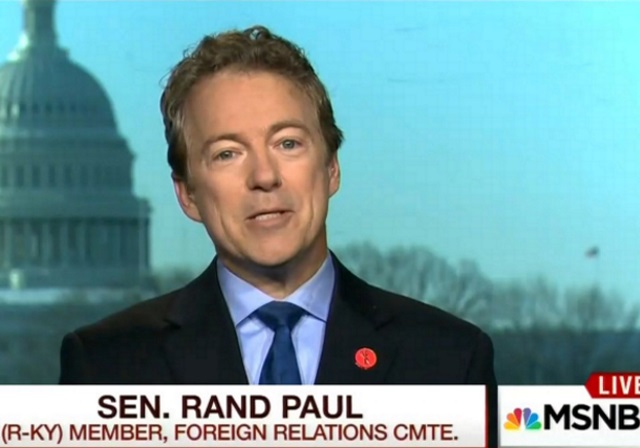 Sen. Rand Paul (R-KY) returned to Washington, D.C., on Wednesday after his neighbor allegedly attacked him and broke his ribs and punctured his lungs. He spoke with The Washington Examiner upon his return and opened up about the attack:

“From my perspective, I’m not really too concerned about what someone’s motive is. I’m just concerned that I was attacked from the back and somebody broke six of my ribs and gave me a damaged lung where at least for now I have trouble speaking and breathing and now I’ve hurt for 10 days,” the senator said after arriving back in Washington for a week of critical votes.

At first, it was reported Boucher attacked Paul over landscaping, but Kemberlee blogged that signs point to the attack being political. Even Paul’s neighbors think the landscaping excuse is laughable. The Washington Examiner continued:

Paul and Boucher share a property line in the gated Rivergreen community in Bowling Green, Ky. Several neighbors reached out to Secrets to reject early claims that the dispute was related to poor landscaping by Paul, and there has never been a complaint about that filed with the community’s homeowners association.

No official reason has been given for the attack and the lawyer for Boucher, 59, said politics was not the cause. Social media posts from Boucher show that he is aggressively anti-Trump and anti-Republican.

Paul said no motive of Boucher excuses his attack:

“Really if you told me he was doing it for some noble cause to feed starving children somewhere, there is no motive. There is no motive that would justify hitting somebody from behind and breaking their ribs and damaging their lungs, so no, there is no justification for something like that,” he said, pausing often to catch his breath.

The two-term senator said that he hasn’t talked to Boucher in a decade. “My first encounter was basically being hit in the back,” he said. “We’ve never had words over anything, we’ve never had a dispute or discussion or words,” added Paul, who was at the Republicans’ Congressional Baseball Game practice when members under fire by a gunman angry at the GOP.

Paul said in this case, “there is going to be a criminal prosecution,” and felt limited in what he could or wanted to say about the case.

Asked about his recovery, he tried a bit of humor. “I would assume it gets better,” he said, adding, “I’m about 10 to 11 days out. Physically I’m in less pain. I just am still having trouble completing sentences because I have to get enough air to expel so there is a little difficulty going still with breathing.”

Since Paul is an elected official, Boucher could face federal charges, which means jail time.

The developer of Rivergreen spoke to the Louisville Courier-Journal about Paul and Boucher. Jim Skaggs said that the neighbors have argued “over misplaced lawn trimmings and branches” through the years:

“I think this is something that has been festering,” said Jim Skaggs, the developer of the Rivergreen gated community in Bowling Green, where the two men live. “… I wanted to build a place where everyone could get along, but I guess that’s just impossible.”

Skaggs is a longtime Republican, but had harsh words about Paul:

Paul “was probably the hardest person to encourage to follow the (home owner’s association regulations) of anyone out here because he has a strong belief in property rights,” said Skaggs, who is the former chairman of the Warren County Republican Party.

Skaggs noted the 13 pages of regulations governing the gated community are extensive. But even from the start of Paul’s residence in Rivergreen, Skaggs said Paul has been difficult to work with.

“The major problem was getting the house plans approved,” Skaggs said. “He wanted to actually own the property rights and build any kind of house he wanted. He didn’t end up doing that, but it was a struggle.”

Imagine that. A libertarian who wanted to OWN his property!

“The Paul’s landscaping looks just like everyone’s place in Rivergreen. Wish I could get him to cut my lawn,” said neighbor Robert Warner. “As a friend, neighbor and senator, Rand has been first class in every way. What I find amazing is the fact that he cuts his own grass. Our neighborhood is fortunate that the Paul’s live here,” he added.

The neighbors even lashed out at those who have speculated motive, especially when it turns negative on Paul:

“The stories of a ‘landscaping dispute’ or a dispute of any sort between Rand Paul and Rene Boucher are erroneous and unfounded. The reason for Mr. Boucher’s bizarre attack is known only to him. Statements to the contrary are irresponsible and unnecessary,” said neighbor Travis Creed.

He added, “Speculation regarding Boucher’s motive has led to an unfair characterization of the Pauls and their home. The Pauls are and always have been great neighbors and friends. They take pride in their property and maintain it accordingly. Rand has enjoyed working on and maintaining his lawn for as long as I have known him.”

But Paul is correct. There is absolutely NO EXCUSE to attack someone out of the blue, especially when they’re helpless. Paul had ear plugs in his ears and Boucher attacked him from behind. It’s a coward move to attack anyone who is in a defenseless position.

That guy needs to go to jail for a long time. It’s one thing to punch someone out of anger due to a verbal altercation (though still criminal). It’s another to pummel until ribs are broken. If he gets away with this, it’s going to promote to the radical Left they can get away with anything they want to.

Yep. Which will eventually result in people getting killed.

Which will eventually result in more people getting killed.

Boucher should be charged with attempted murder and grievous bodily harm. But for the grace of G-D, the broken ribs and punctured lung might have been fatal.

The social media comments by Boucher anti Trump rants may lead to a charge of diminished capacity on his part,

how is this that different to the attack on (R)’s at the baseball game – both unprovoked attacks.

Unprovoked? Aren’t you paying attention to the new Dim logic? Speech they don’t like is “hate”. Hate equals “violence.” And the proper response to violence is violence.

thanx 4 clearing that up ?
now, what is the question for answer=42 😉

Boucher should be charged with attempted murder and grievous bodily harm.

Boucher’s tackle seems likely to have been inspired by an incident in 2004 when one thug named Al Franken tackled a critic of Howard Dean. He should have been charged at the time for battery, but his fellow Democrat took that one passively for the Party.

Paul is not my kind of guy but I surely wish him well.

Justice will be when Boucher is beaten within +/- one inch of his life in prison.

The initial reports by the Media Obfuscation Complex that Sen. Paul suffered “minor injuries” remain unexplained. There is no bizarro universe, even inside Washington, and certainly nowhere in Kentucky, where three displaced rib fractures, two other rib fractures, and lung contusions could be dismissed as “minor injuries”. (Or is it six ribs injured? The news can’t even get that straight.)

This would be like the Sunday papers on December 7 describing the Pearl Harbor attack as “heightened international tension”.

While on the topic … I’m also skeptical of the entire concept of a 59 year old retired anesthesiologist inflicting that level of damage. Even if the good ex-doctor is a serious amateur boxer, five (or six) broken ribs is a very unlikely injury. Four ribs are relatively fragile, the “floating” ribs; but anything more than four implies a weapon (a Louisville Slugger would do nicely) or some serious kicking after Paul is down. Nothing like that was mentioned in the news.

I find it interesting that very, very few people will use the correct word in describing the attack. What is that correct word?

It’s cowardly to attack someone from behind, when that someone isn’t looking and isn’t even aware. It’s cowardly to savage someone who is in no position to defend himself.

I know, I know, in war it’s different. But this wasn’t war.

If the assailant had challenged Mr. Paul to fisticuffs, mano-a-mano, he’d still be an assailant, but there would be a basic male understanding that he at least went about it the right way.

At first, it was reported Boucher attacked Paul over landscaping

That sounds just too much like a lefty journalist wanted to burn that lie into the public brain before the facts of the incident became clear. It’s more like evidence of a lefty conspiracy to tar Senator Paul and confuse the issue than like a real ‘report’ of the attack.

It’s a coward move to attack anyone who is in a defenseless position.

Which is what the ‘reporter’ did to justify the attack by inventing a dispute. He wanted Paul on the defensive, and his cowardly fiction served that purpose.