GOP Loses Another: Lamar Smith Retiring at the End of His Term

GOP Loses Another: Lamar Smith Retiring at the End of His Term

Has served in Congress since 1987. 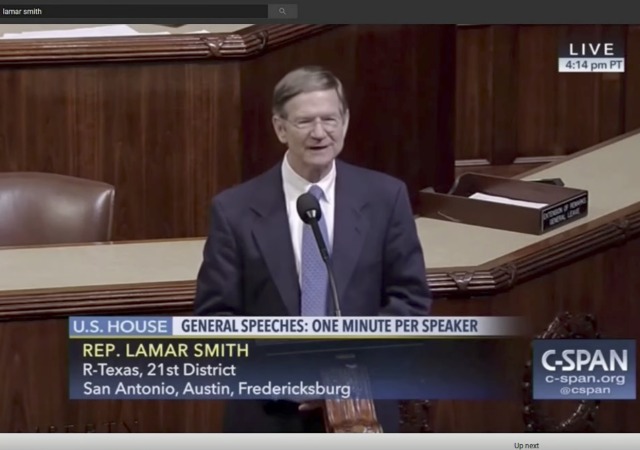 Several GOP lawmakers have decided to retire at the end of this term and another one has joined the ranks: Rep. Lamar Smith (R-TX), who represents the 21st district, which includes San Antonio. From Texas Tribune:

“For several reasons, this seems like a good time to pass on the privilege of representing the 21st District to someone else,” he wrote in an email obtained by the Tribune. “… With over a year remaining in my term, there is still much to do. There is legislation to enact, dozens of hearings to hold and hundreds of votes to cast.”

Smith, a San Antonio native, received his undergraduate degree from Yale and attended law school at Southern Methodist University. He was elected to Congress in 1987 and represents a district that spans Austin, San Antonio and the Texas Hill Country. He is the current chairman of the U.S. House Science, Space and Technology Committee.

Smith told reporters on a conference call that “there’s nothing else I would rather be doing,” but he feels “relieved” by his decision. A reporter asked him if the decision came because of a “toxic political environment” and he said it did not.

The Texas Tribune reported that Smith’s name has come up as possible lawmakers who would retire. But some believed he should stay because he is respected across the aisle and could have taken over as chairman of the U.S. House Homeland Security Committee.

Smith has received a lot of criticism for his doubts on man-made climate change, but that has not swayed Democrats from him, many of whom have “described him as a pragmatic chairman and colleague who would listen to their arguments.” However he has provided evidence to back his points:

In a 2015 op-ed in the Wall Street Journal, he described global temperature increases over the past 15 years as “negligible” and said links between climate change and worsening weather events had been debunked. During the latter half of that year, he sparred with the head of the National Oceanic and Atmospheric Administration over the methodology of a study that agency scientists published in the journal Science. (The study found that a widely publicized “lull” in the rate of global warming, a cornerstone of conservative arguments against climate change-related policies, resulted from faulty statistical methods.)

But will the seat remain Republican? It’s obviously been a safe GOP seat because Smith has represented that district since 1987, but there’s a chance it could become Democrat:

Smith’s 21st Congressional District runs from South Austin along the west side of I-35 into San Antonio and extends westward into the Hill Country. The district was drawn to be a safe Republican seat, but there is a competitive Democratic primary this year with viable fundraising candidates. One of the Democratic challengers, veteran Joe Kopser, raised more funds than Smith in the last quarter.

Democrats have argued for weeks that if more Republicans retire, they have a better shot at those open-seat races.

1987 till now is 30 years. That’s too long in government regardless of political party. Plus, during the previous decade or so, the Republicans don’t have much to brag about, so it’s all a wash, imho.

Thank you for your service and enjoy retirement.

That was my take as well. Seeing the long established politicians moving on is a good thing.

Hahaha…democrats can delude themselves as much as they want BUT no one actually wants their vision of political spite in control of anything other than the shit house…and even THAT is a stretch!

… because he is respected across the aisle …

Not exactly a sterling endorsement.

When I look at a Republican candidate, the first thing I consider is not how he will appeal to the Dems.

Notice the tagline that says San Antonio, Austin, Fredericksburg. 2 of these things are not like the other, and will tell you why an R is a moderate in this district.

i would prefer an honest (D) to a GOPe (R).
know who you friends are.

Actually I live in this area, all pretty liberal, think it could go Dem easily

Smith is Chairman of the House Committee on Science, Space, and Technology.

The Science Committee is responsible for overseeing a range of programs at NASA, the Department of Energy, the Environmental Protection Agency, the National Science Foundation and more.

I live in his district. Oversight of the EPA? I guess I missed that hour. I am very glad to see another RINO retire even if he is a nice guy and the Dems like him for whatever reason that might be. This is a good day.

You have to be suspicious of ANY Republican who is “respected” by Democrats.

Lamar has been one of the good guys, especially with respect to the Climate Change frenzy.

but I agree that 30 years in government is long enough for anybody.

30 years is a good retirement and if he is a patriot there are plenty of volunteer jobs – bet he becomes a lobbyist instead.

If you think 30 years is a sitting Senator is too long consider how many federal employees I have been on the job for 20 years.

This is an integral part of the entrenched Deep State that thwarts any meaningful reforms.

We need to start wrapping our head around the idea of term limits for federal employees.

GS13s below aren’t much of a problem. It’s the GS15s and the Senior Executive Service people who set the tone. They should be limited to five years and out.

Term limits for federal employees is simply stupid. Most civil service employees do the job that they are told to do. To do otherwise can result in punitive action. It is the senior management which has to be closely supervised and controlled by the leader of the Executive branch.

The biggest problem with most government operations is that they are horribly overstaffed. Law enforcement is usually the exception to that, in the civil government.