Group deems it “racist” and “anti-black. 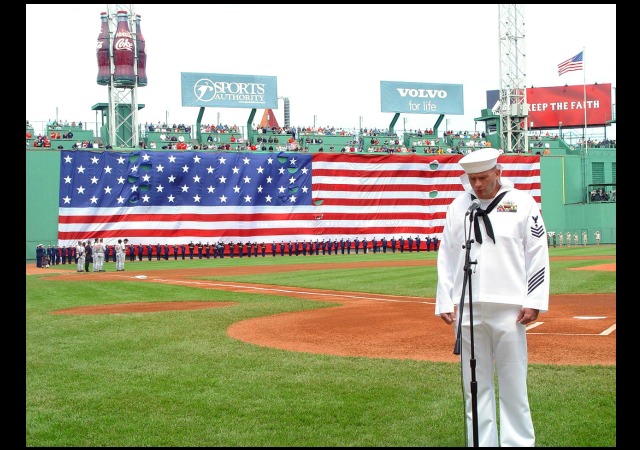 As Fuzzy noted when Alexandria’s famous Christ Church removed the plaque honoring George Washington (a founding member of that institution):

Now, a battalion of social justice warriors is targeting the national anthem:

When California lawmakers return to the Capitol in January, the state chapter of the NAACP will be seeking their support for a campaign to remove “The Star-Spangled Banner” as the national anthem.

The organization last week began circulating among legislative offices two resolutions that passed at its state conference in October: one urging Congress to rescind “one of the most racist, pro-slavery, anti-black songs in the American lexicon” as the national anthem, and another in support of former San Francisco 49ers quarterback Colin Kaepernick, who launched a protest movement against police brutality among professional athletes by kneeling when “The Star-Spangled Banner” was played before games.

I would like to remind our state’s politicians that we have dams that are in danger of collapsing, our brush and housing construction policies contributed to wildfires that slammed our prosperous wine country, and we are having serious outbreaks (bordering on outright epidemics) of infectious diseases. Social justice drama focused on the “Star Spangled Banner” is unproductive, childish, and likely to make our state more of a national mockery than it is.

How ludicrous is this charge? The organizers of this inanity had to dig down to the rarely sung third stanza to support their changes of racism.

Huffman, who could not be reached for comment on Thursday, told a local CBS TV station that The Star-Spangled Banner is “racist” and “anti-black.” She referred to an infrequently-sung third stanza that includes the lyrics, “Their blood has wash’d out their foul footstep’s pollution/No refuge could save the hireling and slave/From the terror of flight or the gloom of the grave.”

I really wonder why this issue was never brought up during the 8 years of Barack Obama’s administration?  It’s not like a different set of words were being sung between January 2009 and January 2017.

Should the state’s representatives agree to take the next step, the move would likely to increase California’s reputation as the…nuttiest and most unpopular state in the nation. We would be the Hillary Clinton of states!

The response is what you would expect, at least from those with a basic knowledge of history, civics and decency.

California NAACP is offended by the National Anthem The Star Spangled Banner. I’m offended by their stupidity, race baiting, and blind loyalty to the Demokkkrats. I love my anthem and my POTUS Donald Trump. So those NFL idiots kneeling was against the anthem after all eh?????

YOURE NOT A TREE, GO.https://t.co/2jOMIrB9MG

NAACP is racist organization. It should be disbanded. They are Anti American ,Christian. & White. https://t.co/Qjra0ngl1o

While Francis Scott Key composed the words in 1814, after witnessing the massive overnight British bombardment of Fort McHenry in Maryland during the War of 1812, and the music came later. Throughout the 19th century, the song was treated as the de facto anthem by most branches of the U.S. military. In 1916, an executive order by President Woodrow Wilson formally designated as such. In March 1931, Congress passed an act confirming Wilson’s presidential order, then President Hoover signed it into law.

The main complaints about the anthem to this point is that it is hard to sing and it is hard to memorize the words. However, in the unlikely event that Congress agrees to this California NAACP stupidity, you can be sure that the group will find something racist about the next tune offered.

Additionally. I suspect many Americans would consider giving California the NFL treatment.  While the state’s tourism industry has grown in the past 7 years, there are 49 states that also have amazing sites and less social justice craziness.

I think they are right. We should wipe out any song or even book with the word slave in it. That would fix everything. Lets see, start with Shakespeare, and don’t forget the Bible. Maybe the Torah, or the Talmud, I don’t know, but probably them too. Sounds like a plan.
SMH.

don’t forget the Queeran too!

unfortunately, we seem to be infecting the rest of the country as well.

Wow. Just wow. The “hireling and slave” in the song is the British enemy, whose forces were overwhelmingly white. Yes, those are used as terms of abuse; so what? There’s still no racial dimension. It’s no different from the terms of abuse we always heap on our enemy, whoever it might be.

What’s more, even if the NAACP’s theory were correct, that Key meant the “slave” in the song to refer to the blacks who fought for the British because a British victory would have meant the end of slavery, that would still not be racist. Key certainly despised those black enemies, because they were enemies, not because they were black. He despised them no more and no less than their overwhelmingly white comrades in arms.

That would be the plain meaning and intent of the phrase: “No refuge could save the hireling and slave”. The NAACP has lost its way and credibility while staring into a black hole.

it refers to the mercenaries and conscripts in the British forces” “hirelings & slaves”, which is an apt description.

I don’t think it does refer to them specifically. I think he was not using those words literally, but as terms of abuse, showing contempt for the enemy in general, as is customary in war. He might just as easily have used terms like “cur” or “lickspittle”, but he needed something that would rhyme and scan with the other lines in the verse, so “hireling and slave” it was.

If anybody heard me sing it, they would apply for British citizenship immediately.

the NAACP wants to start a race war besides a cultural one.
i’m sure they are pro abortion and anti marraige –
the biggest problem for the black ‘community’ is the HIGHEST abortion and least married as a percentile.
and THIS is their #1 ?
if CA passes this then I welcome them to leave the USA –
don’t know who will protect them from outside forces – maybe the 49ers will take the job, no one will be cheering for them at the stadiums – once the breakup, where will the mexifornians go to ?

the other 56 states will hrow a heavy tax on everything from Mexifornia – also where will they sell the produce and other stuff to, ya know they will leave a sour taste in my mouth.
jes sayin docha know. 😉

It is the process. Destroy the culture and its history so that the USA may become part of a brutal utopian paradise. There will always be a next target.

The absurdity of the NAACP claim just means the real slavery culture is long gone. If we react to the content of their claims with logic, they win. We must react per Alinsky — ridicule, cut off funding, etc. This is a street fight not a discussion. The left knows it. We do not need to use their violence but we can stop feeding the beast with $$. Bullies only respect forceful action. Notice how quiet the “Rocket Man” has been lately?

Difficult to memorize? Seriously? How many of you know Christmas songs by heart, American Pie by heart, Stairway to Heaven by heart? Cmon! My kids sang the SSB each week in school. I wanted those words ingrained in their hearts and minds.

I don’t care one way or the other about the 3rd verse, or even the 2nd, but the 4th is the heart and soul of the song, and ought never to be forgotten, even if, in the interest of saving time, it’s not always sung.

This is as absurd as what happened in a high school in the DC district. The teacher used the word “Niggardly” while lecturing the class and afterward, was called into the principal’s office to explain the racially insensitive term “Niggardly”. From that day on, he and all other teachers were forbidden to use that word again. This is what happens when the chip on one’s shoulder is so big that everything is an insult. Niggardly means cheap or stingy BTW.

I used the word niggardly in our office and a woman immediately said I was racist. Rest of the staff joined me in explaining the true definition and calmed things a bit.

Um, no. You are misremembering the case of Stephanie Bell in Wilmington, NC, and perhaps conflating it with that of David Howard 3 years earlier.

Basically, the NAACP is advancing the position that Americans should have respected slaves that fought under the British flag against Americans and freed slaves. This is not so different from what happened in South Africa, where the Mandela faction was employed by progressives to defeat dissenting blacks while they opened abortion fields to defeat resisting native South Africans.

This is all about power, and money. Facts, fuget aboud it. The people that the NAACP are targeting are the same people who believe that there is a massive conspiracy by WASP Americans to discriminate against Black Americans and other minorities. In other words, the ignorant.

As for the use of the word “slaves” in the third stanza of the Star Spangled Banner, why would Francis Scott Key be worried about American slaves? There was no slave rebellion in the US. There was no significant number of former American slaves swelling the ranks of the British and Hessian units. In factr, Black Americans made up a significant portion of the US forces, with some 15% of US Naval personnel being black. Black Americans, many who fled slavery during and after the War of 1812 fled to Canada, mostly Nova Scotia and settled there.

Now, Francis Scott Key was a slave owner. Between 1801 and 1830, he owned seven slaves. In the early 1830s, he manumitted [freed] those seven slaves and some continued to work for him for wages. He also represented a number of slaves who sere suing for manumission. And, while not supportive of the Abolitionist Movement, whose policy of instant manumission and incorporation into American Society he viewed as being short sighted and liable to destroy the fragile Union, he was a supporter of manumission and a return to Africa for former slaves [American Colonization Society]. Not really what one would think of as being a racist.

Solution for these freaks: don’t come to the game.

But, we know it’s not about that. It’s about a fascist movement in the nation, and a gang of useful idiot wanna-bees.

We need to stop circulating and legitimizing this ludicrous, self-appointed term.

These degenerates are antisocial and anti-society by nature, creating kangaroo courts outside of our justice system, cowards whose constitutional rights are defended by real warriors—our men and women in uniform.

Not social, nothing to do with justice, and definitely not warriors by any measure.