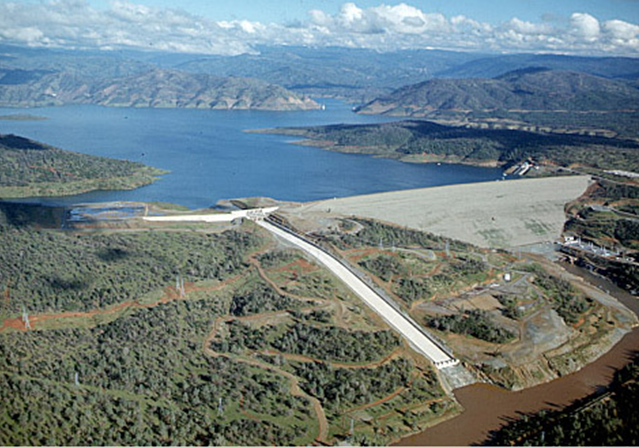 Repairs at California’s Oroville Dam, center of an last weekend’s emergency evacuation order, continue as the water levels in the lake steadily decline and the set flow rate is decreased.

[The Department of Water Resources] is reducing releases for two reasons. First, it needs lower water flows so it can get work crews stationed on the diversion pool, the stream directly beneath the spillway that leads into the Feather River. The pool has gotten clogged with debris from the giant crater that was discovered on the spillway Feb. 7, backing up water to the dam’s hydroelectric plant. That’s made it impossible to operate the power plant, which is capable of releasing water at 14,000 cfs.

The second reason is that, as the lake level decreases, it becomes harder to push water out of the spillway at a high rate.

Meanwhile, officials are reviewing the incident and the response and are coming to the conclusion that if there had been a catastrophic failure of the dam, thousands of people would have been trapped by the flood waters.

Six years ago, California’s water officials warned federal officials that the evacuation plans for the area were inadequate and needed improvements. Though some of the recommendations were adopted, those that included routine community briefings and improving escape routes were not…with obvious consequences:

The shortfalls in organization as well as infrastructure to quickly get residents out were on full display in the chaotic hours after the evacuation order. Residents found themselves caught in traffic jams for hours on clogged roads, leading some families to abandon their cars. While many local officials and ordinary people rushed to help direct traffic and staff emergency shelters, evacuees also reported seeing fistfights on gridlocked roads.

…Asked Friday whether residents immediately downstream would have time and warning to get out if the dam itself failed, Sheriff Kory Honea in Butte County, where Lake Oroville is located, answered, “it’s a very, very daunting challenge.”

“That is why we’re taking steps now to refine our notification plan and our evacuation plan, potential evacuation routes, in hope that we can give people more time to exit the area should that happen,” Honea said.

A good example of the challenges associated with rapid evacuations of large areas and population centers include jammed gas stations with limited fuel supplies.

Subsequently, some cars ran out of gas, contributing to the chaos and confusion.

CHP spokesman Ryan Lambert in Oroville said drivers themselves were a problem on Sunday night, slowing traffic in some instances and causing hazards. He listed the issues CHP was dealing with: “Unprepared citizens who were running out of gas and their vehicles were becoming disabled in the roadway. People were utilizing the shoulder, driving the wrong way. Traffic collisions were occurring. People fearing for their lives, not abiding by the traffic laws.”

“All combined, it created big problems. It ended up pure mass chaos.”

Another problem uncovered during the post emergency review process is that the manuals associated with dam operations have remained unchanged for nearly 50 years.

…Two of the biggest floods ever to hit the region have occurred since the Oroville Dam manual was written; on its sepia pages, it’s as if they never happened. The story is the same for all 54 of the state’s primary flood-control dams, whose manuals are 30 years old or older.

“California’s flood infrastructure is based on the hydrology of the past,” Jeffrey Mount of the Public Policy Institute of California told The Bee. “I don’t know a scientist anymore who thinks the future is going to look anything like the past.”

Unfortunately, Governor Jerry Brown was listening only to scientists who believed in man-made global warming, assumed that the drought would last forever, and wanted to divert resources to vanity projects and supporting illegal aliens.

If Californians don’t want to relive this scenario, possibly with an actual catastrophic failure, then they should review their choices in 2018 and remake the political infrastructure.

Somehow I don’t believe that the voters in California will decide to dump Gov Moonbeam, even if there is a catastrophic flood. There is no cure for stupid.

The members of the Congressional Black Caucus got elected, too.

Till we break the democrat media, this will continue.

Our hispanic legislature could not care less, and it is becoming ever-more entrenched.

They ran from Mexico to get a better life – free from their governmental and cultural disfunction.

Now that they’ve got it, they want to import it their new home.

The epitome of stupid.

In related news, nobody died from Global Whatever.

“Six years ago, California’s water officials warned federal officials that the evacuation plans for the area were inadequate and needed improvements. ”

Huh? Talk about passing the buck.

Yeah, that caught my eye too. Why on earth would anyone think it is the responsibility of someone in Washington DC to establish evacuation plans in their local community?

And furthermore perhaps these people should re-think their decisions to purchase homes and build businesses below a massive dam. Kinda like the whole gnashing of teeth when New Orleans flooded… OF COURSE it’s going to flood. It’s not a question of if, it’s a question of when.

Back in 1972, Agnes came through and put some businesses in my community under 12 feet of water.
Now, 45 years later, they are building new homes in the flood plain.
Stupid is as stupid remembers.

That was when King Barry said he could walk on water and make sea levels go down and make the sun shine 24 hours, seven days week. Of course the disciples believed every word he said. Now with reality staring them in face, they are whining, because their handouts are no longer forthcoming.

minor nit: i believe the dam in the picture is Folsom dam, nor Oroville…

the solid concrete emergency spillway is a giveaway. 😉

The image is taken from the website for the Oroville Dam.

I was reading a twitter feed during the crisis and it seems that there was a lot of panic and misinformation.

Part of the problem was the word – Oroville Dam spillway.I wonder how many people just heard “dam” and thought the whole lake was going to drain out. They should be using Oroville Lake as the main identifier and then spillway and overflow.

When I was looking for some water flow information, I could not find anything that gave a good overview of the whole drainage area. The Tulsa District of the Corps of Engineers has a great site. Here is the basin map for the Upper Red River http://www.swt-wc.usace.army.mil/upperred.html

It is easy to see the status of the system in one map and it is easy to drill down for more information. The weird thing is that the Corps is not consistent in presentation for their districts. Maybe there are just more Corps-controlled dams in this area.

Liz, you appear to say the dam is administered by the Corps of Engineers. It is not. It is under the control of the California Department of Water Resources. https://www.theatlantic.com/national/archive/2017/02/how-did-the-oroville-dam-get-so-bad/516429/
California will do what it dam well pleases with it, and they please to divert monetary resources to blue counties, not red counties. Case in point, California got Obama stimulus funds to repair dams, and spent it on Folsom Dam which was in better condition than Oroville Dam.

Sorry to mislead you – I was looking for info on the CA water system and couldn’t find something that was easy to see a good overview. I realized that the CA system was not part of the Corps system.

I included the link to the Tulsa District Corps site because it is a good example of information on a water system. I visit Lake Texoma (Dennison Dam) and use the site a lot to check water levels. If you know it rained in the watershed, you can easily track the flow of water to the lake. I’m sure the engineers are looking at tables of numbers, but for a casual user, the graphics are nice.

I probably wrote the comment before the full effect of the coffee kicked in!

The entire lake was in danger of draining completely. If either spillway had been undercut back to the lake itself, the entire lake would have drained.

The concrete lined spillway cut down hill instead of uphill, so the danger there was reduced. But the emergency spillway erosion started to undercut itself and. from what I could tell, possibly undercut the main spillway.

Had either spillway been undercut, the majority of the lake would have drained into the valley.

“I don’t know a scientist anymore who thinks the future is going to look anything like the past.”

Most of our knowledge of physical processes is inductive, and depends on an assumption of isotropy (so we can make educated guesses about what’s going on at a distance) and invariance (ditto for events remote in time).

Here, the properties of water, gravity, dirt, and Californians haven’t changed much in a while, and we don’t seriously expect them to change much in the future.

I was just talking with a former City of Oroville public official. In conversations with State of California officials in 2002, the potential for failure of the spillway and the dam were discussed in detail. The local experts’ concerns were denigrated by the State officials in a very patronizing way.

Oh well, it is all very consistent, California has a death wish, and is doing everything it can to destroy itself. Suicide by leftist ideology and arrogance.

Major note here: all these water projects were built by GOP governors.

NOT A SINGLE WATER PROJECT IN CALIFORNIA HAS BEEN BUILT BY A DEMOCRAT GOVERNOR.

Water projects take a long time to engineer and build. Everything was probably built according to standards at the time. Maintenance, renovation and disaster planning needs to be done continuously.

There should have been continued planning of increasing & preserving water resources. I would fault the entire government of California, regardless of political party.

Speaking of faults, do they even check the dams after major quakes? I noticed a story here there has been a few minor quakes attributed to the rapid removal of the water.

The point wasn’t about the standards of the time: my point was about who is responsible for water projects in California, period. It wasn’t the democrats.

As or maintenance, this WAS – and is – a democrat problem:

But hey, they have a multi billion dollar train to nowhere, who need dams, right?

give them not $1.00 in federal aid. Cut all federal funding now.

California’s drought is OVER.

It is not a warning, because that implies someone is there to receive and heed that warning. The California State Government and the Democrats do not believe in reality and substitute their own.