Wine Country wildfires near containment after almost a month

Wine Country wildfires near containment after almost a month

Environmentalists offer data-based analysis on the likely cause of these devastating blazes and some practical solutions. 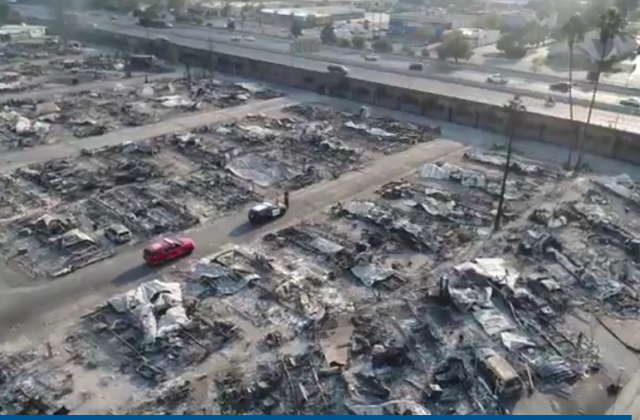 Wildfires have been ripping through California wine country since early October, devastating the productive and scenic region.

As we approach the end of the month, the fires are nearly contained and the enormous scale of destruction is becoming more clear.

Cal Fire said Friday there were 7,700 structures destroyed, so Monday’s increase to 8,400 represented a significant jump and includes homes as well as other structures. There remain five large fires burning in the Northern Bay region of the state, although many were at least 90 percent contained as of Monday morning.

The wildfires in the state’s wine country started Oct. 8 and have claimed at least 42 fatalities, with 23 of those from Sonoma County. There were 21 people still missing in Sonoma County as of Monday morning, said Misti Harris, a spokesperson for the county sheriff’s office.

The investigation into the cause of the fires is still ongoing, and Foxworthy said it could still “be weeks” before the probe is complete and details are released.

Legal Insurrection readers will recall that Governor Jerry Brown blames climate change for these conflagrations and is using that as an inspiration to file lawsuits against the Trump administration.

However, one expert asserts that the root cause of the fire is “reckless development”. Gregory L Simon, Associate Professor of Geography and Environmental Studies, University of Colorado Denver, concludes that it is wrong to blame climate-change for a man-caused disaster.

As these accounts suggest, threatening wildfires are frequently portrayed as a byproduct of warming weather, stubborn high-pressure zones and dry western landscapes.

But what about the institutions, reckless policies and billions of dollars worth of financial incentives that help produce dense human settlements and immense social risks on these landscapes?

Typically absent from the discussion are the powerful social and economic forces that turn historically active fire regimes into a string of deadly and costly wildfire disasters.

Across the Western United States, areas at the wildland urban interface (WUI) have seen a 300 percent population growth rate in the past 50 years.

Environmentalist and author Jim Steele recently published a detailed, science-based analysis of the root cause of the the wildfires . . . using actual data instead of emotion. Looking in detail at the fire components associated with these blazes (ignition, fuels, or spread), he also concludes the the fires are not the result of climate change.

And while the housing developments may have been a contributing factor, Steele offers action items to prevent the recurrence of wildfires like this.

…[K]een observers will notice that entire blocks of houses, and entire neighborhoods were completely burnt to the ground, in contrast to neighborhood trees that often remained relatively unscathed. This suggests that the high winds rapidly carried burning embers from the grassland and chaparral into these developments. While the trees did not trap the embers, the buildings did.

I would expect we will soon hear about investigations inquiring into why these residences were not required to erect more fire safe structures, especially when built in a known fire-prone habitat and a high wind corridor. The simple requirement of constructing eaves in such a manner that prevents the trapping of burning embers and fire-proof roofs may have saved many homes.

Indeed there are many lessons that will allow us to prevent such wildfire disasters in the future if we have accurately determined the causes of these fires. Cliff Mass notes that our short-term weather models had accurately predicted the time and place of the fiercest winds. That information could be used to temporarily shut down the electrical grid where power lines are likely to ignite fires. We can bury power lines below ground.

We can remove the high fuels loads that accumulated during a century of misguided fire suppression. Insurance companies can demand higher rates unless proven precautions are undertaken. It is those lessons that Gore, Clinton, Brown should be promoting to inform the public. Trenberth and Swain should be informing the people of the natural weather dangers that are inevitable.

There is no evidence that climate change, whether natural or anthropogenic, exacerbated the ignition, fuels or spread components of these deadly fires. And worse their obsessed belief that rising CO2 concentrations worsen every tragedy only distracts our focus from real life-saving solutions. [emphasis added]

As I noted in my initial analysis of climate change claims, focusing on infrastructure and brush-clearing policies would be a sensible step. However, this isn’t as glamorous as international meetings and filing lawsuits against the President of the United States.

“We can remove the high fuels loads that accumulated during a century of misguided fire suppression.”

Wouldn’t that require the governor to sign, rather than veto, bills intended to address wildfires before they strike?

notamemberofanyorganizedpolicital in reply to JBourque. | October 28, 2017 at 3:11 pm

Or if only they could have dropped all the “CRAP” that Jerry Brown spews out on those fires……then the fires would have been out pronto.

Jerk governor blabs all day long about climate change with zero evidence, but when he could have made a practical decision about a verifiable cause of deadly fires he blew it off.

There is no evidence that climate change, whether natural or anthropogenic, exacerbated the ignition, fuels or spread components of these deadly fires.

He left out the most critical of all, against which there’s no defense—imaginary climate change.

Back in the 80-90s, it was popular for some OKC-area home owner associations to write rules stating that roofs had to be wood shake shingles. It took was one home to be burned because of a fire next door and a lawsuit and those rules were declared illegal.

I’ve mentioned it before, Oklahoma has realized the fire danger of the eastern red cedar. There is a page on the forestry website that lets homeowners, tree removal companies, and users of cedar trees register their names so the trees can be removed and used for something. The cost of maintaining the webpage is certainly far less than dealing with fires in the rural-urban interface area.

I remember back around that time, something similar happened in Houston. There was a big fire in which several houses in a very nice neighborhood all burned down because it jumped from wood shake roof to wood shake roof. After that, wood shake was OUT. At least there!

Though I don’t know which wildfire it was, I saw on television this morning that a man has been arrested for starting one of the fires.

notamemberofanyorganizedpolicital in reply to AmandaFitz. | October 28, 2017 at 3:21 pm

Don’t forget the arson angle. Wasn’t some homeless type arrested for starting fires in one area?

Environmentalists have a sort of creeping stupidity about them that ignores historical evidence that runs counter to whatever idiocy they’re spewing at the moment.

Every spring when the snow melts off and the grass shows, farmers in Kansas burn pasture. They don’t burn *all* of it, just a fraction that hasn’t been burned in the last few years. It controls overly tall grass, red cedar trees, and invasive forbs (broadleaf weeds), and when done over the course of several weeks (mostly done by Easter), controllable. Farmers are exceedingly careful of wind, moisture, and weather conditions so the fire doesn’t get away, BUT environmentalists are all huffy about the smoke in the air.

So, they proposed that Kansas regulate and restrict springtime burning, and force a percentage of farmers to burn in the fall by pointing to a research paper on the Konza prairie that supposedly said “No problem, fall burning is great.” Thankfully, the Kansas House and Senate is made up of mostly farmers, who actually *looked* at the paper in question. Turns out, fall burning harms the grass, encourages erosion, and is the *worst* way to control weeds and cedar trees.

Score one for the good guys. The problem is these idiots keep coming back to the Senate every spring to whine about the smoke, and if they can wedge it through just *one* year, it would be a nightmare to get repealed.