Blazes have already claimed 10 lives in one of the worst fire days in state’s recorded history. 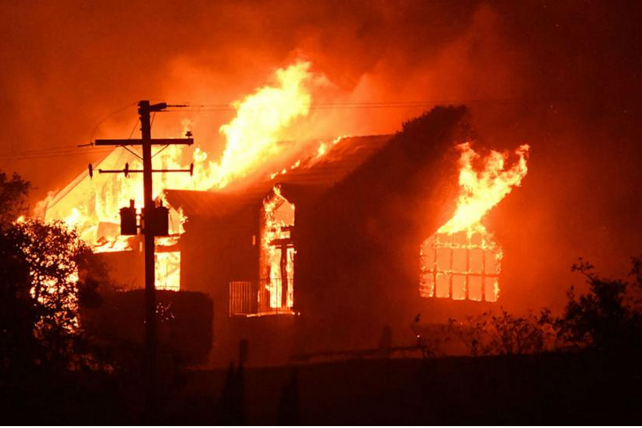 Over 20,000 Californians have fled raging wildfires in Northern California that have destroyed at over 1000 structures, the evacuation of 20,000 residents and claimed nearly one dozen lives so far.

At least 10 people have died and at least 1,500 homes, businesses and other structures have been destroyed as more than 14 fires ravaged eight counties throughout Northern California on Monday, authorities said.

The Sonoma County Sheriff’s Office reported seven fire-related deaths late Monday. In addition, two died because of the Atlas fire in Napa County, said a CalFire spokesperson. One person died as result of the Redwood Valley fire in Mendocino County.

The vast devastation over just a few hours made this firestorm one of the worst in California history, with Gov. Jerry Brown declaring a state of emergency.

Local hospitals were treating those injured while others are unaccounted for, officials said. Additional fatalities were possible as search efforts continued.

The wineries of Napa Valley and Sonoma are world famous, and this industry is one of the few successful earners for the state outside of Silicon Valley. Reports about damage have been mixed so far.

While there have been numerous reports that Napa Valley Stag’s Leap District winery Darioush had burned during the Atlas fire, according to the winery’s Alessandra Murillo in an email update, “At this time, thankfully, the winery is safe; we experienced some landscape and vineyard damage but the winery structure is sound.”

Updated Monday 4 p.m. Video footage that appeared to show William Hill Estate Winery burning was in fact capturing the burning of only the estate entrance sign and landscape around the winery. William Will Estate posted on Facebook in the afternoon that, “we have confirmed that the winery buildings are intact. William Hill sustained only minor cosmetic and landscaping damage, in addition to minimal vineyard damage.”

….In Sonoma County, the fire reportedly has destroyed Willi’s Wine Bar, The Fountaingrove Inn and the Hilton Wine Country Hotel in Santa Rosa. In Glen Ellen and Kenwood, residents have reported that Chateau St. Jean and a local lavender field are gone. Locals also report that fires are burning at Kenwood winery, while others note fire fighting efforts to try to save B.R. Cohn. The fire also appears to be close to Benziger winery.

A blaze on a Sonoma Valley ridge threatens nearby wineries, including Scribe and Gundlach Bundschu. The nearby Moon Mountain district, where wineries and vineyards are on steep, remote hillsides, are also at risk.

There is a potential the fires could leave a mark on this year’s vintages.

Harvest season is underway. Grape varieties ripen at different times, but many grapes have already been harvested by this point in the season, said Christian Butzke, professor of enology, or the study of wines, at Purdue University.

Still, grapes that survive the fires could absorb a smokey flavor from the air, he said, and will need to be checked.

“Luckily, it’s late enough that a majority of stuff has been harvested in September, and there’s not too much left, but you never know. There might still be things fermenting and people filling barrels with red wine,” he said.

Wine can absorb scents in rooms they’re being produced in, he said, so there is a chance smoke can affect taste.

Low humidity and high winds, more typical of an autumn day in Southern California, are contributing factors to the ferocity of the blaze. And while the region got significant rainfall this past year, it was not enough to quench the water-needs of the drought impacted vegetation.

In fact, Southern California’s Anaheim Hills is responding to a wildfire that has already resulted in the the destruction of 5 homes, directly impacted 4,000 area residents, and scorched up to 5000 acres.

Prayers-up for everyone impacted by this disaster.

At least it’s no longer criminal to knowingly infect someone with HIV in California. Oh, and they’ll soon be launching their own global warming-monitoring satellites…

You could be right. Three fires in different areas around Napa appeared on the same night. From the Napa Valley Register:

How did the fires get so out of control so quickly? I always pictured the Napa Valley as sparsely populated, but apparently not.

Arsonist read weather reports…. hot, windy, dry. Add to that the drive to keep California “natural” and not clear brush and other fire hazards.

10 blazes broke out within a 60-minute time period, according to one report I heard. Granted, this is wildfire season…but the implication is scary.