Similar threats have been reported in Oklahoma and New York City. 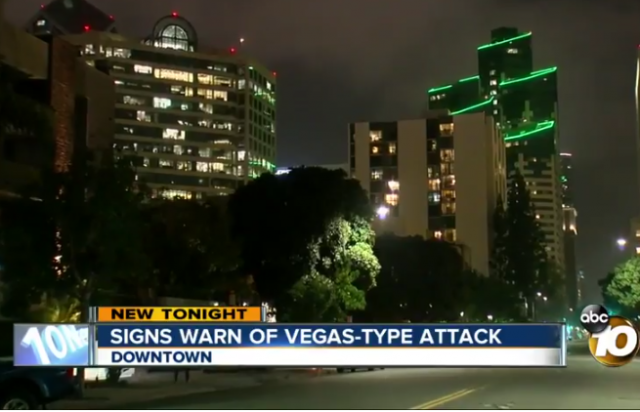 Recent conversations between my husband and me have taken an interesting turn.

As he was packing up for a trip to India this week, I asked him to give me the hotel list and flights, in case there as a terror attack or the flight disappeared on route. Then, I asked what he wanted me to grab in case there was a wildfire evacuation.

Today, he texted me that police were checking into threats of a Las Vegas-style sniper shooting in downtown San Diego.

People who live or work downtown told FOX 5 they received information from property managers regarding the threat. According to people who have seen a flier, a man said he was going to fire a gun from the roof or balconies of as many as four different downtown buildings. These include condo and business towers.

The flier also included the man’s picture and name.

One resident said police told them the man checked himself into psychiatric care on his own, and he does not own a gun.

Officers apparently told people they were distributing the information to property managers in abundance of caution and to notify people of the man if he makes additional threats when he’s released.

A police investigator told local reporter that the man suspected to be behind the threats is currently in a psych hold, but could be released this week.

There was a similar incident in Oklahoma earlier this month.

Several people sent messages to police alerting them that Robinson had posted on Facebook that he would kill people in those cities in a manner similar to Sunday’s shooting in Las Vegas, Mathews said.

A Facebook page that appears to be Robinson’s contained no such threats on Wednesday.

Jail records show Robinson, who is 39, remained in custody Wednesday. No attorney was listed to speak on his behalf.

Robinson was previously convicted at the state and federal level of making threats, including one that was inspired by the 1995 Oklahoma City bombing.

Finally, A New York City man is charged with threatening a Denver company and its employees with a Las Vegas-style attack if they didn’t pay him.

Victor Casillas, who is 34 years old and lives in Midtown Manhattan, was arrested by FBI agents Tuesday night. He is charged with making extortionate threats.

Prosecutors said Casillas threatened to “murder one or more employees” if the company did not pay him money.

The company, which was not named, markets a mobile app that allows users to review and obtain promotional sales offers from various retailers. The company pays referral bonuses to users who shepherd others to the company’s services.

Progressives have long pointed to gun control as the solution to spree killings and massacres. However, looking at these reports, we would be better served by addressing effective handling of mental illness when those who suffer from it are not getting proper care or supervision.

It’s impossible to confine all leftists to rubber rooms. Besides, think of the movement that would spring up advocating for free range nut cases.

There should be no doubt that the mental health treatment system in the US is a joke at best. Not only do you have people not getting the treatment they need you have people who are getting over treatment or unneeded treatment. (a.k.a. People who are on antidepressants for “life stress”, when what they really need is someone to tell them to suck it up and grow up.

Leslie, do you really trust the Ruling Class to define who’s “mentally ill” in light of their misuse of that from Stalin on?