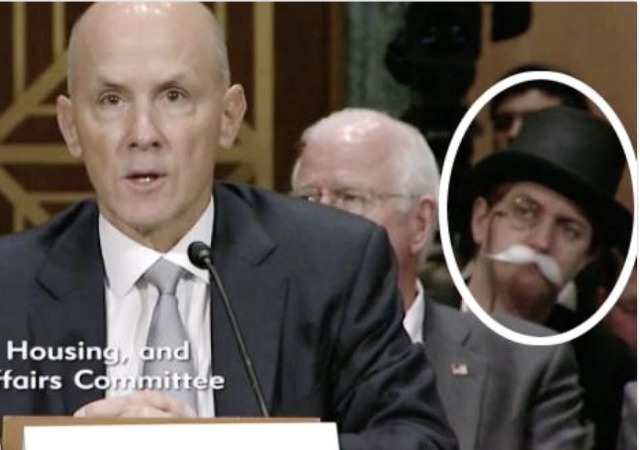 Amanda Werner, an arbitration campaign manager for Public Citizen, has attended the senate’s Equifax hearing dressed as the Monopoly Man. From The Hill:

Dressed in a top-hat, bushy mustache and monocle, Amanda Werner, arbitration campaign manager for Public Citizen, was visible over Richard Smith’s left shoulder in the Senate Banking Committee’s live webcast of his testimony on the company’s recent massive security breach.

Smith testified to the panel about the cyberattack on Equifax, which exposed the personal information of an estimated 145.5 million Americans, including Social Security numbers, names and birthdates.

Lawmakers this week are also grilling the CEO of Wells Fargo, which is under investigation for fraudulent sales practices including the unauthorized creation of up to 3.5 million customer accounts.

In a statement, Public Citizen condemned forced arbitration clauses that it says have allowed companies like Equifax to take advantage of consumers and avoid punishment, comparing them to a “Get out of jail free” card.

“Make no mistake: Arbitration is a rigged game, one that the bank nearly always wins,” Werner said. “Shockingly, the average consumer forced to arbitrate with Wells Fargo was ordered to pay the bank nearly $11,000. Bank lobbyists and their allies in Congress are trying to overturn the CFPB’s rule so they can continue to rip off consumers with impunity.”

We sent the Monopoly man to the #Equifax hearing to send a message: Forced arbitration gives @Equifax a monopoly over our justice system. pic.twitter.com/6pPtqLNPig

???? Mr. Monopoly is on hand at the @SenateBanking Committee to offer @Equifax‘s CEO a get out of jail free card as he testifies. #RipoffClause pic.twitter.com/no1rUj6bgG

Public Citizens is a leftist group, which bashes the supposed “GOP’s predatory and plutocratic agenda.” The website states:

President Donald Trump, his cabinet of billionaire robber barons and the corporate-backed Republican Congress are trying to plunder our nation’s wealth and resources by dismantling public protections, rigging the rules for their own personal benefit, and preying on American workers, consumers and families.

Atop their wish list is a rollback of the regulatory protections designed to protect all of us from corporate privateers, pickpockets, polluters and predators – the same people running the Trump administration and bankrolling Republicans in Congress.

The GOP’s corporate donors spent more than $1 billion to get their way in Congress. Demolishing public protections is a giveaway to these corporate interests that directly endangers the American people. It’s an escalation of the corrupt insider-dealing that candidate Trump campaigned against.

A holdover from Newt Gingrich’s Contract with America, the Congressional Review Act (CRA) allows Congress — by majority vote in both chambers, with limited debate, no possibility of a filibuster and the president’s signature — to override recently issued public protections.