Conservative groups have started to rally behind the congresswoman. 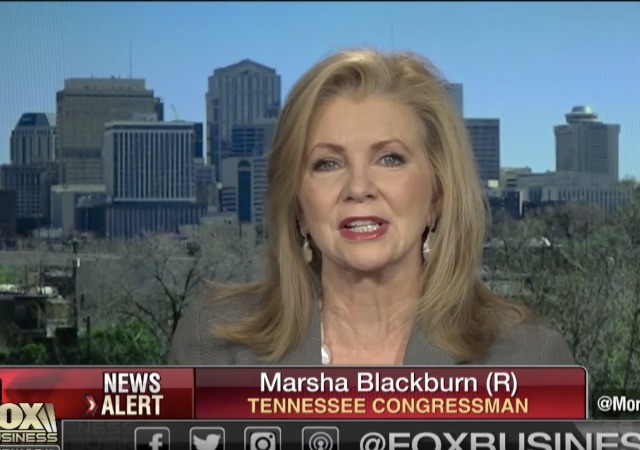 The Washington Examiner has reported that Rep. Marsha Blackburn (R-TN) has begun preparing to run for Sen. Bob Corker’s (R-TN) seat next year.

Corker announced he would not run for reelection in 2018, making Blackburn the most liekly successor with conservative groups rallying behind her.

The Examiner spoke with Dan Eberhart, a Republican bundler from Phoenix where he runs an investment firm. He had breakfast with Blackburn on Tuesday morning:

Blackburn is gathering internal data to assess the playing field for what could be a competitive Republican primary. The polling she has seen so far has been encouraging, say Republican operatives familiar with her planning. Her immediate priority is building a network of grassroots and donor support for a contest she estimates could run $10 million — $15 million if Republican Gov. Bill Haslam decides to run.

“If the governor doesn’t get in, I think it’s a relatively clean shot for her,” said Dan Eberhart, a Republican bundler who had breakfast with Blackburn on Tuesday morning in Washington as part of her effort to lock down support for a Senate bid. “I think she’s in a good place, she would be a good consensus conservative for the seat.”

Eberhart worked in politics in Tennessee when Blackburn won her seat in 2002. He agreed to help her raise money for a Senate run and believes she will throw herself into the election next year.

Conservative groups have started to voice support for her as The Washington Examiner previously reported:

The Club for Growth spoke favorably of a possible Blackburn Senate candidacy on Friday. David Bossie, the close confidant of President Trump who runs Citizens United, indicated the same day that he would like to see Blackburn become the consensus conservative candidate in the August 2018 Republican primary.

“We are very encouraged that Congresswoman Blackburn is inching toward getting into the race,” Bossie told the Washington Examiner. “Others are going to have to take a very close look at the race with her in it. I would think there will not be much oxygen for others to get in.”

Blackburn’s score with Club For Growth is at 90%.

The Koch brothers don’t normally get involved in Republican primaries, but they oppose former Rep. Stephen Fincher, who is another possible candidate:

“There have been many quality candidates suggested that are considering running for Bob Corker’s seat. Stephen Fincher is not one of them,” James Davis, executive vice president of the Koch brothers umbrella group, Freedom Partners Chamber of Commerce, said. “Should he try to return to Congress, we will make sure Tennesseans are fully aware of his record.”

Fincher served three terms in the House before retiring in 2016. Davis explained the Kochs’ opposition to Fincher stems from his support for farm subsidies and reauthorizating the Export Import Bank. “Fincher is an exceptionally bad candidate, the definition of cronyism,” Davis said.

Now she just needs to make it official. From CNN:

“Rep. Blackburn appreciates the outpouring of encouragement and support she has received about a possible Senate run,” Blackburn spokeswoman Darcy Anderson said Wednesday in a statement. “She ran for Congress to advance conservative values and fight for the people of Tennessee. Over the next week, she will take a look at the Senate race and decide how, and where, she believes she can best serve her state and her nation.”

I will defer to a local on the ground expert – but she strikes me as the best of the ones with a chance to win. Not perfect – nor as good as a Lee or Cruz – but a step up from Corker.

McConnell will support the Democrat.

McConnell needs to be “encouraged” to retire or be ‘primaryed’.

McConnell isn’t up until 2020, when Trump will be up as well. I expect to see Mitch blackmail Trump into supporting him, but the Alabama special election isn’t good news at all for Mitch on that front.

Marsha would be great. I understand Tennessee’s governor is worse than Corker.

She’s an attractive woman (what hillary clinton might have looked like if she wasn’t fat, didn’t drink herself stupid and had a lot less hate and corruption in whatever poor excuse for a heart.)

Corker’s departure is the tide of the swamp receding.

Then there’s this racist pig:

Not perfect, but I think Blackburn will be quite adequate. Light years better than Corker.

I’m torn between her running for senator … or Speaker of the House. But I suppose she has a better chance of winning with TN voters than with the House GOP. 🙁

I have watched her speak at several functions plus read some of her comments in the WSJ and she is a cut above many of the “Good old boys” in the Senate. Swine like Cornyn and Blunt who are nothing but old time crooks who do the bidding of their lobbying masters. Term limits are the only answer for these crooks.