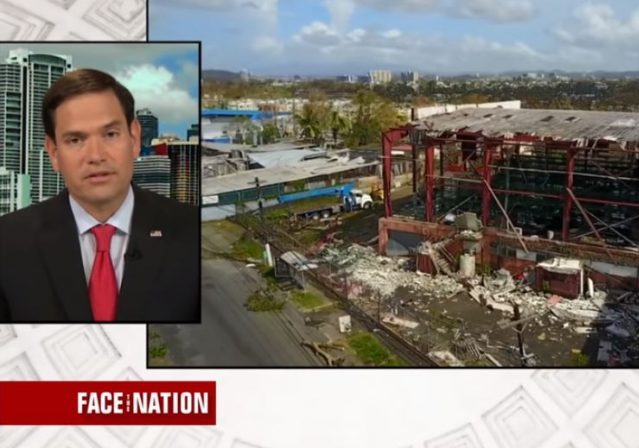 Florida has seen an influx of Puerto Ricans since 2000, and in the wake of Hurricane Maria, many more Puerto Ricans are fleeing their devastated homes and moving to Florida.

It’s not clear how many of these newly-arrived Puerto Ricans will stay, but as many as 100,000 could impact not only the state’s politics but national elections.

The number of Hispanics of Puerto Rican origin living in Florida has surpassed 1 million for the first time, according to a new Pew Research Center analysis of Census Bureau data, more than doubling the state’s Puerto Rican population over the past 14 years.

The analysis of 2014 data, the most recent available, finds that the number of Puerto Ricans in Florida has increased 110% since 2000, when their population was 479,000. This outpaces the state’s total population growth rate (24%), as well as that of Hispanics overall (78%) during this period.

The trend comes as the island’s economic recession has led many residents of the U.S. territory to look for opportunities on the U.S. mainland, and as more Puerto Ricans move to Florida from other states.

With over one million Puerto Ricans in Florida who tend to vote for Democrats, this latest influx could have both short- and long-term political repercussions.  One thing to note is that Puerto Ricans tend to register as Independents, and Florida is a closed primary state.

As U.S. citizens, the evacuees have a legal right to move anywhere in the country. Many are bound for Florida, which is already home to more than a million Puerto Ricans, or nearly a fifth of the 5.4 million living in the 50 states.

. . . . The size of the influx in Florida — and New York, Illinois and Pennsylvania, also home to large numbers of Puerto Ricans — is likely to depend on how fast the recovery is and how well the federal government responds to the disaster.

. . . .  A failure in Puerto Rico could have deep political repercussions for Republicans. Puerto Ricans tend to vote Democrat, at least in recent years, and Florida is one of the nation’s tightest swing states.

President Trump won by about 113,000 votes in Florida. Of the 50 million ballots cast by Floridians in the seven presidential elections since 1992, a difference of 18,000 votes separate Republicans and Democrats, said Steve Schale, a Democratic political strategist in Florida who directed Obama’s Florida campaign in 2008.

“In a state where elections are decided by a point, 100,000 potential new voters that lean Democratic — that’s a lot,” he said.

That consideration has been lost on few as political leaders in Florida has pressed the federal government to do more to repair infrastructure, address health issues, provide housing and restore agriculture on the island.

“While we’ll welcome anyone to central Florida, we’re also conscious of the fact that a mass exodus for the island would hurt long-term prosperity efforts there,” said Rep. Darren Soto, a Democrat who is of Puerto Rican descent and whose congressional district includes Orlando. “We want people who want to stay on the island to be able to do so. We just need to get help to them.”

Last year, a report from the Hispanic Federation predicted that Puerto Ricans would surpass Cubans in Florida by 2020 as the state’s largest group of Hispanics. This could have massive political implications, because Cubans are reliable Republican voters and Puerto Ricans are less predictable — even a “little more progressive,” according to Esteban Garces, Florida state director for Mi Familia Vota, a nonpartisan, nonprofit civic engagement group.

. . . .  Puerto Rican voters in Florida strongly supported Barack Obama in the 2008 and 2012 presidential elections. But they also helped Charlie Crist win the Florida governorship when he ran as a Republican.

“The idea that if Puerto Ricans come here, or Puerto Rico becomes a state, that it will be blue is not accurate,” said Florida state Rep. Rene Plasencia (R), who was elected in a district that leans Democratic. “They’re not aligned with parties.”

In addition to improving conditions in Puerto Rico, Republican lawmakers in Florida would do well to note how Senator Marco Rubio (R-FL) is responding to the devastation in Puerto Rico and to the needs of Puerto Ricans who have evacuated to Florida.

The intense awareness of Puerto Rican affairs in Florida highlights how crucial the populace is in the Sunshine State, which has more than 1 million people with roots on the island — about the same number as New York. Concentrated largely around Orlando, Puerto Ricans increasingly have become a left-leaning counterweight to Republican-performing Cuban-Americans in the Miami area.

But once in Florida, Puerto Rican voters have proven tough to motivate for the Democratic Party, despite being generally more aligned with liberals than conservatives. Many are registered as independent, no party affiliation voters — and not as Democrats — because they “have seen the failure of partisan politics back home, and that’s why the Puerto Rican vote in Florida is so abysmally low,” said Jorge Bonilla, a Central Florida Republican and Puerto Rican activist.

Bonilla acknowledged Democrats could stand to gain more than Republicans after more Puerto Ricans move here, if the Maria response is botched. But he said Republican Sen. Marco Rubio’s understanding of the crisis, and his decision to raise the alarm about conditions in Puerto Rico, have started to endear him to the community at large.

Florida is a large and culturally diverse state, so guessing how an additional 100,000 Puerto Ricans settling in the Sunshine State will impact politics is a guessing game at best.  This also means that there is opportunity here for Republicans.

Interestingly, one of the analyses that rings true to me was written by a Democrat strategist.  Granted, you have to wade through a lot of Democrat cheer-leading to the bottom, but he does step back and make salient points.

Let me close with one note of caution: Florida is a big complicated state, and there is not, nor will there ever be, a single silver bullet that “turns” Florida one way or another. Florida is five or six really big states in one. The North Florida media markets alone are the voting power of Iowa, and just Miami-Dade County has roughly the same voting power as Nevada.

Despite Florida’s razor close margins — with only 18,000 votes separating Republicans and Democrats out of the 50,000,000 ballots cast for President since 1992, and with the last two Presidentials and two Governor’s races each being decided by a point, Florida is historically close because of the sum of these diverse parts, not because of any one thing in any one spot.

While Democrats are busily counting up their shiny new voters in Florida, Republicans have a real opportunity because Puerto Ricans represent a “powerful swing group” rather than another lock-step Democrat voting bloc.

Residents of Puerto Rico and other U.S. territories do not have voting representation in the United States Congress, and are not entitled to electoral votes for President. … Like other territories, Puerto Rico can participate in the presidential primary process.

Residents of Puerto Rico and other U.S. territories do not have voting representation in the United States Congress

But they will … if they take up residence in Florida.

Rubio may be “Endeared” to the Puerto Ricans but he is showing signs that he may be a young RINO. He has just backed the flake, Jeff Flake from AZ, one of the worst Senators in the R column.

Rubio went off the rails some time ago.
He’s about as trustworthy and McCain.

The Ugly Truth About Marco Rubio And His Gang-of-Eight Amnesty Bill
https://townhall.com/columnists/johnhawkins/2015/12/19/the-ugly-truth-about-marco-rubio-and-his-gangofeight-amnesty-bill-n2095418

That would be the same Gang Of Eight that your Great Goad Cheeto supported with his money.

You have to understand something critical. Every Republican Congressman is a card carrying member of the GOPe. There are no exceptions, including Ted Cruz. This might change after the 2018 midterms, we will have to wait and see.

Wrong. Cruz is not and never has been GOPe. Even when he worked for Bush 43, he advised against bigger government. He did not back Bush’s unfunded entitlements, and he has taken a stand against the Patriot Act’s privacy violations.

Hammering this point again and again is not helping your argument. Heck, even Bannon sees Cruz as one, the only one, who is not corrupted by the DC swamp.

It’s really hard for me to take your other comments seriously when you display such a bizarre and unfounded hatred and misrepresentation of Cruz. It’s borderline Cruz Derangement Syndrome.

Winning over Puerto Ricans is a losing battle, kind of like their loser economy. There are too many lazy and dependent ones to outweigh the few anyone might win over.

In the process, you will alienate your base, which detests the behaviors that Puerto Ricans call “culture”

Sorry. Puerto Ricans are solidly Democrat because solidly welfare recipients. If they flood Florida, it will turn solid blue.

The idea that mostly black Puerto Rican’s will flock to the GOP because white Cuban Rubio has a Hispanic last name is terrible Jeb Bush tier cuckservative folly. Especially since the Democrats are courting them with explicitly tribal & racism appeals.

The GOP isn’t going to get their votes unless it changes dramatically in ways that current GOP voters will not like.

Now they appear to think that American taxpayers should foot ramping up support from 50% to 100%.

I don’t mind giving short term aid, a hand up to people who otherwise can pay their own way. Unfortunately, PR has been circling the drain for decades.

It is also interesting that average IQs of Hispanics overall is 87, American blacks average is 85, and Puerto Rico’s average is 83. Their IQ stats have been consistent over a rather long time frame.

Actually, the only real change that 500,000 Puerto Rican immigrants will make to Florida politics is in the Presidential and US Senate races. Most of these people will settle in areas which are already heavily Democrat controlled [large urban area, particularly the Gold coast and the Tampa area]. So, state politics and most Congressional politics will not be affected.

PR is in the fiscal trouble it is in today because they voted for and allowed the liberal party to control it for decades. “Free shit” has been a winning political strategy in PR for a long time.