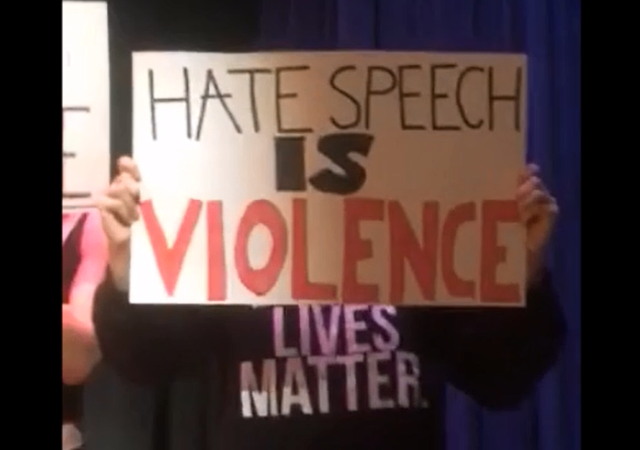 Student supporters of Black Lives Matter at the College of William and Mary shut down a free speech event at the school featuring an ACLU employee who is also an alumna.

The students were apparently upset that the ACLU defended the free speech rights of white nationalists in Charlottesville.

Robby Soave of Reason has the story:

Ironically, Gastañaga had intended to speak on the subject, “Students and the First Amendment.”

The disruption was livestreamed on BLM at W&M’s Facebook page. Students took to the stage just a few moments after Gastañaga began her remarks. At first, she attempted to spin the demonstration as a welcome example of the kind of thing she had come to campus to discuss, commenting “Good, I like this,” as they lined up and raised their signs. “I’m going to talk to you about knowing your rights, and protests and demonstrations, which this illustrates very well. Then I’m going to respond to questions from the moderators, and then questions from the audience.”

It was the last remark she was able to make before protesters drowned her out with cries of, “ACLU, you protect Hitler, too.” They also chanted, “the oppressed are not impressed,” “shame, shame, shame, shame,” (an ode to the Faith Militant’s treatment of Cersei Lannister in Game of Thrones, though why anyone would want to be associated with the religious fanatics in that particular conflict is beyond me), “blood on your hands,” “the revolution will not uphold the Constitution,” and, uh, “liberalism is white supremacy.”

The protest went on for 20 minutes until organizers cancelled the event, according to Soave. He also says guests tried to approach the invited speaker but were prevented from doing so by the protesters.

This video contains some highlights:

Soave provides this official statement from the college which he aptly describes as tepid:

William & Mary has a powerful commitment to the free play of ideas. We have a campus where respectful dialogue, especially in disagreement, is encouraged so that we can listen and learn from views that differ from our own, so that we can freely express our own views, and so that debate can occur. Unfortunately, that type of exchange was unable to take place Wednesday night when an event to discuss a very important matter – the meaning of the First Amendment — could not be held as planned. …

Silencing certain voices in order to advance the cause of others is not acceptable in our community. This stifles debate and prevents those who’ve come to hear a speaker, our students in particular, from asking questions, often hard questions, and from engaging in debate where the strength of ideas, not the power of shouting, is the currency. William & Mary must be a campus that welcomes difficult conversations, honest debate and civil dialogue.

How these students think their actions will endear people to their cause is anyone’s guess.

Heckler’s Veto wins again. Collectively, these actions across the US seem to betray a conspiracy to deprive others of their civil rights and liberties.

notamemberofanyorganizedpolicital in reply to beasler. | October 5, 2017 at 4:43 pm

Oh the Rich Irony of This.

Every damn one of these thugs should have been expelled.

TYPICAL human interaction. The ‘brave’ win, the ‘cowards’ lose. Nothing unusual about that.

The Left always eats its own as it moves ever more left.

Right! There’s really nothing for the conservative ‘right’ to do but to sit back and wait…until they self destruct. Just grab the popcorn and entertain ourselves, eh?

notamemberofanyorganizedpolicital in reply to thalesofmiletus. | October 5, 2017 at 4:46 pm

…and to that Thalesofmiletus, I say:
“Bon Appetite Leftists!”

While it’s fun to see black-on-blue violence and chickens coming home to roost, it would be even more fun to see a posse of free speech advocates deliver a beating to these thugs.

Hey idiot, speech is NOT violence.

Didn’t our AG promise to investigate and prosecute just this type of activity? I hope that happens.

don’t be silly – Sessions has NO balls, and he only strikes out – EVERY TIME AT BAT

‘Liberalism Is White Supremacy’
My God! They have finally figured it out! DNC must be sweating bullets!

notamemberofanyorganizedpolicital in reply to Whitewall. | October 5, 2017 at 4:49 pm

Actually that’s been the fact all along.

Research “real history” (as opposed to the “fake history” in the public school history books) and you discover that racism has always been a salient trait of the “north.” It was in cities such as Boston and New York that racial segregation, and “whites” only first started – way way before the outbreak of the Civil War.

“the oppressed are not impressed.”

Perhaps someone could explain when and where anyone who is truly oppressed has ever had the power to enforce restrictions on the content of public speech?

Until a college administration has the fortitude to arrest demonstrators and follow up with criminal charges and/or suspension/probation/expulsion of the perpetrators nothing will change. I would almost like to see a conservative group shut down a liberal group to see the reaction.

They won’t. Because they are overpaid wienies.

Every single college administration position could be filled with active or retired business people who would volunteer to do it for FREE.

1. Why was the auditorium nearly empty?
2. Were the disruptors enrolled at W&M? If not, were they trespassing and/or denying civil rights? Where is law enforcement?

Dude, we are Pro-Choice.

Better, but only selectively. This is a color supremacist movement, with minority leadership.

If any of these people gave a damn about black lives, they would have taken an hour or two to research all these “police slayings’ and discovered that Martin, Brown, Gray, Scott etc were not murdered.

For them, this is about using the bodies of dead black men as props to promote their Marxism and Black Racism. It’s one of the most dishonorable and disgusting poses I’ve seen in my lifetime.

The university has to cancel the semester, and expel the students demonstrating. They don;t like white supremacy….let them forget about WHITE EDUCATION, AND JOBS FROM WHITE PEOPLE.