“Everyone else seems to think they’re journalists just because they say so.” 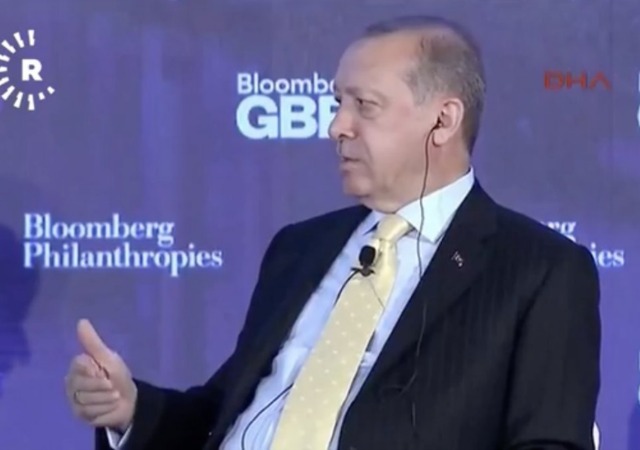 Turkish President Recep Tayyip Erdogan is back in America (Remember the last time he came? His bodyguards attacked people). He spoke at the Bloomberg Global Business Forum where he insisted the journalists Turkish authorities jailed after a failed “coup” are terrorists. From Quartz:

Turkish president Recep Erdogan surreally explained to an audience at the Bloomberg Global Business Forum in New York today why his country has put more journalists in jail than any other nation: They’re not journalists, they’re terrorists, he claimed.

Erdogan’s assertions were a chilling alternative reality to the well-documented persecution of members of the press by his government.

You have been misled, Erdogan told Bloomberg News editor-in-chief John Micklethwait, who interviewed him on stage. “The ones who have been sentenced, who have been imprisoned, are not journalists. Most of them are terrorists. Many have been involved in burglaries and some have been caught red handed as they were trying to empty ATM machines.”

“Everyone else seems to think they’re journalists just because they say so,” he added.

An estimated 150 journalists remain imprisoned in Turkey. According to the Guardian, more than 2,500 journalists have lost their jobs and hundreds have had their press cards revoked following a media purge in which the government closed hundreds of magazines, newspapers, and radio stations. The purge began in the wake of a failed coup attempt mid-summer 2016. Critics of Erdogan say the police in Turkey have since then rounded up not only members of the media, but also academics, and members of the police, lawyers and judges who have spoken out against the leader and his government. Some who have been released have said they were threatened and tortured.

According to Erdogan, however, the journalists who are supposed to be released are indeed getting out of jail, and those who are spies will face a court of law. He called the other imprisoned journalists supporters of the Kurdistan Workers Party (PKK), a rebel group that wants to establish a separate Kurdish state within Turkey, and supporters of Fethullah Gülen, the Turkish cleric who lives in exile in the US and continues to have a large following in Turkey. (Ergodan has accused Gülen of orchestrating the 2016 coup attempt.)

When Micklethwait pointed out that as Erdogan travelled around the US, he would notice that many magazine covers and newspapers feature journalists insulting US president Donald Trump, and they are not imprisoned, Erdogan asked: Do you know the number who are insulting me and my family?

He said that he has “always been very patient” with critics. The journalists who are imprisoned “have nothing to do with my personal self,” he said.

Erdogan in NYC: “most of [those jailed journalists] are terrorists, involved w/bombing attacks, many are involved w/theft, many are spies” pic.twitter.com/0lVl8OdAMK