President Erdogan has begun the purges…. 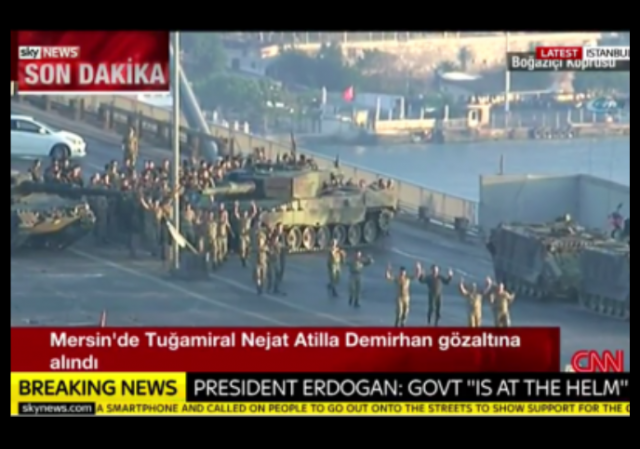 President Recep Tayyip Erdoğan claimed his forces have successfully defeated the coup attempted by some in the military, which left over 250 dead and thousands injured. He promised a swift and quick retaliation for those who retaliated against him. It didn’t take him long:

UPDATE – 11 prosecutors have been arrested in connection to the failed coup attempt https://t.co/0rmMJiXSD0

Authorities arrested General Adem Huduti, commander of the Second Army. He has become the most senior official detained for the coup.

In all, the government has detained 3,000 people.

The attempted coup also foiled America’s operation against the Islamic State in Syria. The government has shut down the airspace, which means the U.S. cannot fly out of the air base at Incirlik:

“We are monitoring the situation in Turkey closely and are taking appropriate steps to ensure the safety and security of our service members, civilians, their families, and our facilities,” said a US defence official. “As of this time, there has been no impact to Incirlik Air Base and counter-[Isis] air operations from Incirlik continue.”

Greece said they will extradite those who sought asylum.

LATEST — 8 traitors who escaped to Greece following failed coup attempt to be extradited as soon as possible: FM https://t.co/rgBzHcDSN7

Erdoğan flew to Istanbul last night where he said the coup “is a blessing from Allah, because it will allow us to purge the military.” Yeah, well, not just the military:

The Turkish Supreme Board of Judges and Prosecutors (HSYK) laid off 2,745 judges and removed five members after an extraordinary meeting on Saturday, which came after a failed coup attempt by the Gülenist Terror Organization (FETÖ), while 10 Court of Appeals members were detained, and detention warrants were issued for 140 others.

Some members of the state council who have connections with the FETÖ terror organization were also detained, according to the Anadolu Agency.

At least 1,563 army personnel, including give generals and 29 colonels were detained across Turkey on Saturday according to the Interior Ministry, after a bloody coup attempt by the FETÖ terror organization, headed by U.S.-based preacher Fethullah Gülen, who is said to have infiltrated Turkey’s state apparatus with thousands of followers in an effort to overthrow the democratically elected government.

Erdoğan insists the Gülen Movement, led by Fethullah Gülen, led the coup despite their condemnation of the military’s actions:

“For more than 40 years, Fethullah Gulen and Hizmet participants have advocated for, and demonstrated their commitment to, peace and democracy. We have consistently denounced military interventions in domestic politics. These are core values of Hizmet participants. We condemn any military intervention in domestic politics of Turkey,” the group said.

“Events on the ground are moving quickly and it would be irresponsible for us to speculate on them. We remain concerned about the safety and security of Turkish citizens and those in Turkey right now. Comments by pro-Erdogan circles about the movement are highly irresponsible.”

Gülen resides in Pennsylvania due to a self-imposed exile in 1999. However, he remained an ally of Erdoğan until 2013 when the courts launched a corruption investigation against the then-prime minister. Erdoğan quickly squashed the investigation, but blamed his old ally “for orchestrating the scandal.”

As daylight broke, more images surfaced from the night:

Photos from the Turkish Parliament after overnight attacks pic.twitter.com/lILH40P2dS @mkosemek

The moment of attack on the Turkish Parliament during a session. Absolutely outrageous. pic.twitter.com/MiR2ljvQ4Z

Turkey, a member of NATO, received support around the world:

Parliament shows unity against the coup, even the parties at odds with the AKP Party:

You have to admit, Erdogan has taken less than 2 years to completely remove most any resistance to keeping it a secular country. That kind of autocratic brilliance has been seen in generations. Even Putin is probably green with envy.

almost like they had the lists prepared in advance

It would be great if someone could explain why Obama wants him to be in power. What does the U.S. have to gain?

Our laws would not allow us to recognize the coup. So we would have had to close all our bases and cease all aid.

These laws probably were result of past abuses such as encouraging coups when we didn’t like the government in a country. You can argue whether those laws are necessary or a good idea. But the bottom line is that we have them.

I still have yet to sort this all out.
The Military that broke off claimed to be fighting in support of the Constitution, Erdogan side claimed to be fighting to preserve Democracy….
I just don’t have enough backgbround on Turkey to really parse through it all and make sense of it.
But, the huge red flag I see is that Obama instantly claimed to support Erdogan, and I have never seen Obama do ANYTHING right.
Based upon that alone, guts tell me a great opportunity was lost.

The same could be said of our ‘christian’ country in we elect T-rump.

Erdogan is a classic demagogue. He is popular with the hoi polloi. They are very, very angry and they wanted to take their country back. They think Turkey should be great again.

You think I am full of BS? Check out who Erdogan’s supports are.

And just who has been sacking military officers and replacing them with his choices over the past 7+ years? Ah… not in Turkey but a little closer to home… like… here … at HOME. One would wonder if someone is trying to convert the USA into the ISA…. United replaced with Islamic.

Freedom and Liberty ain’t for everybody.

The “people power” photos of civvies lying in front of tanks, etc. are almost certainly staged; such theatrics wouldn’t have slowed down a serious coup attempt. Nor, judging from the experience of past coups in Turkey, would another one have been such a disaster that the populace would have any great enthusiasm for resistance.

This all makes me suspect that this was not really an Army coup, but a more half-assed effort by a much smaller group which happens to be in the Army. When Erdogan uses this as cover for a general suppression of the Army, somebody may feel forced to stage another coup—and this time, a more serious one.

“This all makes me suspect that this was not really an Army coup, but a more half-assed effort by a much smaller group which happens to be in the Army”

Or the whole thing is a stage play orchestrated by Erdogan to justify his final takeover. The “coup” is rumored to have been only 500 soldiers, and they never tried to assassinate Erdogan, which you’d think would be necessary for any successful coup.

It is a bit odd that after they take over the airport, they suddenly allow him to land to a crowd of cheering supporters?

None of this passes the smell test.

Well, Erdogan just took the upper hand and cleaned house, so I can’t see there would be enough left for a second attempt.

I agree, the coup looks fake. They Turkish guy tweeting above doesn’t describe what the helicopter was actually firing at… a particular building down the road and not the people in the street.

How could Erdogan fly in at just the right moment when his airplane was supposed to be going to Germany and then London?

Our media are a bunch of imbeciles.

This ‘surprise’ coup has been a topic of conversation for months by Turks in this country. The devolution of Turkey into an Islamic state is now complete.
Turkish politicians are like American ones. They change their rhetoric in order to stay in power. The parallels between what is going on in this country and in Turkey are quite depressing.
It is pretty obvious that Hillary will continue taking us down the same wrong road that Obama has taken. I wish I knew what Trump would do. Unfortunately, I don’t, but faced with a definite wrong versus a crap shoot, I will take the crap shoot and support Trump.

If we extradite the Pennsylvania guy, will we exttradite Hillary for Lybia?

Erdogan is nothing but another muslim purest. He wants sharia law for Turkey and has had a tough go of it so far. This looks like a cheap fake coup so that he can behead all of his opponents without the cry of dictatorship. He has slowly taken away every freedom that goes against his aims. One thing we can count on is that he will publicise the trials and executions of all the failed “Coup” leaders. After that there will be no more free press in Turkey nor will the electronic media survive intact.

Totally agree with your assessment.

However, concerning the remarks you made towards me on the other thread (Trump/Pence logo). 1st, you had no idea what was going on between rags and I. He commented further down the thread in an uncalled for way. 2nd, you posted “humor(?), intellect(?)” and called me a vile thing. All the hallmarks of an intolerant fascist. You had no idea what was going on, yet you stuck your big nose in the middle of it. I suggest you investigate a little more in the future, lest you look like a moron once again. By the way, according to the up/down votes the overwhelming majority of posters agreed with me (like 22-6).

I will moderate my rhetoric in the future, but not because of your condescending schoolmarm remarks. Please don’t think so highly of yourself. carry on.

A total of 8,777 officers from the Turkish Ministry of Interior have been removed from office, the majority being police, and 103 generals and admirals have been arrested. You don’t round up that many people that quickly unless you have a purge list prepared beforehand. That, and the fact they didn’t even try to detain Erdogan or seize the major TV stations, says to me this is definitely a staged coup.