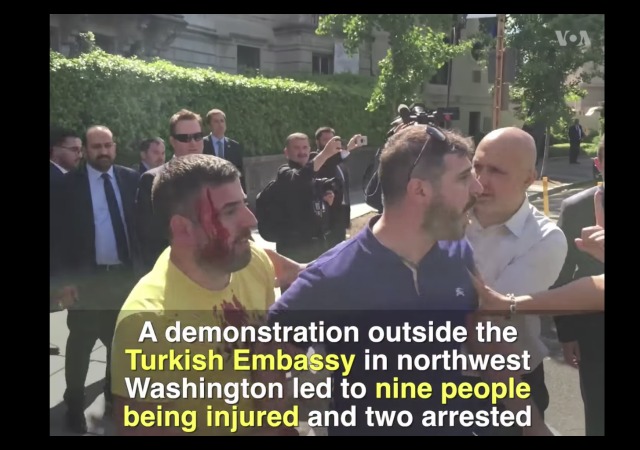 A group of protesters outside of the Turkish Embassy showed support for the groups that Erdogan regularly cracks down on in Turkey. Erdogan’s bodyguards did not appreciate this move and decided to pummel the protesters in broad daylight…on Embassy Row.

Police officials reported that nine people were hurt and two others were arrested. From The Guardian:

Doug Buchanan, a DC Fire and EMS spokesman, said two of those hurt were seriously injured and were taken to hospitals by ambulance. He said by phone that emergency personnel were called to the residence about 4:30pm Tuesday.

According to witnesses, the brawl erupted when the Turkish president’s security detail attacked protesters carrying the flag of the Kurdish PYD party outside the residence.

Erdogan does not hide his feelings for the Kurds. He made it well known he does not appreciate Trump’s idea to arm the Kurds in order to combat ISIS:

“It is absolutely unacceptable to take the YPG-PYD into consideration as partners in the region, and it’s going against a global agreement we reached,” Erdoğan said, referring to the Kurdish Peoples’ Protection Units (YPG) in Syria.

“In the same way, we should never allow those groups who want to change the ethnic or religious structures in the region to use terrorism as a pretext,” he added, suggesting that the Kurds were using the anti-Isis fight as cover for separatist nationalism.

Those at Legal Insurrection before I arrived tried to raise red flags about Erdogan. I raised a ruckus about him over at Breitbart.

So why does America tolerate him? Because Turkey is a member of NATO.

Back in August, Vijeta blogged about former Vice President Joe Biden demanding the Kurds to retreat even though they liberated the Syrian town of Manbij:

Biden’s stance is widely seen as an attempt to pacify Erdogan’s Turkey, alarmed by recent Kurdish gains against ISIS in Syria. Erdogan’s Turkey, after maintaining long tacit alliance with the Islamic State, has recently dispatched military troops into Syria — not to fight ISIS but to hold the line against Kurds. In contrast, Kurds of Syria and Iraq have proven themselves as the most reliable fighting force in war against the Islamic State.

After a failed “coup” in July, Erdogan cracked down on anyone he considered a foe and an ally of Fetullah Gullen, who he feels orchestrated the coup. Turkish officials filled prisons with professors for the rest of 2016. The government shut down 130 media outlets and detained over 47 journalists.

Human rights groups flooded the media with reports of officials raping and torturing the detainees. Those arrested have not been allowed lawyer visits.

In all, this fight on AMERICAN SOIL is nothing compared to what those in Turkey face with a president like Erdogan.

Erdogan’s bodyguards beat up Kurdish protesters in D.C. Just imagine what we are going through back in Turkey. https://t.co/4UhOfS27WJ

“Keep your Enemies close, and your Friend-nemies even closer.”

Why does America tolerate Turkey? Because…politics! Sometimes you gotta tolerate people you think are dicks. And as we all know Sultan Erdogan is a big dick.

the bosperus straits.
its the only real reason they are part of nato.
and at this point in time the straits are not critical.
should revoke them from nato if there is such a procedure.

I watched the first video. Couldn’t tell who was fighting who.

In other words…just like it is in the Middle East.

This is not Turkey.
They should all be given 24 hours to leave the U.S.

No, this is what Erdogan knows will happen because it has happened anywhere that this monster goes. His thugs will be released to him when he leaves and that will be the end of it. They should be locked up and fingerprinted and a profile made of them so that they can never return to the US again. If they are US citizens then they should be prosecuted and jailed.

ISIS was just a subcontractor for the Obama admin.

All apparently true, and they keep proving it!

This is a bit off-subject. (can’t hold it in any longer)

The Seth Rich murder in Washington last summer has been “shoved under the table”, the investigation non-existent.
Now there is the story that the FBI is sitting on some 40 000 e mails that have emanated from Rich’s computer, sent to Wikileaks

Well, there is the perfect alternative source for those e mails. which no amount of collusion can obscure, if Assange is agreeable to release them!

Can we persuade him to do it?

Methinks, an iron-clad assurance from the White House, that all charges the US has against him will be dropped, plus maybe a few Dollars to ramp up his operation, might just do the trick.

Come to think of it, this possibility must have occurred to
the President and his aides?

If so, it wont be long before we’re be sitting back, enjoying the fireworks, watching the Dimmicrat party blowing itself t bits.

I think you have your wires crossed. Assange just offered Comey a job for being fired by Trump. There is no love there by Assange for Trump.

This is not the first time this has happened.

And there have been other instances. Erdogan and his minions are thugs, plain and simple.

The Kurd’s seem to be the only non Israeli bunch over that that doesn’t seem bent on death to America. Or maybe they are and my right wing media outlets omit that. I don’t understand why we aren’t doing more for them given that their enemies always seem to be our enemies.

What if those who were assaulted with a deadly weapon – a shod foot, responded in self-defense with a firearm? After all, it does not appear that the DC Police did much, if anything, to defend the safety and well-being of the demonstrators.

I’m pretty sure if you go to a protest and are assaulted and respond with a deadly weapon…that’s murder. You wouldn’t need to defend yourself if you didn’t voluntarily go to a protest where things were probably going to get out of control. That being said, his bodyguards should be arrested and contained here. They weren’t defending the life of their dictator. They assaulted people holding Kurdish flags.

I’m pretty sure that you are wrong.

“Congress shall make no law respecting an establishment of religion, or prohibiting the free exercise thereof; or abridging the freedom of speech, or of the press; or the right of the people peaceably to assemble, and to petition the government for a redress of grievances.” – First Amendment, U.S. Constitution

I’m pretty sure that peaceably assembling and waving a flag does not waive any of your rights.