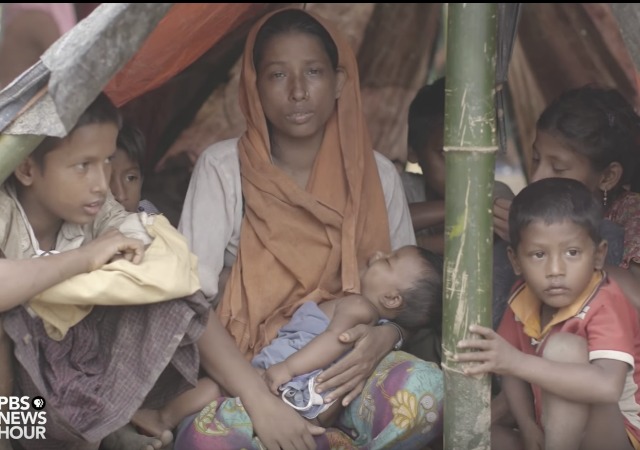 I have been documenting the horrors the Rohingya minority are facing in Myanmar and their cries for help as they face genocide and ethnic cleansing. 421,000 Rohingya have escaped to Bangladesh with next to nothing and aid groups doing as much as they can to help these people.

The U.S. has answered the call. Right before the UN General Assembly kicks off its second day of speeches, the State Department announced the U.S. will send $32 million in aid to help the Rohingya minority.

In an email, the State Department wrote:

The new funding brings U.S. humanitarian assistance to internally displaced persons in Burma and refugees from Burma in the region to nearly $95 million in FY 2017, and it reflects the U.S. commitment to help address the unprecedented magnitude of suffering and urgent humanitarian needs of the Rohingya people. We applaud the Government of Bangladesh’s generosity in responding to this severe humanitarian crisis and appreciate their continued efforts to ensure assistance reaches people in need.

The department also urged other countries to donate and send aid to the Rohingya minority.

As mentioned above, 421,000 Rohingya minority have fled to Bangladesh after the Myanmar army started its “clearance operations” across the villages.

De facto leader Aung San Suu Kyi gave a speech the other day, which I refuted yesterday in a blog, in which she said she had no idea why so many Rohingya have left and insists that most of the Muslims in Rakhine state. The U.S. doesn’t quite believe her. From The Associated Press:

Though Suu Kyi said the “great majority” of Muslims in the conflict zone stayed put and less than half of villages were emptied, the U.S. has been skeptical about that assertion.

“We don’t have the access to evaluate that,” [top U.S. diplomat for refugee and migration issues Simon] Henshaw said. “But 420,000 people moving into Bangladesh suggests the vast majority of Rohingya are affected.”

Suu Kyi said she wants the Rohingya people to return, but Henshaw hopes if they do, the government will do everything it can to protect the people. That may not happen considering the fact the government does not grant the Rohingya citizenship. The Rohingya must receive permission from the government to do anything, even to have more than two kids.

Over time, the overall cost will probably run into many hundreds of millions, said Eric Schwartz, the president of Refugees International.

“I’ve been doing this work for 30 years,” Schwartz said by phone as he flew back from Bangladesh. “This is as bad as anything I’ve ever seen in terms of the human mystery that the Burmese military has created.”

Schwartz said that in addition to food, water and shelter, the refugees will need clothing, security for camps being erected on the Myanmar-Bangladesh border, education for hundreds of thousands of child refugees, and psychosocial support for those who have experienced trauma during the exodus.

spend our money on Americans, or at least people wo like America.

let the Saudis take care of their own.

State Department up to its tricks again, I see.

This may end up as one of the President’s genuine failures (not to be confused with all the imaginary ones)—his lack of urgency in getting Hillary’s old cesspool department under control.