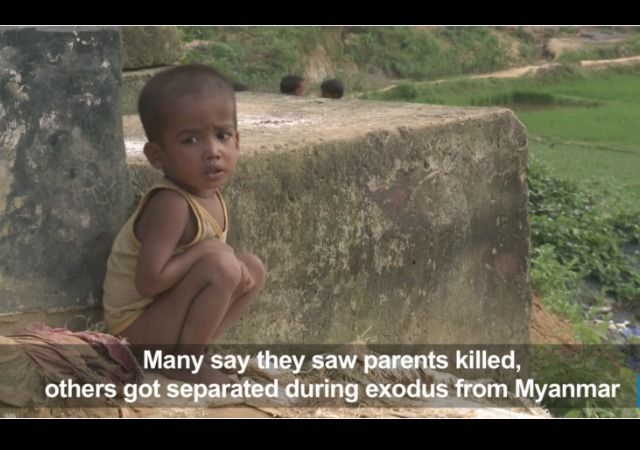 Myanmar government officials have confirmed that the army targeted Rohingya villages in Rakhine state, leaving 40% emptied as of now. From The Guardian:

Of 471 villages targeted in “clearance operations” by the Burmese army since late August, 176 were now empty and at least 34 others partially abandoned, Zaw Htay said.

The violent crackdown, launched in response to attacks by militants, has sent at least 370,000 Rohingya scrambling across the border to Bangladesh and prompted a barrage of criticism of Aung San Suu Kyi, Myanmar’s de facto leader.

The violent crackdown happened after Rohingya attacked security guards when reports emerged “that the military had been deploying an alarming number of troops to the northern part of the state, causing concern among local populations and independent observers.”

For decades, Myanmar, also known as Burma, has oppressed the Muslim minority. The government does not consider them citizens, thus leaving them stateless. In order to do anything they need permission from the government. They even need permission to have more than two kids. In fact, many in Myanmar call the Rohingya “Bengalis” because they believe the people “migrated illegally from Bangladesh” despite calling Myanmar home for generations.

Is it right that the Rohingya attacked the guards? No, but obviously from these statements the officials believe that gives them permission to liquidate this small group of people. From TIME:

Already poised to retaliate, Myanmar military troops, police and other security forces responded to the attacks with savagery; within days, thousands of Rohingya and other civilians began pouring over the border into Bangladesh claiming their villages had been razed and that Myanmar troops were indiscriminately killing people. Many reportedly arrived with serious injuries. Children as young as seven have been treated at clinics for gunshot wounds.

Those who managed to escape have said that the military have raped women, too. Reports have also come out that said Myanmar placed landmines on the border to attack those who flee. One military source within Myanmar said that officials placed those land mines “in the 1990s to prevent trespassing and that the military had since tried to remove them but that none had been planted recently.” From The Washington Post:

Shaheen Abdur Rahman Choudhury, the head of Sadar Hospital in Cox’s Bazar, the biggest town near the border influx, said doctors have seen several patients in recent days with wounds consistent with those from land mines, most of whom had been taken to a larger medical college hospital in Chittagong for treatment.

On Saturday, the human rights group Amnesty International said that land mines have injured at least three civilians, including two children, and reportedly have killed at least one man, calling their introduction into the crisis “another low in what is already a horrific situation in Rakhine State.”

“The first reason is because of the Rakhine terrorist attacks,” he said. “The second reason is there are people inciting riots in some areas … The third is that we are hearing that there will be terrorist attacks and we are trying to address this issue.”

Or it could be the fact that almost everyone in the international community has condemned her silence and non-action as the genocide continues. Ironically, she received a lot of praise last year at the UN general assembly when she pledged “to uphold the rights of minorities.”

Obviously except for the Rohingya.

Aung San Suu Kyi won the hearts of everyone as a political prisoner when she pushed for democratic reforms in Myanmar when the military controlled the country. She won the Nobel Peace prize in 1991 for her efforts. But now her fellow Nobel Peace prize winners have turned against her. From The Guardian:

Five fellow Nobel peace prize winners have added their voices to a chorus of international calls for Aung San Suu Kyi to defend the rights of the Rohingya people. Mairead Maguire, Jody Williams, Shirin Ebadi, Leymah Gbowee and Tawakkol Karman signed a letter asking her: “How many Rohingya have to die; how many Rohingya women will be raped; how many communities will be razed before you raise your voice in defence of those who have no voice?”

On Tuesday, Zeid Ra’ad al-Hussein, the UN’s top human rights official, finally acknowledged the ethnic cleansing that is occurring in Myanmar. From Reuters:

“I call on the government to end its current cruel military operation, with accountability for all violations that have occurred, and to reverse the pattern of severe and widespread discrimination against the Rohingya population,” he added.

“The situation seems a textbook example of ethnic cleansing.”

UN Secretary-General Antonio Guterres spoke about the situation to reporters at the UN. From CNN:

“Grievances that have been left to fester for decades have now escalated beyond Myanmar’s borders, destabilizing the region,” Guterres told reporters at the United Nations. “The humanitarian situation … is catastrophic.”

Guterres said many women and children were arriving in Bangladesh “hungry and malnourished.” Reports of attacks on civilians by Myanmar security forces are “disturbing” and “completely unacceptable,” he said.

“I call on the Myanmar authorities to suspend military action, end the violence, uphold the rule of law and recognize the right of return of all those who had to leave the country,” Guterres said, who also urged countries to provide aid.

Why don’t they go back to Bangladesh?

“She received praise when she pledged ‘to uphold the rights of minorities.'”

Of course she did. She mouthed empty words she had not the slightest intention of following up on, and the stupid rubes at the UN ate it up.

Another great choice by the Nobel committee. I wonder how many people have been killed by Aung San Suu Kyi and other Nobel peace prize winners.

how many people did arafart kill ‘personally’ or killed by inciyement, which continues on a regular basis?

expecting the UN to do anything is a fools errand.

why is it that arabs don’t help out their coreligionists ?

i’m sure uncle sap is expected to do something.

BTW how many countries are sending aid for the hurricane victims ?
https://www.google.com/search?q=how+many+countries+are+sending+aid+for+the+hurricane+victims

I don’t know anything about this, except if muslims are in the minority, their religion ought to be outlawed. They do not believe in living in peace with others.

“For decades, Myanmar, also known as Burma, has oppressed the Muslim minority.”

This is starting to sound just like the MSM. I wouldn’t call it oppression, it’s more like trying to control a scourge. If we go back a few millenia, it’s the Muslim hordes who’ve been systematically oppressing and conquering the Buddhists, but hey don’t let that history get in the way of this virtue signaling.

Muslims practice a few types of conquest: Militaristic, demographic and cultural. Cultural normally comes after both demographic and military conquest. So in the case of Myanmar, they’re practicing a localized demographic conquest. To say that they are the ones being oppressed is just whitewashing their ultimate goal.

Its about time someone, somewhere, started fighting back against genocidal Muslim conquests.

The problem is with the idea that ethnic cleansing is always bad. These Rohingya are Muslim and belong in the Muslim state that’s conveniently right across the river. Burma is a Buddhist country. We should have a few places in the world that are just Buddhist, just as we have places like Pakistan (and de-facto Bangladesh) where you’d better be Muslim.

Racially uniform places have a lot less problems. There are certain racial and ethnic combinations that cause problems. Why is the UN demanding these situations continue rather than being resolved in a permanently peaceful way?

Muslim states and their ‘non aligned’ allies control the general assembly of the UN.

Man, this is an ugly, ugly set of comments. @Crawford: Go back to Bangladesh? Didn’t you read the post? These people have been in Burma for generations. They are Burmese.

@artichoke, @aarradin et all: Does your mistrust of Islam (which I share) justify in your minds the indiscriminate murder of children and the rape of women?

Is the murderous regime in Myanmar any better than, say, North Korea’s?

Let’s have a sense of proportion, people. It’s possible to fight Islamists without becoming like them.

Thank you so much for this comment, Freddy. I appreciate it.

they are muslim first, as will all muslim communities everywhere…Britain, Europe, America …everywhere

I agree with most of what you wrote, but no, they are not Burmese. How does being in Burma for generations make them Burmese? The US constitution says being born in the US automatically makes you a citizen, but most countries do not have such a law and there’s no obvious reason why they should.

” These people have been in Burma for generations. They are Burmese”
Nope. These people owe and observe no obligation to or affiliation with Burma. These people are Muslims first and Muslims last.
“…justify in your minds the indiscriminate murder of children and the rape of women”
Get back to me when you get an answer to this same question from the Muslims.
“Is the murderous regime in Myanmar any better than, say, North Korea’s”
Yes
“It’s possible to fight Islamists without becoming like them”
It is not possible to fight anyone if you are not willing to fight.
Muslims do NOT assimilate. They pollute. Let them have their own geographical boundaries, away from the rest of us.

So you would become them in order to fight them. Thank you for the clarity.

You made a few almost good points.

Don’t blow it by being childish.

I use Burma for the country and Myanmar for the regime’s murderous vision for Burma.

BINGO. You are correct, Sir.

But before I give a shit, are we the global cop or not? Cuz if I am supposed to care about this one, they’ve got to queue up over the other 19 million hellish humanitarian atrocities committed in the past decade or so and we’ll crack skulls in priority order.

and if we are the global cop to go and fix this… we get to start setting the definition of how much retribution is too much.

no. we’re not the global cop? ok then let the concern monkeys in the UN send the usual strongly worded letter and I’ll keep clinging to MY God and MY guns.