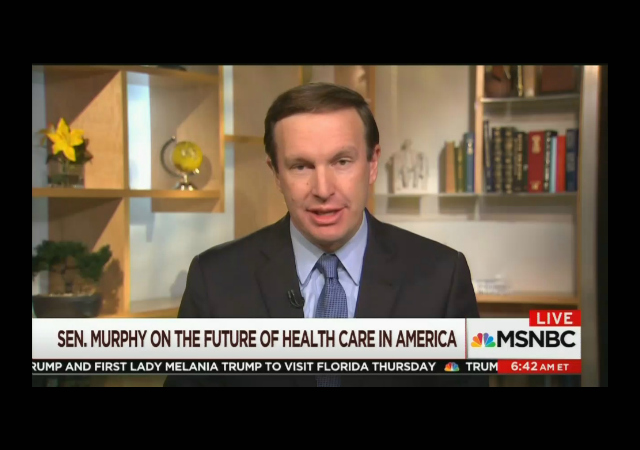 Fifteen senators, including 2020 hopefuls like Elizabeth Warren and Kamala Harris, are co-sponsoring Bernie Sanders’ single-payer health care bill. But even some of those not signing on have plans to eventually convert the country to single payer.

On today’s Morning Joe, Dem Senator Chris Murphy [CT] described his plan, which Politico has called “stealthy single-payer.” Under it, people would be given the option of buying into Medicare or remaining with private insurance. Murphy expressed the belief that:

“Given that choice, consumers would choose Medicare, and it would allow for almost a more natural transitioning to a single-payer system.”

So, in contrast with Sanders’ proposal for radical change, Murphy proposes a more insidious plan, in which Americans would be gradually seduced into giving up control over their health care to the government.

Note: Murphy began by saying that given the chance to design the health care system from scratch, he’d design a single-payer system. His justification is that “it makes absolutely no sense, logically, to tie people’s health insurance to their employer.”

Murphy’s right that tying people’s health care to their employer makes no sense. That came about decades ago when a provision of the tax code was adopted by which the value of health care benefits provided by employers was not treated as taxable income by employees. Thus, it made sense for employers to provide health insurance, rather than increasing employees’ wages to cover the cost of private insurance.

By why is the only solution that Murphy sees to that situation to subject every American to government-controlled health care? Would he also favor single-payer food care, in which everyone had to shop for “free” in government supermarkets? Why not instead greatly decrease government’s role in health care, and let insurers and providers vigorously compete? That’s the situation when it comes to food, and the result is fabulous variety and choice at reasonable prices.

CHRIS MURPHY: So, I’ve always said that if I was to design the American health care system from scratch, I’d design a single-payer system. It makes absolutely no sense, logically, to tie people’s health insurance to their employer.

I think we’re having a really important conversation about how we get there. So Senator Sanders is going to introduce a bill today that I’ll take a hard look at. And I’ve introduced a different concept which is to allow every American to be able to buy into Medicare and essentially allow consumers to decide whether they want private insurance or Medicare.

My belief is that given that choice, consumers would choose Medicare, and it would allow for almost a more natural transitioning to a single-payer system.

There you have it. That’s been the end game since day one.

Sadly the end game most of the original architects and supporters on the Dem side, but ALSO a number of GOPers.

There are plenty of progressive Republicans who use words like “freedom”, “free will”, “get government out of your lives”, simply to get elected. Their actions in DC prove otherwise. And what unites progressives on the left and right is the unquenchable desire to use government to change the culture. What separates the same people is the changes they want from the laws the enact.

“A man’s admiration for absolute government is proportionate to the contempt he feels for those around him.” Alexis de Tocqueville

h/t to Neo-neocon, who has an important piece up today.
http://neoneocon.com/2017/09/12/the-founders-on-property-and-liberty/

Our most fundamental property right is in our own selves.

The only reason this matters to me is there may be just enough GOPers to go along with it to make it happen. At least with Dems you know exactly what they want. There are a number of GOP in the elected class that I see as very sneaky and dishonest. You only need to look at a list of those who primarily leveraged their elections and reelections on “repeal and replace” only to become blockers once they truly had the ability to do it.

I can see many of them telling us (the not properly informed masses) that single payer is ultimately the better fix than redoing the whole plan and allowing some people to suffer in the mean time, or something like that. Their message will be in effect, “It is such a mess this is really the only way out to hurt the fewest Americans…” (while waving the flag).

I’ll be the first to admit that I would love a functional single payer system – then again, I’d also like a pet unicorn. The problem is that I can’t think of any possible way to pay for this, and an attempt to implement it would inevitably end up with a two tier health system with worse treatment for all.

Those who think we can do it love to point to the UK as an example, without noting that the UK paid for it by basically disbanding their military and becoming a bit player in world affairs for the first time in 4 centuries.

This is sad. Pathetic.
America is not going to reward massive failure by giving Dems more power, but they can’t seem to break from their script.
This is why I don’t get worked up about progressive “plans” like Cloward-Piven: they’re retarded.

I have an idea – why not ‘encourage’ congress critters, which include ALL federal employees to only have Medi-Care (taxable as a benefit of course) as their ONLY choice for healthcare.
it would be illegal for them to go out of the system unless they go before a ‘death panel’.

ByeBye John McLaim and the rest of the GOPers.
let that be a test system for 20 years as a trial period.

don’t think that even Bernie the Red would go for it.
and SanFranNan the queen of the House – like the Borg Queen,
may she suffer the same fate.

I just heard about Bernie on the radio news. That’s Independent Bernie. Whatever happened to proud Socialist Bernie?

Oh I see, I’ll get the “option” of buying into Medicare.

Oh wait, almost 80% of Medicare’s almost $540 Billion annual budget is paid by taxpayers. Flucking LIAR, there is no “option.”

It makes absolutely no sense, logically, to tie people’s health insurance to their employer.

But it makes perfect sense, logically, to tie people’s health insurance to their government.

Apparently, the Dems think we American peasants shouldn’t have a choice. We’re lower forms of life than say, the French and the Germans, or even the Australians, who have a choice between private and government health services.

We can’t have options, because we would make the “wrong choice” as they see it.

50 shades of neo-National Socialism. The party responsible for color diversity, operation of abortion chambers, and defense of Planned Parenthood, should not be permitted to form monopolies of capital and control.

…. let em win on this & its another nail in the casket of a democratic republic (to which the demo-ratic party has long given up on trying to preserve, protect and defend, add to that the rhino’s & all one can do is pray… if that is allowed.)

Medicare as it currently exists has three primary components: Part A, Part B and Part D.

Part A covers hospitalization, i.e., just the cost of occupying a hospital bed exclusive of any medical procedure or medication. Only three days of keeping your butt in the bed are paid by MediCare with the patient responsible for the cost for days in excess of three.

Part B covers medical procedures which are anything from a routine doctor’s office visit to major heart or brain surgery. The patient is responsible for 20% co-pay of all Part B costs.

Part D covers prescription drugs. Medicare DOES NOT pay for prescription drugs obtainable through a retail pharmacy (Walgreen’s, etc.). Specialty pharmacy drugs, such as chemo drugs or those used to treat HIV are administered in conjunction wi5h a medical procedure and are paid for under Part B.

There are private insurance plans, called Medigap policies, to cover the Part A hospital bed occupancy beyond three days; the 20% Part B co-pay, and prescription drugs under Part D. The is a Part C Medigap policy which combines Parts A, B and D but administered as an HMO where one is assigned a PCP, can only obtain care from network doctors, and must obtain PCP referral to see specialist. Part A and B Medigap policies allow one to see the doctor of their choice.

Overall, a Medigap policy is very, very inexpensive provided one obtains it at the mandatory age of concurrently with signing up with Medicare. Talk of seniors having to choose between buying their medication or food is disingenuous at best. A Part D policy timely obtained is under $400 annually. With Part D coverage a 30-90 day supply of most retail pharmacy prescriptions is only $1 or $2. Similarly, a timely obtained Part A/Part B policy is under $1200 annually. Social security benefits obtained at full retirement age should be more than adequate to cover these amounts.

This begs the question, if a person cannot afford even these minimal amounts plus those for basic necessities, how have they been paying for food clothing and housing up to mandatory MediCare age. Have they been on public assistance and Medicaid or have they just failed to plan adequately for their own security in old age.

Or, perhaps, they’ve been taxed so much during their working life that they have no nest egg for their golden years.

If the Dems’ wet dream comes true and we are cursed with Single Payer, I hope to God I stay healthy and can live off the grid the rest of my born days. Frankly, I would rather die than let the government dictate my life like that. (And if you’ve ever seen the pictures of the filthy medical facilities in Cuba and Venezuela, or other socialist paradises, you’ll agree with me that your chances are better at home.) But I’m just one of those weirdos who believes in freedom, personal liberty, and all those quaint, old-fashioned concepts.

A natural transitioning to single payer is about as natural as a transition from man to woman, and I mean that in the most offensive, way possible…get microaggressed.