“We need to be the party of the creation of wealth in communities all over the country.” 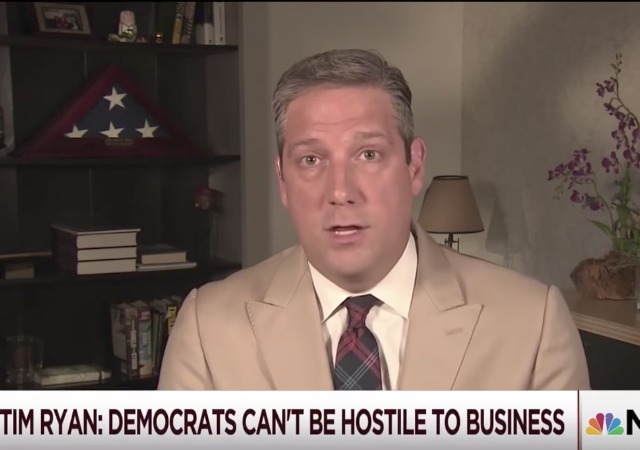 Rising Democrat star Rep. Tim Ryan (OH) told The Hill that he wants to see Congress embrace a “business friendly agenda” before the 2018 elections. Ryan said part of this agenda should include a reduced corporate tax rate.

The lawmaker has held this position for awhile and is not relenting even though his party disagrees with him.

Ryan, a fast-rising Democrat from industrial Ohio, is challenging Democrats to take a different approach to big business and work with corporate America to create jobs.

As we all know, the Democrats took a YUGE hit last November on all levels, not just the presidency. Ryan caused a rumble on Capital Hill about a week after the election when he challenged Minority Leader Nancy Pelosi (D-CA) for her role. He lost, but has not stopped trying to encourage “new blood to lead Democrats ahead of the 2018-midterm elections.”

The party has attempted to make changes to win people back, even offering support to pro-life Democrat candidates. Ryan said the party must embrace a pro-business message:

“If we could figure out the big economic question, which really is how do we get wealth out of the coasts and into the industrial Midwest and start creating real jobs by the hundreds, if not by the thousands, in places like I represent that’s a game changer for me.”

As I said, Ryan has held this view for awhile. He told Morning Joe last week that Congress must lower the corporate tax code and simplify the code:

“Let me be clear,” Ryan said. “I don’t think we can be hostile to business. I think, you know, while we can be for a progressive tax code, we can be for an increase in dividends and corporate – other kinds of business taxes – I think we need to simplify the tax code, I think we need to lower the corporate tax rate. We can’t just be the party of redistribution of wealth, we’ve got to be the party of creation of wealth, and not just in Silicon Valley and Wall Street – In Youngstown, in the South – we have to create new wealth in this economy and I really want the Democrats to be the party that’s going to get their arms around this big issue.”

“Right now, we tax companies like this at 35 percent,” he said at a news conference at an Intel Corp. facility in Oregon. “Our competitors to the north … Canada, they tax their businesses at 15 percent. Ireland, you have a lot of Irish here – 12.5 percent. Technology tax rates on companies, I was just informed this morning, in Israel – 6 percent. China: 25 percent, but they actually give you a break in the early years. We’re between 35 and 45 percent on how we tax American businesses. And so one of the big, great problems we have is we’re basically taxing American businesses out of America. We’re making it really hard for American businesses to compete and succeed in the global economy because of our tax system.”

It’s time for more Democrats to join the effort to pass pro-growth tax reform that will fuel #GrowthForAll pic.twitter.com/eYjEi4OSs6

Ryan appreciated the organization picked up on his remarks, but after its release, he stated that corporate tax is just one part of reform. In other words, that’s where his support ends:

Any debate about tax reform must balance a competitive corporate tax rate with provisions that encourage corporate responsibility through higher taxes on capital gains and dividends as well as increased capital investment in America’s workforce. We should be prioritizing provisions like a $1 trillion expansion of the Earned Income Tax Credit (EITC) to put thousands of dollars back in the pockets of hardworking Americans, child tax credits, and increased standard deductions that poor and working families have been craving for decades.”

In April, after the White House released its tax reform goals, Ryan lashed out at the provisions except the corporate tax code. He did not like that the ideas did not include “closing special interest loopholes, how to pay for any of it, and how much it will increase our national debt.”

Maybe we can negotiate a Ryan exchange.

At this point, Tim Ryan seems like a good trade for that boehner clone paul ryan.

Perhaps Ryan should register as a Republican.

Hee hee, the Dem Party is gonna split between its old guard uber-leftist leadership and its new guard which is 6″ to their right out of pragmatic response to so much losing (and likely to revert to leftyness once/if elected).

Tim Ryan, if he said what he really meant:

“We can’t be hostile to business – today. Tomorrow, is another story. We must fool business into complacency, and we can screw them once they have their backs turned. On the other hand, we’re getting some good payoffs from them that we’re diverting overseas, so our nest eggs are growing, and – Voila! before you know it, you own an Irish ‘cottage’ worth about a million dollars, but whose value you claim on ethics forms is as little as $100,000! – just like Chris Dodd, and we’ll all buy estates in Ireland.”

Corrupt democrat Chris Dodd (of Dodd-Frank infamy, and recently retiring overseas, and for the most part, out of reach of American law):
https://www.redstate.com/diary/BrianFaughnan/2009/03/24/chris-dodds-quaint-irish-cottage/

The GOPe leadership should be tarred and feathered. And then sent to live at Dodd’s house.

And where is AG Sessions on non-profit’ Southern Poverty Law Center squirreling away millions overseas?

TheFineReport.com
“And where is AG Sessions on non-profit’ Southern Poverty Law Center squirreling away millions overseas?”

I read that basically there isn’t any law saying it’s illegal as long as they’re declaring everything.
And that would be the part that would be hardest to prove, that they’re cheating on taxes.

How about an investigation into the shady activities of this nefarious organization, being they, as a nonprofit, are flushing cash overseas.

Fire Mueller and redirect the resources.

Why hasn’t Trump fired that fraud by now?

Well he still sounds like a Democrat…give it with one hand and take it back with the other.

Somebody from antifa should be hospitalizing him soon.

He’ll get the Seth Rich treatment. Can’t have DemocRATs leaving the plantation.

The guy better be careful, he could end up swimming with the fishes!

he stated that corporate tax is just one part of reform.

It’s also just one small part of the tax and regulatory burden which makes it too damn expensive to manufacture things in the US.

Corporate taxes are a high-profile item because they afflict any profitable business, even one which has no manufacturing expenses; shoot, even a business which has no employees. But as soon as you add manufacturing plant and payroll, the really crushing tax expenses are the employee’s personal income taxes, which are all paid by the employer; or, more accurately, by the customer, the ultimate source of all corporate revenue. Rearranging the taxes a bit won’t help; the government’s increasingly voracious appetite for money will gradually strangle the economy which feeds it.

So I’d say there’s no danger that we’re dealing here with a Democrat who’s found religion. He’s just rearranging the deck chairs as the ship floats lower and lower. In other words, business as usual.

“It’s also just one small part of the tax and regulatory burden which makes it too damn expensive to manufacture things in the US.”

Analysis FALSE: The U.S. is manufacturing at an all-time high. Could it be better?: sure.

“But as soon as you add manufacturing plant and payroll, the really crushing tax expenses are the employee’s personal income taxes, which are all paid by the employer; or, more accurately, by the customer, the ultimate source of all corporate revenue.”

Analysis FALSE: Many entrepreneurial enterprises only source revenue from their founders/funders, including stock purchasers. They have no net revenue from “consumers”. The cost of each employee is part of their compensation, which is often borne solely by their employer.

“Rearranging the taxes a bit won’t help; the government’s increasingly voracious appetite for money will gradually strangle the economy which feeds it.”

Analysis TRUE: It’s time to totally eliminate the “corporate income-tax”. But Der Donald has not, and will not, even propose this common-sense approach.

Or copy what Australia does, and give shareholders a credit against the tax paid by the corporation. Which comes in the end to the same thing, but does give the taxman his money off the top rather than making him wait for it.