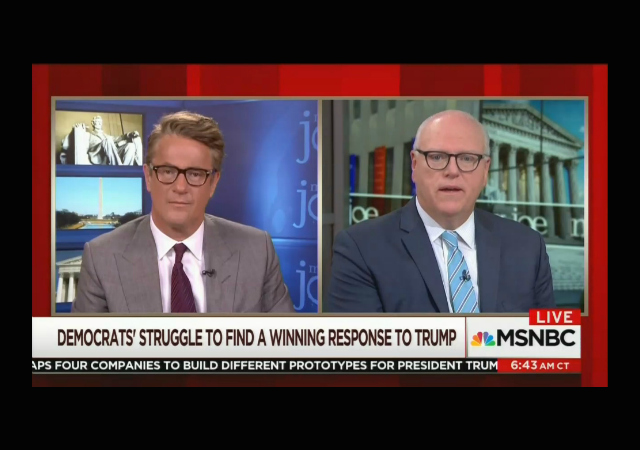 Appearing on today’s Morning Joe, Rep. Joe Crowley, the fourth-ranking member of the Dem House leadership, stated that President Obama is “leading the charge” on efforts in state legislative races.

Crowley was responding to Joe Scarborough’s question as to what Dems will do differently from what they did in November, when they got “absolutely shellacked.”

Crowley began by mentioning the Koch brothers in connection with Dem losses. Scarborough challenged him: “you’re not blaming that on the Koch brothers, are you?” Crowley then switched gears and spoke of Obama’s involvement.

JOE SCARBOROUGH: What are you guys doing differently now that you weren’t doing last November, when you just got absolutely shellacked as a party?

JOE CROWLEY: This has been going on, Joe, prior to that. This goes back to 2010, 2012 when the Koch brothers and Republicans invested in state and local legislative races where they’ve taken over state capitols around the country. I think we have like 15 Democratic governors today. We’ve lost 1,000 —

JOE: But you’re not, you’re not really blaming that on the Koch brothers, are you?

CROWLEY: Well, I’m blaming it on our lack of participation as well, our lack of a plan last decade when it came to reapportionment. I know President Obama is really leading the charge in terms of really focusing on the efforts in state legislative house races, so that we can get back into the game in state legislatures around the country. Focusing on winning gubernatorial races: the silver bullet to really help us in the next reapportionment period, coming up in 2020, 2022.

Note: earlier this month, it was reported that President Obama’s return to politics would be “low key.” “Leading the charge” sounds pretty “high key” to us! No more leading from behind!

notamemberofanyorganizedpolicital in reply to kenoshamarge. | September 1, 2017 at 11:46 am

Obama is the plague that keeps on destroying the Democrats!

Easy. Raise money. There are still thousands of rich gullible.. um… ‘woke’ donors out there who would line up for the privilege of being blessed by him, millions of people who would happily follow his lead about who to hate, and hundreds of media types who have deific stories already written blaming the Republican party for everything from left-wing violence to the failure of democrat-passed Obamacare.

Hmmm, as I read recently, the Left TALKS about doing good and spends a lot of time “virtue signaling” while the rest of the world is DOING good.

Where are the donations from the OBAMAS, the CLINTONS, HARRY REID, NANCY PELOSI, MARK ZUCKERBERG, ERIC SCHMIDT, JEFF BEZOS (who was originally from Houston), SOROS, ETC. for the victims of Hurricane Harvey? Ever notice how THE LEFT only likes to give out other people’s money?

Obama is a horrible politician. Guy is too full of himself to forge alliances with anyone, even in his own party.

I fully support his “leading the charge”, which will continue to drive the (D) party into the ground.

I have some friends who are still dumb enough to do whatever O tells them to do. But suspect they are not members of a huge group, despite what they themselves might think.

This is all a sign of the delusional status which exists within the Democrat Party. As a group, they refuse to admit, even to themselves, that their actions and policies were to blame for their decline in the last decade.

What they refuse to see is that BHO won the elections in 2008 and 2012 for two simple reasons. The first was his race. A large number of moderate independents voted for BHO in both elections. And the second, reason was the nature of the Republican challengers. McCain was a liberal hated by the conservatives, most especially Republican conservatives. He was so bad, that he had to take on a conservative from outside the beltway as his VP. Romney was not much better. Another liberal Republican, he had similar problems to McCain. In both cases, conservatives simply wouldn’t vote for either candidate, though they did vote for Republicans down ticket. So, though BHO was enjoying relatively high margins of vote dominance, it was not translating down ticket. With the Dems losing Legislative seats in 2010, 2012, and 2014.

So, only a serious detachment from reality would lead the Dems to believe that BHO is going to do anything for their legislative races that he could not do for them during his Presidency.

Spot on. And to make matters worse for the Dims, Obama pursued a divisive strategy of racial politics despite his early promise of being someone who could unite the country. In retrospect, what else would a community organizer from Chicago know how to do?

Obama basically “shit in the well” that is American politics. He pulled the scab off our largely-healed racial issues. Nobody except the most hard-core left-wing partisans trust him, and as long as he’s visible and vocal the Dims won’t stand a chance of winning anything significant.

To put it simply, somebody in the Dim party should tell him to sit down and shut the fuck up. But they won’t, that’s what makes them the Dims.

I continue to believe that large-scale organized vote fraud was a third reason.

Even today with irrefutable proof most in this country seem determined to ignore that.

I’m sure you saw the recent report by Judicial Watch showing that there are potentially many millions of fraudulent voters in the US.

The story I saw highlighted their press release that 11 counties in California have more registered voters than population. They listed the percentages, and I bumped those numbers up against 2015 Census population numbers for those counties and found that just those 11 counties have potentially 2.8+million fraudulent voters. That’s assuming that 100% of the population is legitimately registered to vote, which of course is fantastical. So right there, in just those 11 counties, could be enough fraudulent voters to account for Clinton’s popular vote “victory.”

Of course, just because someone is improperly registered to vote does not mean that they will cast an illegal ballot. But the fact that we have many millions of these improperly registered voters out there creates a very fertile environment for vote fraud indeed, especially with the push in recent years towards absentee ballots. To pretend it doesn’t happen, and potentially on a large scale, is bullshit.

Obama has never been anything more than a placeholder. He’s always been too rudderless to lead and too lazy to follow. Others have worked in his name, but you’ll not find Obama’s fingerprints on anything. He’s highly unlikely to start doing any heavy lifting of any kind for anybody now. He’s still nothing more than a figurehead for the party because they can’t find a suitable replacement. Jimmy Carter driving nails is worth more than anything Obama has to offer the party.

I’ll agree with you there; as a politician and statesman Jimmy Carter is a pretty fair jack-leg carpenter.