In March 2017, a rogues gallery of anti-Israel activists, led by Bassem Tamimi, filed suit in federal court in D.C. against Sheldon Adelson and numerous other individuals and groups who support Israel.

The Complaint (pdf.) alleged an extravagant list of charges, including aiding and abetting war crimes and crimes against humanity. 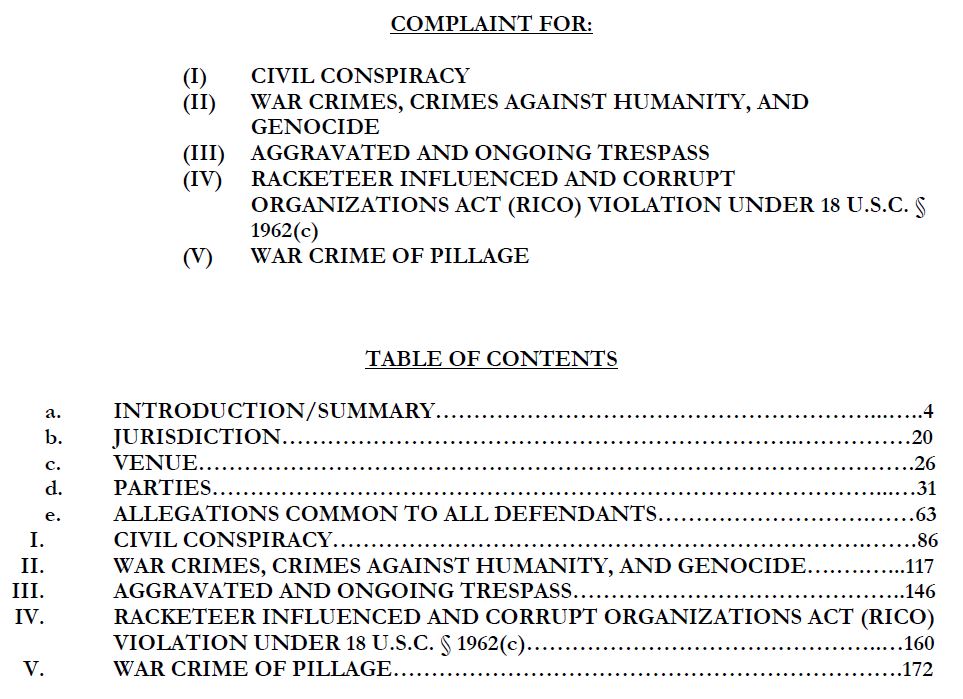 The allegations were contentious and political, as the opening paragraphs demonstrated:

For the past 40 years, every President from Ford to Obama and their State Department spokespersons have all articulated a public policy which: (a) condemned settlement expansion in East Jerusalem (“EJ”) and the Occupied Palestinian Territories (“OPT2”) and the violence that settler theft of private property necessarily entailed; and (b) recognized that both the Hague Convention and the Fourth Geneva Convention (“GCIV/Hague”) principles governed the settlers’ activities. Rotating members of Israel’s High Court of Justice (“HCJ”) for 40 years, senior government officials, a special prosecutor, and a Defense Minister have similarly condemned the settlers’ theft of private Palestinian property, have threatened criminal prosecution over settlement activity, and have also recognized that GCIV/Hague principles govern their activities. Defendants named herein are domiciled in America or Israel and thus knew that: (a) each country’s criminal laws; (b) the UN Charter and international convention principles they adopted—GCIV and Hague; and (c) their respective public policies prohibited theft of private property, arms trafficking, ethnic cleansing, and wholesale violence, including malicious destruction of property.

As explained infra, due to the massive funding provided by U.S. tax-exempt entities and their donors to a number of settlements in the OPT, Defendants herein have been able to carry out a very successful civil conspiracy, the goals of which were the expulsion of all non-Jews from OPT and the creation of new segregated “Jewish-only” cities and villages. These Defendants have: (a)
financed, encouraged, and deliberately collaborated with settlement officials (including security coordinators) in the commission of wholesale violence, knowing that would result in massive ethnic cleansing of the Palestinian population; and (b) after forcibly expelling at least 400,000 Palestinians from the OPT, built for “Jewish-only” settlers some 56,000 new homes and apartments,
187 shopping centers,8 and an extensive highway complex linking up all settlements in the OPT. [footnotes omitted]

The suit was a frivolous attempt to get the U.S. court system to rule on a foreign political dispute, but it was much hyped in the anti-Israel community.

A group of Palestinians and Palestinian Americans are seeking $34.5 billion dollars in damages from wealthy individuals and companies they accuse of financing and profiting from Israel’s settlements in the occupied West Bank and other abuses of their rights.

The plaintiffs include Palestinians who have lost family members in Israeli attacks in the West Bank and Gaza Strip.

Their lawsuit is the latest effort to expose and curb the role of organizations that operate as tax-exempt US charities in fueling violence and settlement expansion on occupied Palestinian land.

Twelve US-based charities and a number of Israeli and US corporations are also named as defendants. The charities include Friends of the Israel Defense Forces, The Hebron Fund and Christian Friends of Israeli Communities.

“We’re not in this for the money, but we’ll probably pick the pockets of some very wealthy corporations,” Martin McMahon, a lawyer for the complainants from the firm Martin McMahon and Associates, told Al Jazeera on Monday.

“It’s about time that the world woke up to the fact that Palestinians are being murdered every day with US taxpayer dollars.”

Attorney McMahon even set up an online template for additional people to join the lawsuit at plaintiffs: 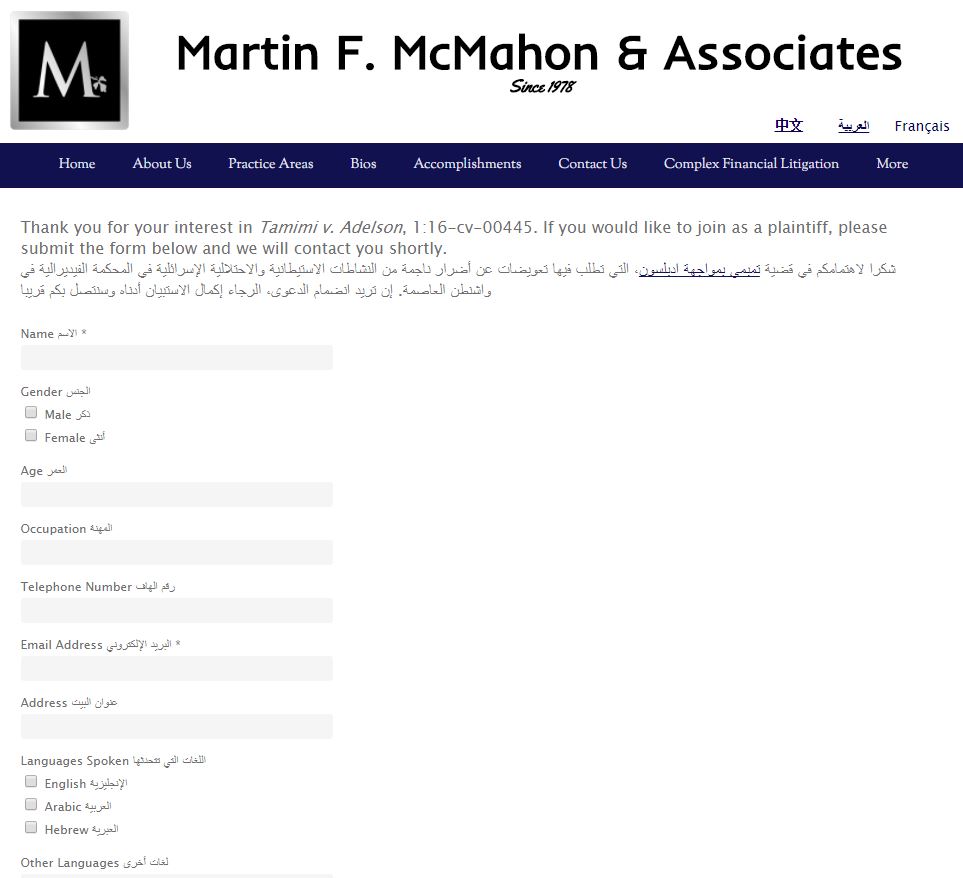 The pro-Israel American Center for Law and Justice correctly noted the frivolous but dangerous nature of this lawfare, Most Significant U.S. Federal Court Case in Defense of Israel’s Legitimacy as a Jewish State:

We have just taken on the most significant U.S. federal court case in defense of Israel’s legitimacy as a Jewish state.

Palestinian activists opposed to the existence of the State of Israel have filed a billion-dollar lawsuit in federal district court in Washington, DC, against numerous organizations that support Israel – including citizen, business, and nonprofit groups – as well as a laundry list of major U.S. companies and individuals who dare to do business in or support Israel….

It’s an absurd and outrageous attempt to use the federal courts to accomplish what Palestinian radicals have been unable to accomplish before – the delegitimization of the State of Israel on a global scale.

We are directly defending one of the numerous Israeli defendants: the Gush Etzion Foundation….

Looks like attorney McMahon is going to have to wait to pick some pockets, because the Court just threw out the lawsuit.

The Opinion (pdf.) is embedded at the end of this post.

Here is the Court’s summary of its ruling:

As more fully explained below, upon careful review of the Amended Complaint and the parties’ filings, the court concludes that it lacks jurisdiction to hear Plaintiffs’ claims against the United States, as Congress has not waived sovereign immunity for such claims. The court further concludes that it lacks subject matter jurisdiction to adjudicate the claims against all Defendants because they are replete with nonjusticiable political questions. Accordingly, the court will GRANT both motions to dismiss and will dismiss Plaintiffs’ claims against all Defendants.

The key finding, which in itself warranted dismissal, was that the case involved political questions which courts cannot rule upon:

All Defendants argue that this court lacks subject matter jurisdiction under the political question doctrine….

If this case were permitted to go forward, resolution of Plaintiffs’ claims for trespass, genocide, and other war crimes would require this Court to determine: (1) the limits of state sovereignty in foreign territories where boundaries have been disputed since at least 1967; (2) the rights of private landowners in those territories; (3) the legality of Israeli settlements in the West Bank, Gaza, and East Jerusalem; and (4) whether the actions of Israeli soldiers and private settlers in the disputed territories constitute enocide and ethnic cleansing. With respect to the Defendants in this case, the court would further have to decide whether contributing funds to or performing services in these settlements is inherently unlawful and tortious, as Plaintiffs allege that settlement expansion is inextricably tied to violence against Palestinians….

In general, issues involving foreign policy are constitutionally committed to the political branches of the federal government, and therefore normally constitute non-justiciable political questions…. However, Plaintiffs ask this court to wade into foreign policy involving one of the most protracted diplomatic disputes in recent memory…. and therefore Plaintiffs’ claims are ultimately non-justiciable….

Where, as here, the court is asked to make a determination on issues at the forefront of global relations while the United States government continues to determine how best to approach these same issues, it should decline to weigh in on such sensitive diplomatic and geopolitical matters….

… Plaintiffs’ claims—against both the United States and the remaining Defendants—raise non-justiciable political questions, which deprive this court of subject matter jurisdiction. Accordingly, the motions to dismiss will be GRANTED.

The court then went through other grounds for dismissal, such as sovereign immunity, and also found those grounds required dismissal as to specific defendants.

The Palestinian and Palestinian-American Plaintiffs in this lawsuit allege that they have experienced immense loss of life, liberty, and property over the last several decades, and they seek justice and compensation for violence they have experienced. At the core of their Amended Complaint, however, is the request for this court to adjudicate and resolve the lawfulness of the development of Israeli settlements in Gaza, the West Bank, and East Jerusalem stretching over thirty years into the past. This issue, both close to the heart of the ongoing Israeli-Palestinian conflict and central to the United States’ foreign policy decision-making in the region, is simply inappropriate for this court to resolve. Instead, these issues must be decided by the political branches. As a result, for the foregoing reasons, this court will GRANT both motions to dismiss.

There is a companion case before a different judge, brought by other anti-Israel activists against Bibi Netanyahu and others, including U.S. Ambassador to Israel David Freedman and the Kushner Family Foundation, with similar allegations in the Complaint (pdf.) McMahon is the attorney in that case, with anti-Israel fanatic Miko Peled as the lead plaintiff. Presumably that lawsuit will be dismissed on the same grounds.

So one frivolous lawsuit is gone, another should be gone soon. But this anti-Israel lawfare illustrates, unintentionally, the fundamental problem in the conflict: The Palestinians portray themselves as pure victims, always seek to blame others, accept no responsibility, and ultimately think outside forces will force Israel into an untenable security situation.

“We’re not in this for the money, but we’ll probably pick the pockets of some very wealthy corporations,”

If ever there was a self-contradictory statement, this is it

Any chance of recovering attorney fees?

Should turn the tables and sue the organizations and individuals who sponsor terrorists. Victims families might have standing. Class action lawsuit against saraourpuss, odeh, etc?

Well, there you go. It should continue until we can replace the rats of the GOPe. Then congress will do some heavy lifting.

if someone/some org sues and the court determines that it was frivolous, why can’t the court award court/defense costs to defense team ?
this would cut down on such suits.

The other thing the court can do is sanction the plaintiff lawyers, and declare the plaintiffs as vexatious litigants to limit their access to the court system.

There are also Rule 11 sanctions.