Money is candy in Washington, D.C. 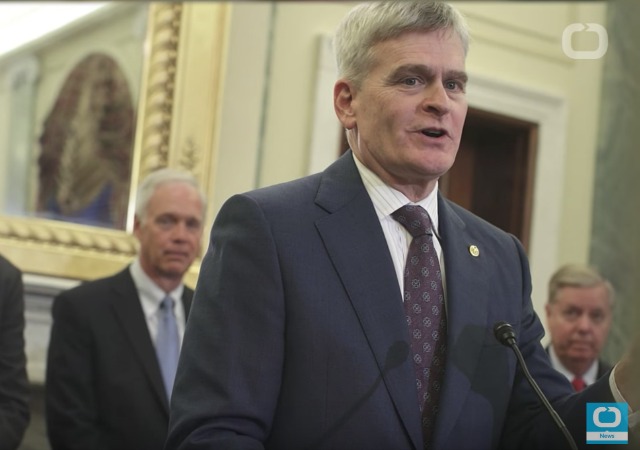 Sens. Billy Cassidy (R-LA) and Lindsey Graham (R-SC) hope to pass their Obamacare “repeal and replace” bill by the end of the month, but have encountered opposition from a few in their own party. Sens. John McCain (AZ) and Rand Paul (KY) have already said no while Sens. Susan Collins (ME) and Lisa Murkowski (AK) remain on the fence. Even Sen. Ted Cruz (R-TX) has said “that he’s not yet on board with the legislation.”

This has led to a few changes to the bill, which includes boosts for Arizona, Alaska, Kentucky, and Maine as a way to entice these senators to vote yes.

The Republicans only hold a majority in the Senate by two seats, which means it can only afford two defections. Paul and McCain have flat out said no. That left the Republicans with a 50-50 vote, but then Cruz also said that as of right now “they don’t have my vote.” He also doesn’t “think they have [Utah Republican Senator] Mike Lee’s either.”

Still, without clear from support from Murkowski and Collins, they made changes. From Axios:

What’s different: According to Graham and Cassidy’s analysis, the revised bill would direct more money to Alaska, Arizona, Kentucky and Maine, compared with earlier versions. But it would still reduce overall federal funding to those states — whose Republican senators are, for now, opposed to the bill or undecided.

The revisions also ramped up some of the regulatory rollbacks needed to help win conservative votes. Sen. Ted Cruz said earlier today that he’s not yet on board with the legislation.

Here are the regulatory changes:

The Hill notes that despite these changes, the Graham-Cassidy bill “is largely the same as the earlier version:”

It still converts ObamaCare’s subsidies and Medicaid expansion dollars into a block grant for states.

It also allows states to waive ObamaCare protections against people with pre-existing conditions getting charged more, an area at the center of controversy around the bill.

None of these senators have commented on this new bill.

Collins appeared on CNN’s “State of the Union” on Sunday morning and told host Jake Tapper that “[I]t’s very difficult for me to envision a scenario where I would end up voting for this bill.” She also said that she’s waiting for the CBO score to come out, which should happen today. Collins expressed concern for protections of those with pre-existing conditions and the costs of premiums and deductibles.

Murkowski’s staff told the media on Friday that the senator is still undecided. Paul has called this bill Obamacare lite. From The Washington Post:

Paul said in a Sunday interview that he broadly opposes a keystone of the Cassidy-Graham plan: turning funding for the ACA into block grants for states.

“The problem I have with block grants is that looks like I’ve affirmatively said I’m okay with 90 percent of Obamacare as long as we reshuffle it and give it to Republican states,” he said. “That’s a horrible message.”

Paul said he is willing to listen to suggestions about how that element of the bill could be constricted. “Would I talk to them if they said they wanted to make the block grants half as much? I might,” he said.

Last Friday, McCain said he could vote for the bill. CNN reported:

“I cannot in good conscience vote for the Graham-Cassidy proposal,” the Arizona Republican said in a statement. “I believe we could do better working together, Republicans and Democrats, and have not yet really tried. Nor could I support it without knowing how much it will cost, how it will effect insurance premiums, and how many people will be helped or hurt by it. Without a full CBO score, which won’t be available by the end of the month, we won’t have reliable answers to any of those questions.”

Cruz made his remarks at the Texas Tribune Festival in Austin, TX. From CNN:

“Right now, they don’t have my vote, and I don’t think they have Mike Lee’s either,” Cruz said, referring to the Utah Republican, at the annual Texas Tribune Festival in Austin, according to the Tribune. “Now I want to be a ‘yes,’ I want to get there because I think Obamacare is a disaster … but the price to getting there, I believe, is focusing on consumer freedom.”

How is this any different than what was done to get ObamaCare to pass? Puuuhhhhllleeese just stop already.

I’m not even sure yet if it is a move in the right direction. But why sweat the details until it becomes a final bill to present to Trump. There may be more buy-offs yet!

notamemberofanyorganizedpolicital in reply to casualobserver. | September 25, 2017 at 1:41 pm

Lindsey-Cassidy-CAIR, Obamacare by another sissy name……..

About 500 people have single-handedly ruined our country.

…he said without the least self-awareness that he was channeling Yogi Bari.

don’t pass this or any other ‘health’ legislation but keep pounding on and on about obamacare –
let the rinos refuse and also rand paul –
the pachyderms don’t know how to lead from the front, their behind or march sideways.

Trump will win running against the ‘do nothing congress’
he only needs tax legislation passed to invigorate the economy.

notamemberofanyorganizedpolicital in reply to Daiwa. | September 25, 2017 at 1:41 pm

Then those congress critters be crack-whores…….

This is all theater. The deals have already been made, and all the insiders already know how it will play out. The question is, at the end of the day, will these jackals be held accountable, or rubber stamped once again?

notamemberofanyorganizedpolicital in reply to Same Same. | September 25, 2017 at 1:42 pm

Speaking of scum destroying the nation – probably few know about this, except the democrat and GOPe scum infesting congress:

How Obama/Jarrett has funded the anti-Trump resistance:

“The Obama administration’s massive shakedown of Big Banks over the mortgage crisis included unprecedented back-door funding for dozens of Democratic activist groups who were not even victims of the crisis.

“At least three liberal nonprofit organizations the Justice Department approved to receive funds from multibillion-dollar mortgage settlements were instrumental in killing the ObamaCare repeal bill and are now lobbying against GOP tax reform, as well as efforts to rein in illegal immigration.

“An estimated $640 million has been diverted into what critics say is an improper, if not unconstitutional, “slush fund” fed from government settlements with JPMorgan Chase and Co., Citigroup Inc. and Bank of America Corp., according to congressional sources.

“The payola is potentially earmarked for third-party interest groups approved by the Justice Department and HUD without requiring any proof of how the funds will be spent. Many of the recipients so far are radical leftist organizations who solicited the settlement cash from the administration even though they were not parties to the lawsuits, records show.”

Legit Question: Would Susan Collins Vote for Her Own Obamacare Replacement Bill?
https://townhall.com/tipsheet/guybenson/2017/09/25/real-question-would-susan-collins-vote-for-her-own-obamacare-replacement-bill-n2385577

Why are they so focused on repeal and replace? They should be focused solely on repeal!

If you want to enact healthcare reform, start with tort reform. Doctors cannot properly focus on medical issues when lawyers are threatening to sue them at every turn.

Oh wait, that’s right, most congress critters ARE lawyers. Gotta look out for their own, the rest of the country be damned!

I miss the days when congress actually attempted to do the right thing for the country.

The Dems keep their promises to their constituents a LOT more than the Repubs do. I just don’t like the promises they make at all. So no wonder the Repubs get voted in and out and in again. People get fed up with one party or the other and there a “change of regime.” But at least the Dems get what they want over time. We repubs vote these jerks in and don’t get JACK. Grrrr.