Stage Name ‘Kid Rock’ May Not Be Allowed on Michigan Ballot

Stage Name ‘Kid Rock’ May Not Be Allowed on Michigan Ballot

The musician may have to use his birth name Robert Ritchie. 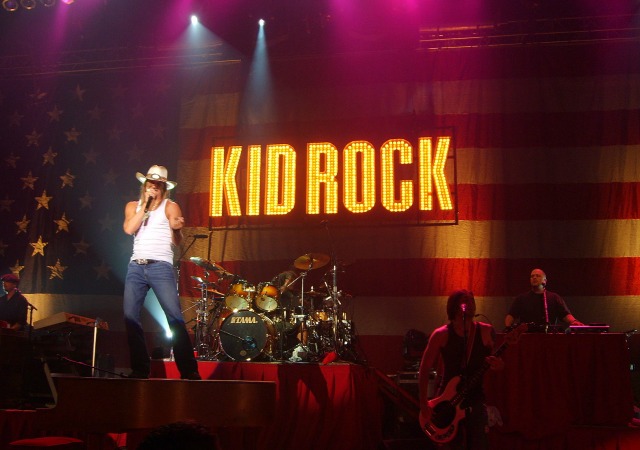 Musician Kid Rock has made waves since he hinted that he may challenge Sen. Debbie Stabenow (D-MI) in November 2018. But Michigan rules may prohibit the name Kid Rock and force him to use his real name Robert Ritchie. Roll Call reported:

If Ritchie were to submit enough valid signatures to make the ballot and indicate that he wanted to be listed as “Kid Rock,” the Michigan Bureau of Elections staff would have to research the question of whether that name would be allowed. At an initial glance, Ritchie’s stage name isn’t an obviously acceptable one under the state’s criteria.

Roll Call pointed out that the Michigan law “Affidavit of Identity and Receipt of Filing” has five stipulations regarding which name a candidate may use on the ballot:

For example, a candidate “may specify that both his or her given name and middle name, or only a middle name, shall appear on the ballot,” or “may specify a name that constitutes a common law name in accordance with the Michigan Department of State Guidelines.” But according to the rules, candidates may not use a “nickname that is not a recognized diminutive of the candidate’s given name.”

Of course, it’s possible that Ritchie may want to appear as a more traditional candidate and opt against using his stage name, but then he would put a serious dent into his name identification advantage and corresponding outsider brand.

He has also tweeted out quotes of his with the slogan Kid Rock 2018.

Roll Call claims that “[I]t’s also premature to assume that because Donald Trump was elected president, any celebrity can win.”

Okay, that is true, but some polls have shown Kid Rock with an edge on Stabenow. Last month, a poll from Delphi Analytics, whose website also launched in July, showed Kid Rock up on Stabenow:

The graphic on the webpage showed the musician listed as Robert “Kid Rock” Ritchie.

In a July 25-27 automated poll by the Trafalgar Group, a Republican-affiliated polling firm, Ritchie led Stabenow 49-46 percent in a hypothetical general election matchup. But the fact that his stage name was included to introduce him to respondents helped boost his standing.

I blogged last month about an article in Politico that showed Kid Rock could legitimately have a chance to beat Stabenow. It’s not just his name, but he actually has a massive presence within his community:

People have laughed him off, but Politico warned on Sunday that it’d be a huge mistake not to take Kid Rock seriously. As I said, Delphi Analytics just launched its website this month, but the findings go along the lines with this article.

Kid Rock hasn’t had much musical success lately and the announcement coincides with new music he’s released. Politico reminds its readers “that theory doesn’t appear consistent with the man himself.” The article continued:

Ritchie, who already boasts a huge and devoted following, has sold tens of millions of albums and amassed what he calls “fuck you money”—enough of it, in fact, that he has given seven-figure sums to charity and capped ticket prices to his concerts at $20 to make them accessible to working-class fans. Meanwhile, he’s earned a reputation in his native southeast Michigan as someone who is earnest when it comes to civic involvement, helping local businesses and headlining major philanthropic events. When Mitt Romney asked for his endorsement ahead of the pivotal Michigan primary in 2012, Ritchie invited him to his Metro Detroit home and peppered him with a list of policy questions, sleeping on the decision before informing Romney the next day he would support him. The two forged an unexpected bond: Romney adopted the patriotic rock anthem “Born Free” as his official campaign song, and Ritchie later praised the former Massachusetts governor as “the most decent motherfucker I’ve ever met in my life.”

Who gets to define “Recognized Nicknames”? And why isn’t a “doing business as” name valid, if it’s the one most readily identifiable?

Though this is not an insurmountable option, because appropriate advertising tying the two identities together can overcome the lack of recognition of his birth name.

If Murkowski overcame mispellings on write in ballots in Alaska, I don’t see much of a problem….. plenty of time for a huge ad campaign just on his name – which would probably be even more effective than endorsement, visions or other types of ads.

Why isn’t it “a common law name in accordance with the Michigan Department of State Guidelines”?

Or he could just file a deed poll and make it official, resolving all problems. People regularly do that in the UK.

Time to head to the probate court and change his name to Robert Kidrock Ritchie.

Seems that this would be an easily-solved problem. He files in probate or family court (what it might be in MI) to change his from Robert Ritchie to Robert Kid Rock Ritchie or Kid Rock Ritchie, and he’s good to go.

This is basically just the filing of paperwork with an appearance before a judge. So long as it’s not being done for the purposes of fraud, it’s pretty much a rubber stamp sort of thing.

“I’d rather entrust the government of the United States to the first 400 people listed in the Boston telephone directory than to the faculty of Harvard University.” – William F. Buckley, Jr.

A philanthropic rocker from Michigan with f**k you money? If Stuart Smalley can steal an election over in Minnesota, sure, why not?

Does he use Kid Rock as a common law name? If so no problem. He would just need proof such as mail, bills, canceled checks.

Change your legal name to Kid Rock Ritchie…put it on all of your promotional materials, solved.

good thing alaska laws not like this for murkowski, iirc there were lot of misspells on writeins.
may be remembering wrong though so don’t take that as fact.

But “Barack Hussein Obama” (or whoever the hell he really is) seems to have been ok.

And what about “Bill” Clinton? And “Jimmy” Carter? Or “Bob” Dole?

If nothing else, the takeaway from this is that any candidate with a bizarre name or a nickname will turn out to be a disaster.

Barack Hussein 0bama is his real name, so why would it be a problem. Jimmy, Bill, and Bob were not on the ballot with those names.

What about Screaming Fauxcahontas?

Mitt is his actual name

He should run under his real name. That would give him a terrific slogan: “A vote for Robert Ritchie is a vote for Kid Rock.”

What about Screaming Fauxcahontas?