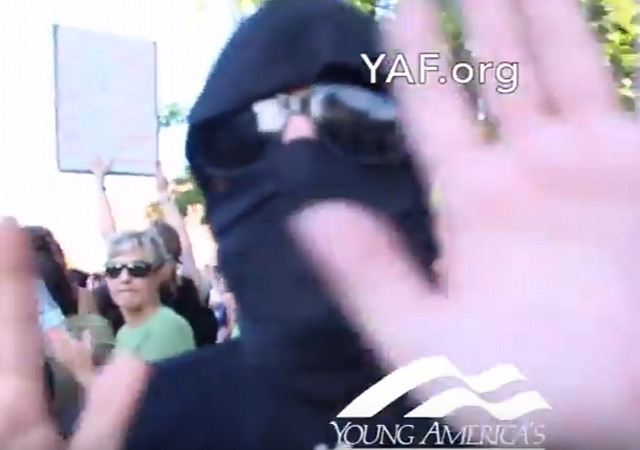 Mike is on vacation, so I’m resuming the higher ed roundup this weekend and next. It’s a beat I used to work for many years when College Insurrection was a separate website, and it’s one I enjoy. Here goes.

How ’bout we punch you in the face, you Nazi.

Your words are violence. My violence is free speech.

We no longer teach history, we eliminate it.

Everything is racist. Everything.

Segregation is not bad when “we” do it.

The response to this has to become a broader acceptance of personal self-defense.

How Bout we punch you in the face needs to be met with “I’m going to break your arm if you do, and then promptly file university assault and police charges for assault, and a civil suit for battery of my person.” Alinsky Rule 4 is in effect: and the process is the punishment to the Antifa goons.

It’s time to make the cost of these assaults so high that only those who are actually mentally ill, and can be locked up for that engage in them.

After that, every Conservative that is attacked should petition the Legislature to come and testify about why they they should immediately be allowed to carry a concealed firearm, because the police OBVIOUSLY couldn’t stop the thugs from assaulting and violating rights, and the State should be responsible because the State has made a promise and taken a positive duty to protect the public that they are now not able to fulfill.

Get four or five small individuals (petite women, preferably photogenic) that are beaten, get good pictures of them bruised or battered, and make them the public face of this movement, and let’s see how fast the Democrat cockroaches run from the press asking them why they’re allowing women to be assaulted.

“Get four or five small individuals (petite women, preferably photogenic) that are beaten, get good pictures of them bruised or battered, and make them the public face of this movement, and let’s see how fast the Democrat cockroaches run from the press asking them why they’re allowing women to be assaulted”

That wouldn’t happen, any more than the press would ask Angela Merkel whether allowing mass Islamic immigration would allow women to be raped. The press would simply stray silent and ignore it.

Oh there will definitely be some monetary cost to it. Perhaps see if the NRA or FreedomWorks or maybe even MercuryOne will purchase some air-time.

Take the testimony of the women, boil it down to a 15-second sound bite, then run a 45 to 60 second commercial during the prime-time news broadcast of MSLSD and CNN, possibly with a end-line of “why isn’t he media covering the failure of the State to protect you?” tag-line (two for one attack).

Then, boil it down further into single testifying women and use it as campaign advertising against the Democrat members of the legislatures.

Don’t forget that wonderful little tool, the civil rights lawsuit – against the goon, his handler and the university that enables him.

Caption for the photo if the masked Antigua desperado:

Caption for the photo of the masked Antifa desperado:

Eventually, people like this goon will be shot dead in the streets by police and the national guard.

No one but his fellow goons and their handlers is going to miss them.

And their parents will probably be happy to get them out of their basements.

It’s likely that the guy who ran over 20 people in Va did it in self defense and look what happened to him.

No, it isn’t likely at all. Nice try.

I’m going to withhold judgment on the initial car approach and crash until I see more facts. I’ve seen video of the event from four different angles, and something is wrong that I can’t put my finger on. There is … something… about it that does not make any sense from the initial end.

The car ~leaving~ the way it did makes PERFECT sense, given the crowd suddenly attacking the car and trying to smash in the windows to get to the driver. The driver ~leaving~ that scene that way was perfectly justified on all sorts of levels. If any of the injured parties were from his ~leaving~ were those attacking the car, he has a valid self-defense claim against THOSE individuals.