Still celebrated only in Rhode Island, though to avoid committing a microaggression it’s called VJ Day.

The only state which still celebrates Victory Over Japan Day is my home State of Rhode Island and Providence Plantations.

Except, we can’t call it Victory Over Japan Day. Because that is a microaggression against Japan, even though they did start the war and we are celebrating victory over Japan.

I’ve covered this holiday numerous times in the past. 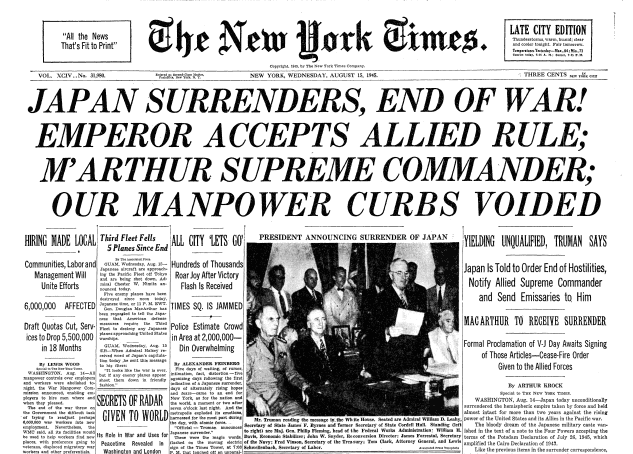 You probably have no idea what I’m talking about.

It will always be Victory Over Japan Day to me.

Although the celebration in the video below did not take place in Rhode Island, it’s a reminder of the original Victory Over Japan Day:

Thanks to Truman’s courage, millions of Americans and Japanese lived.

Jimmy Durante- what a great guy to have sing along with the video. The elation in this country must have been incredible.

The world – and especially CBS reporters getting cracked on the head by Antifa terrorists – should remember the atrocities of Japan during the way, and why we fought:

And let’s not forget that leftist darling Franklin ‘Wag The Dog’ Roosevelt may have known of the attack and got out of the way to rescue his socialist failure in leading the US out of the depression:

“Three days before the Dec. 7, 1941 Japanese attack on Pearl Harbor, President Roosevelt was warned in a memo from naval intelligence that Tokyo’s military and spy network was focused on Hawaii, a new and eerie reminder of FDR’s failure to act on a basket load of tips that war was near:”
https://www.usnews.com/news/blogs/washington-whispers/2011/11/29/declassified-memo-hinted-of-1941-hawaii-attack-

I don’t recall the specific message but Joe Rochefort, the CO of HYPO (the Pearl Harbor based radio intelligence and cryptographic unit that Nimitz credited with breaking the codes that led the the victory at Midway), said that even had he been aware of it he wouldn’t have concluded that Pearl Harbor was a target. Any more than Japanese interest in the Panama Canal or Naval Stations on the west coast were a target.

Almost all naval officers expected the Japanese to strike to the southwest toward resource-rich Indochina and the Dutch East Indies if they launched an offensive war. They didn’t think the Japanese would be stupid enough to drag us into any war.

A significant portion, perhaps even a majority, of Japanese naval officers from ship drivers to Yamamoto thought the same thing. That it would be suicide to take on the US Navy, the Royal Navy, along with the Dutch and Australian fleets simultaneously.

The political situation was extremely dicey in Japan all during the 1930s. Junior officers of the “war faction” assassinated political and other opponents And if you think the US has inter-service rivalries the rivalry between the Japanese army and navy was positively dysfunctional. The navy thought the army was led by a bunch of borderline moronic country bumpkins and the army thought the Navy was full of effete snobs who soaked up too much in resources that should have gone to their war in China. As a matter of fact the reason the Navy minister Mitsumasa Yonai assigned Yamamoto, who often clashed with the “war faction,” to become Commander-in-Chief of the combined fleet was to get him out of Tokyo and aboard his flagship where he’d be guarded by the entire fleet before army hot heads killed him, too.

With the leader of the “war faction” was Gen. Tojo. Since he was the Prime Minister and therefore the had the Emperor’s ear Tojo was taking them all to war even though officers in both the IJN and USN knew it was a stupid idea.

Rochefort et al didn’t know just how suicidally stupid the Japanese could be. They were going to find out.

I’m glad R.I. still celebrates Victory Over Japan Day. My dad was a USCG veteran of WWII and he made a career out of it. He was from Providence. I hope he’s looking down and enjoying the party.

I knew a guy once. He joined the Coast Guard in WW2. He said they didn’t tell him the coast he would be guarding was Japan.

“Three days before the Dec. 7, 1941 Japanese attack on Pearl Harbor, President Roosevelt was warned in a memo from naval intelligence that Tokyo’s military and spy network was focused on Hawaii,

That’s about as useless as the briefing W Bush got on 6-Aug-2001 that said “We recently found out that 3-4 years ago Osama bin Laden decided in principle to carry out some sort of attack, somewhere in the USA. We don’t known what sort of attack, where or when it might happen, or even whether they’re still pursuing this idea, but we suggest increasing security at federal buildings”.

Because that is a microaggression against Japan, even though they did start the war and we are celebrating victory over Japan.

Dec. 7, 1941 was the biggest macroaggression against the US in the 20th century.

I think we deserve the right inflict a few microaggressions in return.

“Thanks to Truman’s courage, millions of Americans and Japanese lived.”

Absolutely true, although back in 1945 (even with the complete ignorance of what Atomic Bombs were) the country would have been 90% plus in favor of it to end the war. They absolutely knew what an invasion would have meant (in terms of KIA telegrams and injured Marines, airmen and soldiers), they had been living that for years.

Had Truman made a different decision, here’s what might have happened:

(Chorus)
They’re singing just for you as you’re sitting in your cell,
Even though you didn’t need the warning.
They’re waiting for the sunrise just to send you to hell,
‘Cause we’re hanging Harry Truman in the morning.

Such a little man! Such a little mind!
The accidental President we happened to find.
Haberdasher heir to Roosevelt’s plan
Turned out to be the dispensable man.
No one elected you Commander-in-Chief.
No one expected you would bring us such grief.
Are you haunted by the faces you betrayed by your hand,
Our American boys lying dead in Japan?

Germany fell, Hitler was dead.
V-E was here, Japan lay ahead.
Now it was time to get the job done,
Dying on the beaches of the Rising Sun.
Nobody knew that you held in your hand
The secret that could end the war in Japan.
You thought that the Bomb was too awful to use,
But how many lives were you willing to lose?

(Bridge)
One chance to bring this war to an end.
One chance to save the lives of millions of men.
You say it was wrong – you say we’d be cursed,
But tell me what we did to Dresden wasn’t worse.

Secrets close held, secrets no more.
Tried by the Senate and thrown out the door.
Rayburn backed down, Berlin fell alone,
And Uncle Joe’s working on a Bomb of his own.
They called it treason and put you on trial.
When the sun comes up, you will walk your last mile.
“To save us from horror,” was the reason you gave.
Now millions are dead, so what life did you save?

Here’s the author’s explanation of the song’s background:

The U.S. won the war in this scenario, some time in 1947. But the invasion of Japan was incredibly costly in terms of both American and Japanese lives, living up to the expectations that millions would be killed.

When the news came out after the Japanese surrender that Truman had held back the American super-weapon, because he felt it was too terrible to use, the public outrage was tremendous. The Democratic Congress (still so — they held control in the mid-term election with the war still on) impeached Truman and convicted him, removing him from office. By then, the order of Presidential succession had been changed, so Sam Rayburn became President. But a weakened America couldn’t deal with the Berlin Blockade, so Berlin fell to the Soviets.

Meanwhile, charges of treason and dereliction of duty were brought against Truman for having kept the Bomb in his back pocket instead of using it. He was tried, convicted, and sentenced to be executed on the first Wednesday in November of 1948.

His pending execution was the subhead to the main — and accurate! — headline in that day’s Chicago Tribune:

Replace the word “Truman” with “Obama,” and the song finally hits home.

“Except, we can’t call it Victory Over Japan Day. Because that is a microaggression against Japan, even though they did start the war and we are celebrating victory over Japan.”

The media is not Obama’s Praetorian Guard.

They are his diaper service.