You probably have no idea what I’m talking about.

The Ocean State is the only one that still observers an official holiday marking Japan’s surrender at the end of World War II. That’s been the case since 1975, when Arkansas dropped the commemoration, which it had already rechristened “World War II Memorial Day” by that point.

There have been attempts to rename the holiday here in Rhode Island, too – Gov. Ed DiPrete tried to transform it into Governor’s Bay Day, and in 1995 there was a bid to start to calling it “Peace and Remembrance Day” – but protests from veterans and traditionalists have always put the kibosh on them.

There’s no question World War II had an enormous impact on Rhode Island. More than 100,000 of the state’s residents served in the war, and 10,000 were killed, injured or lost.

While Victory Day is a state holiday, there are not many commemorations, as reported by The Providence Journal:

Once an occasion for celebration, commemoration, marches, speeches and wreath-laying, Victory Day observances are literally a dying breed.

In recent years, turnouts have diminished. Younger generations have come to view Victory Day as a long weekend holiday in summer rather than the anniversary of the climax of the great catastrophe known as World War II, at the blood-soaked culmination of which the day itself was birthed.

And so it is this year, as the very announcements of gatherings to commemorate the fallen have themselves dwindled to the vanishing point.

Jack Lucas has a succinct theory about all of this: “old age.”

What’s the chance of resurrecting Victory Day nationwide, in an era when victory is a dirty word? 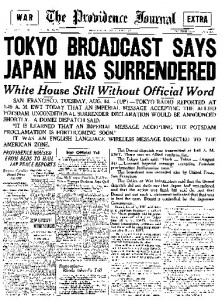 This happened in my wife’s hometown of Fukuoka in southwestern Japan. This was three hours after the emperor’s broadcast of surrender at noon. Aburayama is about a mile from her family’s house. When we visit, I jog there and say a prayer for these men.

Anyone who thinks the atomic bombings were not necessary should read this.

At 3:00 in the afternoon of August 15, 1945, a truck filled with Japanese soldiers and seventeen blindfolded and handcuffed Americans drove out the front gate of Western Army Headquarters in Fukuoka, Japan. Three hours earlier, the Japanese guards had listened to the emperor read a statement ending the Pacific war. The truck arrived at the Aburayama execution grounds at 3:30. The soldiers ordered the American prisoners, all captured pilots or flight crew, out of the truck. Weak from six weeks of poor diet and little exercise, the prisoners quietly obeyed. They were led to a neighboring field bordered with bamboo groves and made to sit in the late afternoon sun. After a brief discussion, the Japanese divided into groups and stationed themselves at four different sites around the field. The first three execution squads were led by Lt. Noboru Hashiyama, an officer attached to the headquarters unit, and lieutenants Teruo Akamine and Ichiro Maeda, both assigned to the Air Defense Section of Western Army Headquarters. Leading the fourth was a probationary officer from the Guerrilla Unit, which was made up of officers receiving guerrilla warfare training at Fukuoka.

One by one, the prisoners were led to the different sites and made to sit with their legs extended out front. At one end of the field, Hashiyama beheaded the first prisoner with two strokes of his sword. Nearby, Akamine also executed a prisoner. Behind a bamboo thicket, the shouts of Maeda’s squad and the probationary officers filled the air as they began executing their eight prisoners. Col. Yoshinao Sato, chief of the Air Defense and Air Intelligence Unit, along with his aide, Lt. Hiroji Nakayama, arrived just as the executions began. Hashiyama asked Sato if he would permit Nakayama, who was known as an expert on bushido, to participate. Sato ordered his aide to instruct the young officers in the correct procedure.

Nakayama explained that “etiquette, according to old customs, demanded that the neck not be completely severed; this was supposed to be insulting to the person being beheaded.” To demonstrate, Nakayama drew his sword and washed it in water from a bucket. Then, moving quickly toward a prisoner, he cut the man’s throat from the side through the neck artery, killing the flyer at once but leaving the neck not entirely severed. Then, before the man fell to the ground, Nakayama swung the sword around and cut the flyer’s neck from the front, still not entirely cleaving the head. According to Nakayama, this was “the true method of execution as I have read in books of old Japanese customs.” Upon Sato’s request, he executed a second prisoner in the same manner.

Meanwhile, Maeda, in the bamboo grove, executed one flyer and presided over the executions of three others. To their right, still in the bamboo, the probationary officers killed the remaining prisoners. According to a second-class private, Yasuo Motomura, one of the flyers at that location was struck with “karate blows around the diaphragm. The prisoner fell down groaning with pain, but immediately tried to run away. At that instant the prisoner was cut down with a sword.” Within minutes, all seventeen American prisoners lay dead upon the ground. All had been killed by sword blows to the neck. Their bodies were covered with grass mats and loaded on the truck for transportation to the crematorium. Word was also passed that all persons who participated in the executions should keep silent, clean their swords, “and see that blood or small pieces of bone had not remained on it… to be sure that no evidence of the execution remained on it.”

There is at least one other celebration of VJ Day this year. On August 14, the town of Seymour, Indiana will hold its 66th annual VJ Day Parade. Despite periodic pressure to be more politically correct, Seymour has maintained the tradition and hosts marching units and home made floats from around the midwest.

I wish “old age” was the answer but I’m afraid it goes much deeper than that.
Our children are being destroyed by not just what they are being taught in school but what they are not and an important day like this and many others have been removed from history books.
As an example, yesterday I commented to my grand-daughter that her kitten looked like Hitler because of the markings on his face….she said “who is Hitler?”
This is no little child…she enters High School next month.

You’re right, Joy. WWII should be dealt with in depth in our schools. Not merely to learn about war … but also the fragility of even highly civilized societies and the lightening speed at which huge conflagrations can erupt.

The warning signs were there for years, but once a certain threshold is reached, it’s pure horror.

One thing I loved about living in Japan was talking to old-timers about the war. One day, when I was getting my bicycle parked besides a train station, the man tending the bicyle parking area asked me in fairly proficient English to sit with him for a cigarette. He told me how he had been an English major at Yokohama University when he was drafted. He became a prisoner of war in the South Pacific and, because of his English-speaking ability, was used as an interpreter by the allies. Fascinating talk, it was.

Sadly, I’ve read, and my wife corroborates, that almost nothing is taught in Japanese schools about the atrocities the Japanese committed. A couple of years ago I read a book in which the author interviewed around 200 former soldiers who’d participated in atrocities in China. The author said that of the 200, only two or three said they felt remorse for what they’d done. Truly depressing.

The youth of Germany are taught nothing about Hitler. They know nothing about “Die Endlösung” and have no idea about what generally happened during the war.

Of course, young Russians are equally ignorant about the Soviet period. Stalin is increasingly revered as a strong nationalist leader.

And I have heard Chinese citizens tell me that Tiananmen square wasn’t a big deal either. Ironically, I heard a non-Chinese lib-tard tell me it wasn’t a big deal because they “only” killed a few thousand people…

This is not unique to Japan…

I celebrate it on my blog September 2.

My dad was one of two veteran pilots sent in with the occupation forces following the surrender and arrived at Yokohama on September 8th, 1945. (The other pilots had accumulated enough battle points to go home.) Top brass said a veteran battle pilot had to lead the three ship B-25 formation that flew around the coast of Japan every day to show force to the Communist Chinese who were taking over China at the time. So my dad (C. M. Williams) and J. Flavin alternated leading the daily B-25 formation. But, (in line with normal military top brass stupidity) they were not allowed to carry ammunition in the B-25 guns!

Evidently the very first US troops who entered Japan immediately after the formal surrender in September WERE NOT ISSUED LIVE AMMUNITION EITHER!!!

The brass at the army base my brother was stationed at in Viet Nam had the rifles in lock up on the first day of the Tet Offensive because an inspection was expected. They wanted the weapons to be sparkly clean for the inspection.

If you’re interested, I just posted a short video of my dad flying the perimeter of Japan in 1945.

[…] good job with his latest video. It ought to play well in early primary states.I’d love it if my state celebrated Victory Day as well.Political arrests and detentions are up 109% in Cuba for 2011 over the same period of time […]