They’ve been operating in Ohio for at least a decade…. 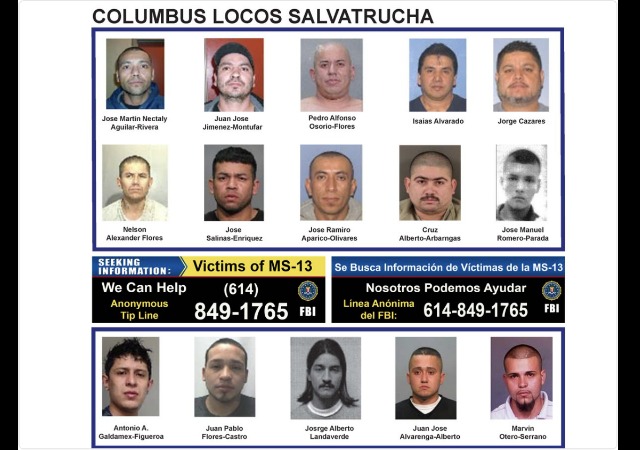 Numerous stories about the dangerous MS-13 gang have come out of Long Island, but the murderous gang has also operated in the Midwest for over 10 years.

Authorities put a dent in the operation when they arrested 13 alleged MS-13 members in Ohio Tuesday.

Federal prosecutors said a grand jury had charged 10 gang members of the “Columbus Clique” with conspiracy to commit extortion and money laundering, as well as the use of firearms during a violent crime, in an indictment returned in late July.

The indictment alleges the 10 “conspired to commit extortion through the use of threatened or actual force, violence or fear to intimidate their victims into paying money to the defendants and their co-conspirators.” Prosecutors said money was then sent “usually by wire transfer and often through intermediaries,” to MS-13 members and associates in El Salvador and elsewhere to promote the group’s criminal activities.

“MS-13 is an incredibly violent gang. That’s its calling card. In fact the motto of the gang is, ‘Kill, rape and control,’” said U.S. Attorney Benjamin Glassman of the Southern District of Ohio. “The enforcement action today is the product of an investigation that has been going on for well over a year, year and a half.”

He said the indictment reaches as far back as 2010, but said the MS-13 Columbus clique could have been in Central Ohio before then.

The leadership for MS-13 sits in El Salvador. Glassman noted that the money laundering portion shows that members of the gang in Columbus work with other members on the east coast to “send proceeds of their extortion back to leadership in El Salvador in order to further promote the activities of MS-13.”

Victims of alleged MS-13 extortion in Cbus are encouraged to call the anonymous hotline 614-849-1765 pic.twitter.com/58wLCJzaCi

California will be along any second to sue trump to release these non-indiginous aboriginal visitors.

Why isn’t hillary clinton in there?

Doing the work of foreign and domestic business and Democratic interests.