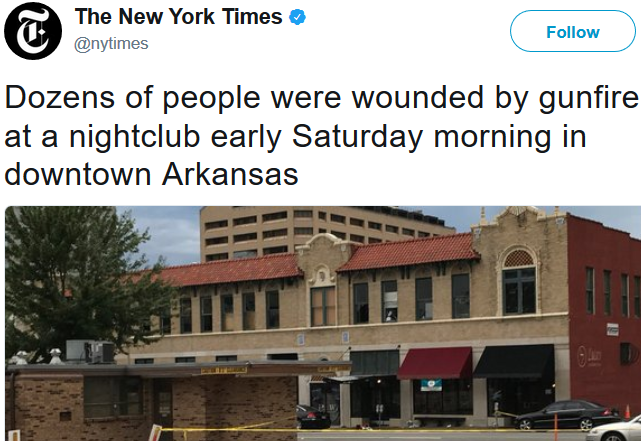 Local officials are saying that 28 people were hurt in a shooting early Saturday after a dispute at a downtown Little Rock nightclub.

The city’s police chief said officers suspect multiple people fired weapons but that the incident was not terror-related.

Little Rock Police said on Twitter that 25 people suffered gunshot wounds and three had unrelated injuries. Police said all were expected to survive.

Clubgoers between the ages of 16 and 35 suffered gunshot wounds, and three others had unrelated injuries. Two people were in critical condition Saturday afternoon, police said.

The shooting occurred around 2:30 a.m. Saturday at the Power Ultra Lounge, a club in a two-story building downtown about 1 mile east of the state Capitol, during a concert by Tennessee rapper Finese 2Tymes, CBS affiliate KTHV-TV reports.

…”We do NOT believe this incident was an active shooter or terror related incident. It appears to have been a dispute at a concert,” the city police posted on its Twitter account overnight. 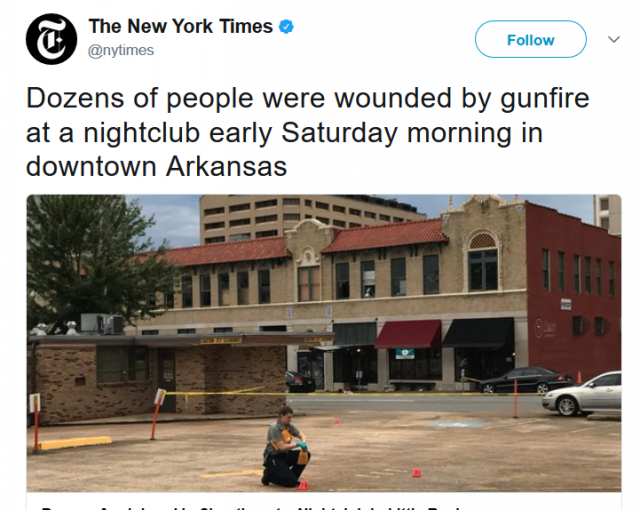 Admittedly, the actual story did report the city correctly. However, the ensuing the geography review and diversity lesson that the haughty publication received is schadenfreudelicious.

Have you ever crossed the Hudson River?

Where, exactly, is downtown Arkansas? Is that close to midtown Texas?

THE VIEW OF THE WORLD FROM PINCH AVE. Time to get out more: NYT reports on shooting in ‘downtown Arkansas.’https://t.co/1RpNLLinKs

All the news that’s fit to print.
Layers and layers of fact-checkers.
The pinnacle of journalism in the United States.
Downtown Arkansas. https://t.co/cVYHTw8w90

I hear downtown Arkansas is beautiful this time of year. https://t.co/vnS0F2HkQm

Many of the comments reference the NYT’s recent firing of copy editors:

Still think they don’t need more editors at The New York Times, and perhaps a few who are not East Coast elites?… https://t.co/nOO5VdchbY

It appears that karma has been spending a lot of time with the establishment media this week.

I was told by a person well acquainted with one of the premier colleges of journalism in the country that journalism students are taught one skill: writing for a deadline. They can get their degree without knowing anything else about any other subject. It does seem like a plausible theory, to me.

True story: Years ago I worked in the IT department at a newspaper. One day I got a call from a reporter who had accidentally deleted a story and wanted me to recover it for him. He screamed at me that it was important because, “I’m on deadline!!”

Later, I mentioned the incident to one of the editors who laughed, saying, “His deadline is Tuesday and he usually misses it.”

I don’t know what they teach at J-school but I don’t think it’s that.

You lost me at “premier” and “college of journalism”

I would think that people as close to the Clintons as the NYT is would know better. Then, again, in the words so someone from there “What difference does it make?!”

Journalists are illiterate about the world, and some cain’t evn wrat gud.

As to the incident itself, meh – just more BoB crime. Thin the herd.

Well I live in the suburbs of “Downtown Arkansas” and this “mass shooting” didn’t get nearly the notice here that it did everywhere else apparently, since it was almost 4 days until I heard about it.

This was a shoot out at a predominantly African American club and was apparently an artistic dispute.

Non-PC Translation: Two rap gangs couldn’t decided who’s “rap” sucked the least and tried to shoot each other up in the middle of a club filled with like minded thugs.

Can a person buy ammunition with food stamps? If not, that needs to change.

These shootouts at “dah club” are so frequent they are’t news.

If this is Downtown Arkansas, I can only imagine what happens Uptown.
What say ye Slimes?

We are a concealed carry state, the thugs usually avoid uptown, lol.

NYT is laying off about 100 copy editors.
Coincidence you say? I think not.

WOW!You really can’t make this stuff up. The remaining dinosaur media will ignore it, therefore, it never happened.

Many of their readers will not understand what was wrong with that headline.

The shooting actually occurred in Troddendown Town, AR. The residents there voted to increase the city’s sales tax a few years ago after Mayor Stodola threatened us with more crime and houses burning down if we didn’t support it. Arkansas *and Troddendown Town) is one of the poorest states and has some of the highest taxes. Keepin’ ’em down in Troddendown Town.

Look, they are used to “New York, New York”. How were they to know that other states don’t have a similar naming pattern for their major cities?

Oh, I get it. Arkansas is such a tiny place that it doesn’t even have a separate downtown. Probably just three gas stations, seven bars, two brothels, a general store, a VFW post, and a gun store. That’s why the story was in error, right? I mean how were we to know?