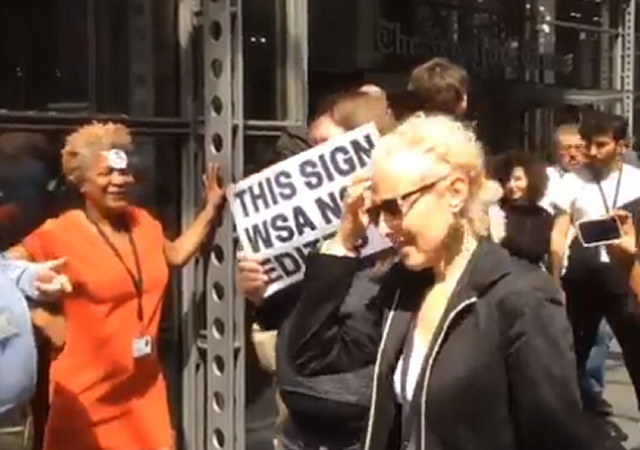 The New York Times is cutting part of its copy editing department. This caused reporters and other staffers to stage a walkout and protest.

There’s something strange about employees of a liberal company like the Times protesting their own employer. It could only get weirder if the New York Times covered the protest, which they did.

With the imminent elimination of a stand-alone copy desk at The New York Times, copy editors and reporters have sent two strongly worded letters to top management voicing their concerns over the changes to the newsroom’s structure.

On Wednesday, copy editors sent an open letter to Dean Baquet, The Times’s executive editor, and Joe Kahn, the managing editor, challenging the decision to cut staff and eradicate the copy desk, which is responsible for, among other things, catching factual and grammatical errors and ensuring that articles adhere to Times style guidelines.

“We have begun the humiliating process of justifying our continued presence at The New York Times,” the letter from the copy desk began.

On Thursday, Times reporters sent their own letter to Mr. Baquet and Mr. Kahn in support of the copy desk. “Editors — and yes, that especially means copy editors — save reporters and The Times every day from countless errors, large and small,” the reporters wrote.

Here’s a video of the protest:

.@nytimes reporters chanting “no editors, no peace” during walkout protest over cuts. pic.twitter.com/2xaNTbbeJ3

Peter Hasson of the Daily Caller has more:

Breitbart News reporter Adam Shaw captured video of NYT editors and reporters chanting and carrying signs as they took part in the walkout Thursday afternoon. “No editors, no peace!” the protesters chanted, appropriating the chant “No justice, no peace” commonly used by Black Lives Matter and other anti-police protesters.

The NYT protesters also carried misspelled signs that read, “This wsa not edited,” suggesting that the NYT will be more frequently plagued by simple typos if the copy editors are let go.

The protest came two days after former Alaska governor and vice presidential candidate Sarah Palin sued the NYT for defamation after the editorial board falsely claimed she incited the 2011 shooting of then-Democratic Rep. Gabby Giffords.

Are they really chanting “no editors, no peace”? Pitiful.

Methinks the NYT is chanting, “No editors – No lawsuits” right back at them.https://t.co/0PyVWVTqdK

How is this not an outrage to serious civil rights activists? I mean, really?? “no editors, no peace” https://t.co/yiAlC6h0Ub

It’s becoming increasingly difficult to distinguish members of the media from college students.

That’s not a good thing.

An editor’s job is to catch typos and inaccuracies. The former can be done by spellcheck and the latter is an impediment to the NYT.

notamemberofanyorganizedpolicital in reply to selfhelpforbastards. | June 30, 2017 at 4:18 pm

SO many things one could say – it’s extremely amusing to watch this garbage rag go down the drain.

It’d be even funnier if Baquet came out and told them he was outsourcing the Copy Desk to Mumbai.

I bet he already has!

No Editors, No Peace? Cut and dry case of cultural appropriation if you ask me.

Well, it is a socialist paper, and socialists know that all you have to do is sing and dance for a while, and the money will magically appear.

That down vote is my big fat finger mistake. Apologies.

It’s always fun when they begin to eat their own.

Given that this is NY, don’t be surprised if Albany passes a statute requiring every resident to maintain a NYT Subscription Insurance Mandate.

Such a provision is probably already in obamacare.

There is nothing funnier than upset morons. Self edited.

notamemberofanyorganizedpolicital in reply to murkyv. | June 30, 2017 at 4:21 pm

Seriously, I’ve not stopped laughing out loud while reading this entire article and comments.

I don’t know how Mike was able to stop laughing long enough to type up this blog post!

RE: “It’s becoming increasingly difficult to distinguish members of the media from college students.”

You mean there’s supposed to be a difference??????

They could have picked a less noisy way to blow off work on a Friday.

How many millions years of evolution and we have THESE people to show for it?