Actual tax legislation won’t come out until this fall. 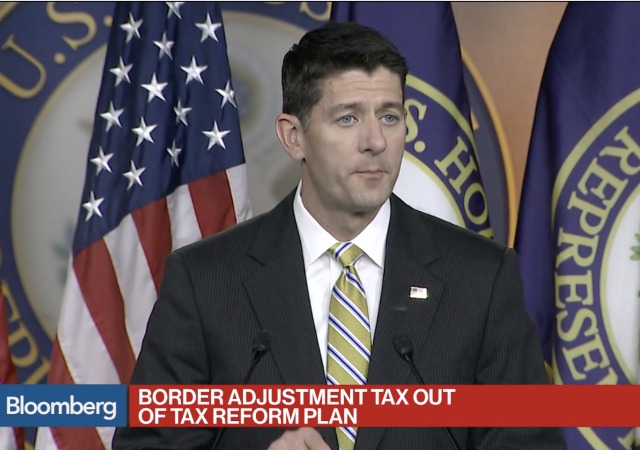 While we have debated the pro-growth benefits of border adjustability, we appreciate that there are many unknowns associated with it and have decided to set this policy aside in order to advance tax reform.

The members all agreed “that the single most important action we can take to grow our economy and help the middle class get ahead is to fix our broken tax code for families, small business, and American job creators competing at home and around the globe.”

Above all, the mission of the committees is to protect American jobs and make taxes simpler, fairer, and lower for hard-working American families. We have always been in agreement that tax relief for American families should be at the heart of our plan. We also believe there should be a lower tax rate for small businesses so they can compete with larger ones, and lower rates for all American businesses so they can compete with foreign ones. The goal is a plan that reduces tax rates as much as possible, allows unprecedented capital expensing, places a priority on permanence, and creates a system that encourages American companies to bring back jobs and profits trapped overseas. And we are now confident that, without transitioning to a new domestic consumption-based tax system, there is a viable approach for ensuring a level playing field between American and foreign companies and workers, while protecting American jobs and the U.S. tax base.

The men also stated that the legislation will “move through the committees this fall, under regular order, followed by consideration on the House and Senate floors.” They continued:

As the committees work toward this end, our hope is that our friends on the other side of the aisle will participate in this effort. The President fully supports these principles and is committed to this approach. American families are counting on us to deliver historic tax reform. And we will.

Honestly, I’m not too disappointed about the lack of details because we now know that the GOP lawmakers will drop the BAT, which Ryan and Brady showed massive love for.

Despite a devotion to the BAT, Ryan had no problem dropping it, according to Politico:

“His top priority is getting meaningful tax reform done,” the aide said. “He had no interest in holding up reform over this one policy, no matter how right he believes it to be.”

Other members of the House Ways and Means Committee members wanted the BAT to die:

“There is not question that this provision was controversial,” said Rep. Carlos Curbelo (R-Fla.), adding that “Kevin Brady is not a my-way-or-the-highway kind of guy.”

Why did they love the BAT? Wall Street Journal explained:

They pursued border adjustment for two reasons: One is that it could have raised $1 trillion to pay for lower tax rates. The second is that by taxing based on the location of consumption, it could have prevented companies from shifting profits abroad. They had been reluctant to back down without a Plan B. Thursday’s statement said, without offering detail, that there is a “viable approach for ensuring a level playing field” without border adjustment.

But businesses have pushed lawmakers to abandon BAT because it would force them to push costs back to consumers:

Brad Anderson, the former CEO of Best Buy, a company that opposes a BAT, released a statement clarifying his position on the tax after the committee packet quoted him saying that “I’m not sure that the full impact [of border adjustability] would get passed along to the consumer.”

Anderson said his once-supportive remarks were made after “having been given inaccurate information” about the tax. He reaffirmed his current opposition: “The BAT is a new tax on everyday items purchased by hardworking consumers which would lead to significant price increases on essential products and job losses for the retail industry, an industry that is responsible for 42 million jobs in the U.S.”

Critics, which also include big retailers like Walmart and Target, have echoed those very concerns. They argue that consumers will ultimately pay for the tax when retailers raise prices to cover their higher tax bill. That, they say, would mean goods from clothing to cars would become more expensive, hurting middle and lower-income Americans.

Overall, though, it was just a statement that told us that they will not include BAT in tax reform and actual legislation will happen later. After weeks of hinting at a tax reform plan, they did not give us any specifics. It didn’t address how they plan to make up for revenue the government would lose if the tax cuts ever pass. I have a solution that just might work:

Usually when people run out of revenue they slash their budget. I know the government won’t do it, but I can dream.

Colleagues expressed disappointment that the statement contained no details:

“This literally started as principles yesterday and morphed into mindless pablum in 24 hours,” said one tax lobbyist, disappointed by the statement’s brevity.

Others hope for another route. From The Financial Times:

Kyle Pomerleau of the Tax Foundation, which publishes research on tax policy, said the loss of hoped-for revenue from border adjustments would force Republicans to scale back their ambitions to slash the 35 per cent corporate tax rate.

“Within the constraints now, you’re looking at a plan that will do much less on the marginal rate side. The corporate tax rate will probably not get to 20 per cent,” he said. “You could probably broaden the corporate tax base in a reasonable way and get the rate down to 30 or 28 per cent.”

Since the statement only mentioned the BAT and no other specific type of tax, Politico mentioned that “other options for taxes on international income tax remain in play, such as a minimum tax favored in the Senate.” Politico reported:

The idea hasn’t proved popular in the past, but Congress is under pressure to address corporations’ motivations to shelter their money overseas rather than bring it back to the U.S.

As part of a switch to a territorial tax system, the minimum tax would affect the profits that U.S. companies book in foreign tax havens. It’s likely to face opposition from the pharmaceutical and technology industries that now enjoy low effective tax rates.

To some analysts and lobbyists, the statement also seemed to sideline the idea of letting all businesses immediately write off all new investments, known as full expensing.

At the same time, though, the vagueness of the statement proves to Congress just how hard it will be for the lawmakers to pass tax reform and a budget:

“That makes the conversation more difficult because we all now — 50 out of 52 of us — have to agree on some number for short-term deficits,” said Sen. Tim Scott of South Carolina, a Finance Committee member.

He and others on the panel see rate reduction as the key to unlocking more economic growth for the U.S. But the joint statement’s lack of rate targets for companies and individuals indicates that the leaders acknowledge that Trump’s 15 percent business tax goal would be too expensive.

The GOP has a small majority in the Senate and procedural constraints, which can hinder their efforts. This is why they want to “pass the tax plan using the special fast-track rules known as reconciliation, which is filled with trap doors and special rules.”

The Wall Street Journal points out the GOP “must adopt a budget first.” But we all know the problems the House Republicans have faced with that!

Republicans will have narrow margins because Democrats are extremely unlikely to provide any votes for a bill that sharply lowers tax rates on high-income households and corporations.

“If Republicans continue this partisan process, they are doomed to repeat the same mistakes they have made trying to upend our health-care system,” said Rep. Richard Neal (D., Mass.) the top Democrat on the Ways and Means Committee.

In the House, Republicans from New York and New Jersey are already balking at the GOP plan to repeal the deduction for state and local taxes. And any three senators could band together to force changes because Republicans have just a 52-48 majority.

“Big complicated tax bills do take a while,” Mr. Kies said. “We’re at the top of the first inning.”

Of course, reconciliation rules can be changed as easily as “Point of Order!” “I appeal the ruling of the chair.” and 50 Senators agreeing to the change.

A simple rule change distinguishing loss of revenue from spending would be sufficient.

The way things are going, we may have to ask ourselves: do we want to live in a world where Amazon, Facebook, Google, Microsoft, and Walmart control Everything?

They already do. What’s the global business value between the 5 of them?

Trillions of dollars in sales between the lot of them. Walmart and Microsoft each alone have a global gross sales larger than the National GDP of most of the countries on the planet.

Really? A down vote? Me thinks someone doth protest too much.

I apparently has not occurred to anyone here that is ANOTHER proposal to manage the economy by “brights” via the tax code.

ELIMINATE the corporate tax entirely. Stop trying to play god with the nation’s economy, while continuing the most disgusting affront to a free people one can image…the U.S. tax code.

Burn it ALLLLLLLL down, root and branch.

But rollback taxes to grow the economy? Whoa! Deficits!

We have a spending and regulation problem. And a Republican Party that 75%+ doesn’t care about either.

We control all 3 houses and get nothing done. Senator McMaverick from Arizona and Senator Squishkowski from Alaska active traitors. (I give Collins credit – She advertises herself as a RINO at least.)

The rest aren’t worth a hill of beans. Infuriating every last one. And they still cower in front of the threat of bad press despite Trump showing that they have a fraction of the power they used to.

Do something for the economy and the voters that out you there.

And by do something I don’t mean the border adjustment tax which just takes more money out of my pocket, which seems to be dead but bad ideas never die in DC – like zombies they rise from the grave again and again.

Now if only the TTP can be revived before the Chinese do a deal with all those countries and we a frozen out.

Oh go AWAY you insufferable TROLL.

TPP was a nightmare waiting to happen. It was poorly defined, and ill conceived in execution. President Trump was largely right about that. Bilateral deals between the countries are much better from a conceptual standpoint.