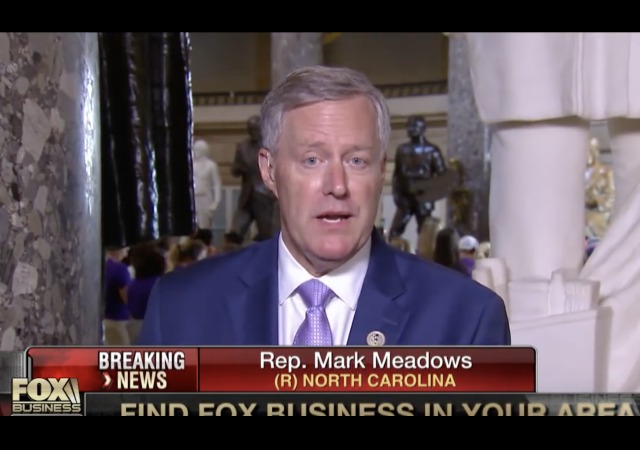 House Freedom Caucus Chairman Mark Meadows (R-NC) and other members have showcased their ambitions:   the caucus wants to add welfare, health care, and tax reform all into one bill and pass it all by the end of the summer.

The Freedom Caucus has told GOP House leaders that the only way they can support higher spending is if the tax reform bill reforms the welfare system. From USA Today:

“Right now a budget cannot pass in the House of Representatives,” Rep. Jim Jordan, R-Ohio, said during a panel discussion at the Heritage Foundation. “What we’re talking about putting forward is this: Maybe we can live with a higher budget number if in fact we do real welfare reform on the tax bill.”

Jordan has introduced a bill that would require 100 hours of work activity a month for able-bodied adults receiving benefits from two major welfare programs, Temporary Assistance for Needy Families and Supplemental Nutrition Assistance Program. Work requirements would be reduced for those with children, but the proposal would also impose limits on how long someone could be in the program.

“The idea is if you’re able-bodied, you can’t be living on the taxpayer, getting help from the taxpayer, forever,” Jordan said in an interview after the panel.

Meadows said welfare reform must happen because the program grows “at a much faster rate than the discretionary spending Congress approves every year.” He also said that Congress has to address the need for labor across the country if they want to meet “the 3 percent growth rate projected in President Donald Trump’s budget.”

In other words, people rely too much on welfare and have no motivation to find work:

Rep. Mark Meadows, R-S.C., said employers in his district have told him they cannot find workers for jobs whose only requirements are that the worker pass a drug test and show up on time.

The White House would like to implement work requirements. From The Daily Caller:

Under current law, adults between 18 and 49 who don’t have children or disabilities have to work 80 hours per month, though some states still grant waivers to these requirements. Trump would like to expand the work requirements to all adults.

The White House Office of Management and Budget estimates that implementing work requirements could save $192 billion over the next decade.

As the White House pushes for health care reform, the Freedom Caucus thinks Congress should concentrate on tax reform since that would help the economy. This is why Meadows wants to put both in the same bill. From The Hill:

House Freedom Caucus Chairman Mark Meadows (R-N.C.) said Friday that Congress should have a “real proposal” on tax reform that lawmakers can start debating by the end of July.

“We believe that time is of the essence,” Meadows said at an event at The Heritage Foundation.

The conservative Freedom Caucus took a formal position earlier this week, calling on the House to work through the August recess to advance GOP priorities such as tax reform.

I’m iffy with anonymous sources, but some have said that Senate Republicans have thought about tackling both issues with one bill. From Fox Business:

Trump’s promise for economic reform, which would bring down the corporate tax rate from 35 percent to 15 percent, and overhauling ObamaCare has been pushed to the sideline, as the ongoing investigation into possible ties between the administration and Russia continues to dominate the news cycle.

In an effort to expedite what has been an uphill battle in passing Trump’s key legislative promises, the talks underway in the House and the Senate aim to get it all done at once – health care and tax cuts all in one bill.

Brilliant.
Another Omnibus, they can just make one vote and call it a session.
I hate to even contemplate what would wind up in it.

Cool! And they can lard it up with so much wishful thinking that it’ll be too big to read, and they’ll have to pass it to find out what’s in it!

Absolutely NOT! Each of those bills individually constitutes an entire chapter or more of the United States Code and each one of them is a disaster of epic proportions. Put the three of them together? No normal human being can read the Health Care bill in less than several weeks to start with!

Republicans gave obama everything he wanted, and more. I’m not seeing what the problem is here.

By bundling three huge issues into a single bill, they hope the opposition is so heavy they can claim, ‘hey, we tried, but…’ which brings them to their actual goal – to do nothing on any of them. Three piles of shit smells worse than one. If a congress member likes all three pieces, of they’ll vote for it, but how likely is that? If said congressman likes 2 of the 3 pieces, he/she’ll have a tough decision to make, and I’m thinking congressmen who like only 1 of 3 won’t vote for it. Congressional Democrats won’t vote for it unless it’s a near-complete capitulation to their positions on the 3 issues.

Fellow conspiracy nuts should look out for a bill that’s ‘Well… Okay’ to GOP voters on two issues, but ‘Oh, HELL No’ on the third – the poison apple meant to spoil the whole bushel so they needn’t do anything, that is, needn’t take any political risks.

Why is it that Democrats will take political casualties year after year to do what is wrong, but Republicans will risk no casualties to do what is right? Maybe that is why Dems advance even if Rs are in charge.

Because staying in office trumps doing the right things. It’s basically, “f**k America, this is about me.”

This sounds wonderful on paper, but which angels will be tasked with determining which of several million people are “able-bodied”?

The Democrats aren’t the only ones who live in a fantasy land.

And yes, I’m well aware that one of the Democrats’ biggest fantasies is that we can continue to spend unlimited amounts to ensure universal welfare.

Great! It can’t fail! Now just figure out a way to actually do it.