Police Funeral: “Where are the demonstrations for this single mom?”

Police Funeral: “Where are the demonstrations for this single mom?” 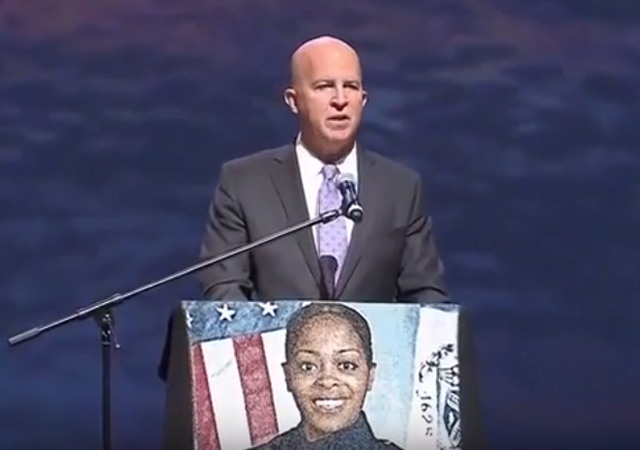 A New York City police officer named Miosotis Familia was murdered last week while sitting in her police car. Familia was black and a mother of three yet there have been no protests over her assassination.

The Comissioner of the NYPD got a standing ovation at her funeral for noting the lack of outrage.

NYPD commissioner at officer’s funeral: ‘Why is there no outrage?’

The commissioner pointed out in his eulogy that Familia is the seventh NYPD officer to be shot and killed in the past five years, according to a transcript published by the New York Post. Familia was shot in the head in the Bronx by a man with a history of criminal activity and mental illness, and police said he was behind an 11-minute rant against police on Facebook Live last year…

The commissioner asked why people in such a politically active city like New York aren’t protesting in the streets against this senseless killing.

“So, where are the demonstrations for this single mom, who cared for her elderly mother and her own three children? There is anger and sorrow, but why is there no outrage? Because Miosotis was wearing a uniform? Because it was her job?” he asked. “I simply DO NOT accept that.”

NYPD Police Commissioner is applauded at slain cop's funeral: “Where are the demonstrations for this single mom…why is there no outrage?” pic.twitter.com/11fTjy38Du

Many of the same officers who applauded the message from James O’Neill displayed their anger at Mayor de Blasio for skipping town after Familia’s death by turning their backs on him.

Shawn Cohen and Max Jaeger of the New York Post:

The disgusted Finest were assembled outside the World Changers Church in The Bronx on Tuesday as part of the overflow crowd of mourners for assassinated Officer Miosotis Familia.

They showed the building their backs as speakers broadcast de Blasio’s eulogy for Familia from inside.

The protest came after de Blasio skipped town to participate in protests at the G-20 summit in Germany last week — the day after Familia was killed by cop-hating gunman Alexander Bonds.

And as he prepared for the trip, the mayor missed a swearing-in ceremony for new police recruits, an event that was especially poignant in light of Familia’s murder.

“Mr. Mayor, you didn’t have to travel to Germany for a protest — all you had to do is speak in front of the men and women of the NYPD,’’ Mullins said.

DeBlasio, absent demonstrators? They have one thing in common…they are Red. Liberal. Trash.

“Where are the demonstrations for this single mom?”

Silly question, Commissioner. By now everyone knows that only *certain* black lives matter to BLM. In particular, black lives that are easily exploited to inflame hatred towards police, private enterprise, Republicans, people of pallor, or any combination of the above.

Sadly to many in the BLM the late officer Familia was probably viewed as a “traitor” for being a member of the vile, murderous police force…

Her Black Life doesn’t Matter because she was a PO-lice.

BLM is part of the racial grievance industry. It cares nothing about the lives of any Black Americans except the leaders and other important members of that movement. The only “color” which is important to these people is green. Money drives this. And, there is no money to be made from the death of Ofc. Familia.

People try to paint BLM as a social justice activist movement with an ideological basis. While there are associates who operate on an ideological basis, that is not the purpose of BLM. It is simply a moneymaking venture. It is designed to produce wealth for its leadership and other members, most notably its attorney associates, at the expense of the public. Follow the money. Once you realize that it is in existence to make money off the deaths, often justified, of criminals, its actions, or inactions, all make sense.

Time to cut their “Greens” off.

No money for you suckas!

One person in their entire organization felt bad about the optics of this, so they wrote one email at 2 am and then forgot all about it.

Where was the public outrage? Admit it; the vast majority of BLM activists cheer every time a cop dies. For any reason.

So, BLM doesn’t understand self defense. Otherwise, they would not condemn George Zimmerman or the police office who shot Michael Brown, for a couple of examples.

“Outside self-defense”?! The entire movement was built to protest a clear case of self-defense.

The problem with Commissioner O’Neill is that he only believes in enforcing the laws he likes. Immigration laws of his country? Not so much.

It is not his job to enforce federal law. That’s the feds’ job, and nobody, anywhere in the country, prevents them from doing it. But they are not entitled to commandeer the aid of state and local governments that don’t wish to help them.

Mac45: The oath of office for a sworn LEO almost universally includes the phrase, “to uphold the laws of {insert state] and the United States of America”.

[class] diversity is literally a many Pro-Choice, selective, unprincipled, and opportunistic thing. All lives matter.