The elusive Palestinian “Day of Peace” has yet to be seen 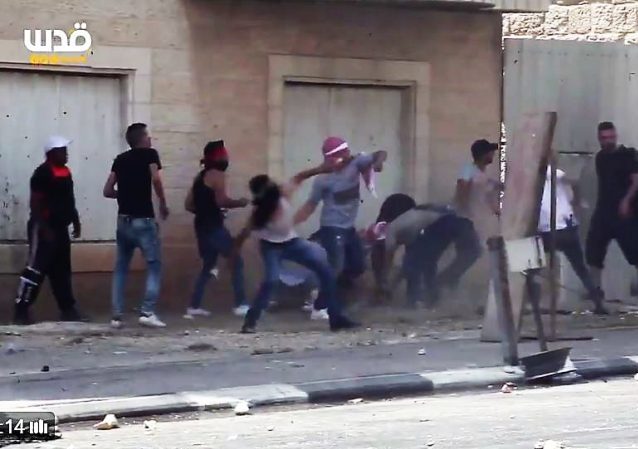 We reported a week ago about an Arab terrorist attack at the Temple Mount in Jerusalem. It started with weapons hidden at the Al Aqsa Mosque, which then were used by three Israeli Arabs to carry out the attack on Israeli policemen just outside the compound. Two Israeli Druze policemen were killed.

The terrorists fled back to the Temple Mount, where they were shot dead. One of the attackers even played dead, only to leap up with a knife in hand to stab more policeman, before he was shot.

In a June 2016 post, Prof. Miriam Elman documented the long history of Palestinian incitement regarding the Temple Mount, More Temple Mount incitement: “Allah, annihilate all the Jews… enable us to kill them!”. Al Aqsa conspiracy claims being used to incite violence against Jews has a long history, including the 1929 Hebron Massacre of Jews.

That incitement continues unabated to the present, even before the recent terror attack.

The response to Israel shooting dead the attackers was more incitement:

Israel now has identified an accomplice to the three terrorists, who has been arrested. The Israeli police released a video showing how the attack was carried out. The Times of Israel reports:

Police on Thursday released video footage from the terror attack at the Temple Mount last Friday showing how the assailants were assisted in smuggling the guns into the Al-Aqsa Mosque there on the morning of the shooting….

“This is all the footage and information available at this stage of the investigation,” said police spokesperson Mickey Rosenfeld.

Following the attack, Israel took the rare step of closing the Temple Mount for the first time in nearly 50 years in order to search for more weapons, before later reopening the site to Muslims on Sunday and non-Muslims on Monday after installing metal detectors at the entrances. Such detectors were previously only in place at the Mughrabi Gate entrance to the Mount, the sole entrance for non-Muslim visitors.

The decision to place the metal detectors at the Temple Mount’s gates following the shooting has been met with widespread outrage by Muslim leaders, with Waqf officials calling on Muslims not to enter the site until they are removed.

After the terror attack, Israel installed metal detectors at the entrance to the Temple Mount.

That’s because the metal detectors are the excuse, not the reason, for the protests.

Those protests were full of anti-Jewish chants.

Chanted next to Bab al-Majlis: "Khaibar you Jews, Mohammad's are will return." Seconds later stun grenade were shot pic.twitter.com/ABJ6JGBP6w

Parts of the crowd shouting "how beautiful it is to kill soldiers, officers and border police" pic.twitter.com/DUzie9v1Yc

"With our souls & blood, we will protect u #AlAqsa." Pal chant while marching in East Jerusalem via @MiddleEastEye pic.twitter.com/XLflkoSKs5

So what was the result of today’s Day of Rage?

Bethlehem: In support of al-Aqsa, violent clashes took place between the youths and the Israeli occupation forcespic.twitter.com/LZ0qpqYsmM

But nothing has changed, except perhaps to reinforce the view that the Palestinians don’t want peace. If they did, they’d welcome measures to prevent weapons being smuggled onto the Temple Mount and into Al Aqsa Mosque.

This will not change until they can craft a sympathetic Mandela-like figure(s) and assemble an international force to open the abortion fields (a la Libya, Syria, Ukraine).

Let me guess – you can always tell when it’s going to be a “day of rage” when it ends with the letter “y”.

I understand you are probably joking, but the Muslim Middle East actually has a designated “day of rage.” It’s Thursday, if I am not mistaken. (No kidding.)

Can’t be. Didn’t the State Department recently report that Abbas and his buddies do not incite acts of violence?

Muslim violence is always spontaneous, don’tcha know. No leadership and no planning needed. Get enough Muslims together, and they’ll spontaneously go looking for rocks to throw, make and throw fire bombs, and go on stabbing sprees.

The day of rage ended with a massacre of a Jewish family on Friday night at their Sabbath meal. 3 members of the family – father and 2 adult children were murdered, the mother was badly injured. The wife (now widow) of the son managed to shove their children into a room and lock the door. A neighbour, a soldier on leave, rushed to the scene and shot the terrorist.