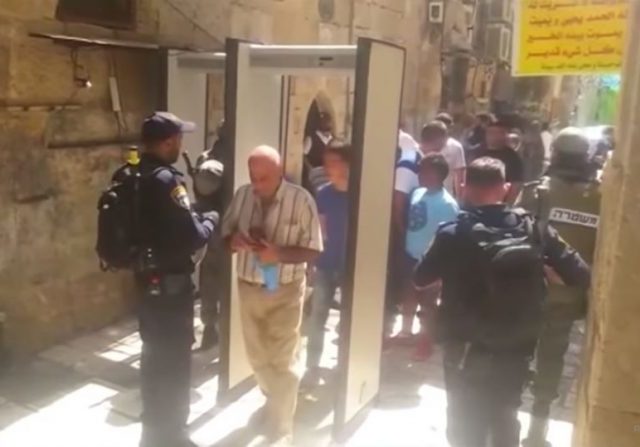 After three Islamic terrorists used weapons hidden at the Al-Aqsa Mosque to kill two Israeli policemen, Israel placed metal detectors at the entrances to the Temple Mount. Just as there are already metal detectors to enter the Western Wall area, the holiest place at which Jews are allowed to pray.

The placement of metal detectors led to a wave of Palestinian violence (including the stabbing death of three Israelis having Sabbath dinner). There were many other threats of holy war against the Jews incited not just by Palestinians, but also by other Muslim leaders around the world.

Under threat of increased violence, and with the Jordanians effectively taking Israeli Embassy staff hostage, Israel capitulated in what appeared to be a deal for the release of Embassy staff in exchange for removing the metal detectors.

As I wrote in Israel capitulates to Palestinian terror, to remove metal detectors at Temple Mount. Israel said it would use other means of monitoring who entered the Temple Mount to prevent weapons smuggling, but Palestinians immediately announced they would not accept any additional security measures.

Mahmoud Abbas, who broke off security cooperation after the metal detectors were installed, says removal will change nothing:

Palestinian Authority President Mahmoud Abbas said on Tuesday he will maintain a freeze on security coordination with Israel, despite the removal of metal detectors and security cameras from the entrances to the Temple Mount.

“Unless all measures go back to what they were before July 14, there will not be any changes,” Abbas said, referring to the date on which two Israeli police officers were shot dead just outside the compound. The terrorists, three Israeli Arabs, used guns that had been smuggled into the holy site by an accomplice.

“All the new Israeli measures on the ground from that date to the present are supposed to disappear,” he said. “Then things will return to normal in Jerusalem and we will continue our work after that in relation to bilateral relations between us and them.”

The riots have continued:

The rhetoric and calls to violence have only increased.

Fatah: NO to CAMERAS https://t.co/pyqx8DKaHV

Protestors back at Lions Gate: "We want bullets, we want rockets. The people will liberate Al Aqsa." pic.twitter.com/PbVR3qRfPZ

Palestinian leadership calling tonight for escalation in popular struggle against Israel and have Friday's prayers outside mosques.bad.v bad

Now the anti-Semitic thug dictator of Turkey has joined the incitement, calling on all Muslims to unite to “defend” the al-Aqsa Mosque.

Turkish President Recep Tayyip Erdogan called on Muslims worldwide to “defend al-Aksa,” as the government’s decision late Monday night to remove controversial metal detectors at the site did not have an immediate calming effect.

Erdogan issued a blistering attack on Israel at a meeting in Turkey’s parliament of his AKP Party….

“By relying on its backers and the weapons at its disposal, Israel is making a mistake. I call on all Muslims around the world to go on a pilgrimage to al-Aksa, to Palestine – if they are able to – or find a way and help our brothers therein if they’re unable to travel. The more we defend al-Aksa, the fiercer the resistance will be. If Israeli soldiers are dirtying al-Aksa with their boots, the reason is we fail to defend it decently. Let’s defend Palestine just as we defend Mecca and Medina.”

The Israeli Foreign Ministry reminded him that the Ottoman Empire is over:

Bring back the metal detectors. Negotiation 101.

lol why stop at that? declare the site off-limits to Muslims. Declare that Jewish prayers are now allowed on the temple mount. Then hold a ceremony with religious figure to commemorate it. Sound the shofar as the Sabbath begins on Friday.

Close the site down entirely. Then negotiate.

Bring up artillery. Aim at West Bank. Aim at Muslim Jerusalem.
Bring back metal detectors.
And say we have had enough of of your savagery and BS. You want another war, start it. Prepare to die.

Buy them tickets to Germany, Sweden or Minneapolis.

With good reason, no one wants them.

Minneapolis ?????
no way – get them out of Minneapolis too –
remember last week Somali Koppo kills WHITE woman from passenger seat not charged.

I’m disappointed that Israel caved so quickly to the whiny palestinians. Those low life’s only want to kill any/all Israelis so keep the metal detectors and full body searches or better yet,, ban them all from Israel land !!

Looking at the history of the Middle East, it seems clear that excessive inbreeding has led to the whole population being deranged. Half measures have not worked, take the gloves off and cause so much lose of life and property damage that Palestinians cry uncle.

Due to the actions of Prophet Muhammad and the Rightly-Guided Caliphs, marriage between cousins is explicitly allowed and even encouraged in Islam. The Qur’an itself does not discourage or forbid this practice in any way. In fact it implicitly allows it, as seen in chapter 4 verse 23:

Worldwide, it has been estimated that almost half of all Muslims are inbred:

return to the planet of the apes –

Judaism also allows and encourages uncle-niece marriage (but not nephew-aunt), though this is uncommon for the practical reason that uncles and nieces are usually not of similar ages; it takes a large gap between the oldest and youngest for the youngest son to be of compatible age with the oldest child’s daughter. But it happens, and colonial Rhode Island specifically included an exemption for Jews in its law banning such marriages for Christians. This too does not seem to have had any deleterious effect on those who practiced it.

Genetically, this is called “close breading”. It is purposely done in animals to fix certain characteristics that are “good”. It’s how you get different breed of animals, for instance.

However, it has the opposite effect as well, and often produces off-spring that suffer from multiple genetic defects. Some are so defective they are “lethals”, or individuals that die in development or shortly thereafter.