“The Clerk shall CLOSE the case.” 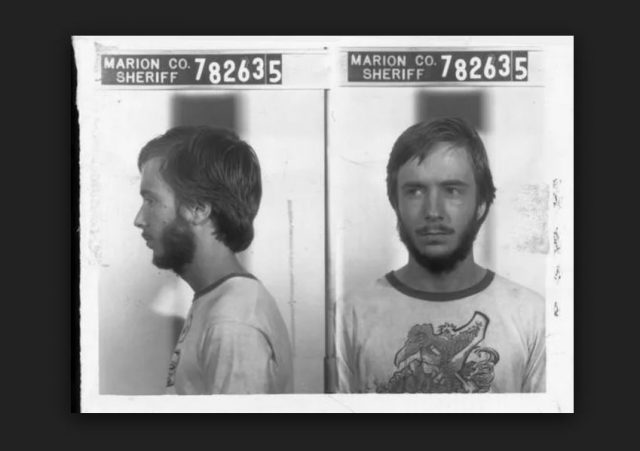 We have written several times about lawsuits commenced in Maryland federal court by Brett Kimberlin against numerous conservative bloggers, including our Editor Emeritus Mandy Nagy (“Liberty Chick”) based on her writing about Kimberlin when she was at Breitbart.

Our most recent update on Mandy’s condition, from a little over a year ago, is here. I think about her often, and hope to have another update by the end of the summer.

Kimberlin was convicted for the 1978 Indianapolis Speedway Bombings. After release from prison, he became involved with various social justice causes, but along the way came into conflict with various conservative bloggers over coverage of his conviction and activities. The result were multiple lawsuits.

Our last post about the Maryland federal lawsuit was by Amy Miller on March 17, 2015, Brett Kimberlin lawsuit against Mandy Nagy dismissed.

Brett Kimberlin’s lawsuit against Mandy Nagy and other conservative bloggers has been, for the most part, dismissed in federal court.

He will be allowed to file in state court if he chooses.

Professor Jacobson is heading out to moderate a law school event, but he wanted to let everyone know how thankful he is for this result. “The federal lawsuit is completely dismissed as to Mandy,” he said. “For that I am thankful. I hope that Mandy now can be left to recover from her stroke and surgeries. She deserves time to heal.”

You can read the decision here.

There was a separate state court lawsuit, which we covered in Bloggers defeat Kimberlin defamation suit in state court trial.

The federal court lawsuit has been meandering through the system, with an enormous number of docket entries, with Patrick Frey (of Patterico) the sole remaining defendant. That lawsuit was just thrown out of court, with the court granting Frey’s motion for “summary judgment.”

The Memorandum Opinion (pdf.) and Order are embedded in full at the bottom of this post.

The gist of what was left in the suit against Frey, and was just thrown out, was that Frey allegedly used his position as an Assistant District Attorney in Los Angeles to try to stifle Kimberlin’s free speech rights. The background was that Frey was “swatted,” that is, someone falsely called the police to his house claiming there was a crime in progress for the purpose of having the police arrive with guns drawn. In such a scenario, there is a risk of an unintended confrontation and possible use of weapons by police.

Here’s how Frey described his experience:

On July 1, 2011, Frey, in his nighttime blogger role, was talking to a source over his cellphone just after 12:30 a.m. — his wife and kidsfast asleep upstairs in their Rancho Palos Verdes home — when he heard a thunderous pounding at his front door.

“I was sitting right here in this chair,” he says, re-enacting thehaunting experience as he sits at his kitchen table, the South Bayharbor gleaming up through hot glass.

“I jumped up to the counter … and peeked around the corner,” hesays. Five or six armed deputies on his porch were barking, “Come outwith your hands up!”

As he opened the door, Frey, afraid to set down his cellphone — anyquick move could be deadly — prayed they wouldn’t mistake the device fora gun.

But the cops were cautious, and no shots were fired. Deputies handcuffed the longtime deputy DA and hustled him into a patrol vehicle.His stunned wife, Christi, was patted down against the garage wall.

Kimberlin, who denies involvement, claimed that Frey used the power of his office to retaliate against Kimberlin by urging the L.A. District Attorney to investigate. That, Kimberlin claimed in the lawsuit, chilled Kimberlin’s 1st Amendment rights. Kimberlin sued on many grounds, but only one ground survived motions to dismiss, namely, depriving Kimberlin of his constitutional rights under color of state law (42 U.S. Code section 1983).

The Court found that Frey was acting “under color of state law” (i.e., as a government actor) in urging the District Attorney to investigate Kimberlin. But the court found that Kimberlin failed to present any sufficient evidence that Frey’s actions were the cause of any damage to Kimberlin.

Here are some excerpts from the pertinent portions of the opinion:

Nonetheless. Plaintiffs claim ultimately tails because he is unable to establish the final element. causation. To establish causation. the plaintiff must demonstrate a “but-for” connection betwcen the speech and the retaliatory conduct. The Fourth Circuit has repeatedly described this requirement as a “rigorous” one. holding that “it is not enough that the protected expression played a role or was a motivating factor in the retaliation: claimant must show that but for the protected expression the [government official I would not have taken the alleged retaliatory action:’ ….

As the Court has discussed above, Frey’s personal blog posts arc not state action. Thus. Frey’s first conduct acting under color of state law occurred on August 4, 2011, whcn Frey sent an email to Ingalls. requesting that their office take certain investigative steps with rcspect to thc swatting. ECF No. 391-48 at I. This action was nine months after Frey became aware of Kimberlin’s complaint. but just one month after the actual swatting. Such an extended time frame between the initial complaint and the swatting investigation breaks the casual link between the protected activity and the alleged retaliatory act and Kimberlin has put forward no evidence to suggest that this was Frey’s “first available opportunity” to take retaliatory action….

Although. Kimberlin must. as discussed above. meet the higher “but-for” causation standard. the Court further holds that Kimberlin has tailed to satisfy the lower “substantial factor” standard. While Frey clearly is motivated to pursue Kimberlin, Kimberlin has failed to submit evidence rather than his own strongly held convictions. that Frey’s actions were motivated by an improper retaliatory purpose, rather than his desire to spur law enforcement to investigate a crime of which he was the victim. Thus, the Court holds that Frey is entitled to Summary Judgment with respect to Kimberlin’s claim of First Amendment retaliation.

… My deepest thanks go to my pro bono counsel: Ron Coleman of Archer & Greiner and the Likelihood of Confusion blog, and Bruce Godfrey of Jezic & Moyse LLC.

I can’t say enough about these guys. They stood by me at all times, working for no pay — all for the righteous cause of defending free speech. Ron Coleman juggled this case with his internationally known pro bono case for the Slants, which resulted in total victory and a landmark opinion for free speech. In addition to his fine legal work with Ron on the briefs, Bruce Godfrey dealt with a prickly and difficult client (that’s me!) on discovery issues, and spent countless hours cataloguing, redacting, and organizing the voluminous discovery — not to mention dealing with the court and Kimberlin, and navigating me and Ron through the Maryland legal world….

These guys also work for pay. You should hire them.

I would be remiss if I did not mention as well the efforts of Kenneth P. White of Brown White & Osborn LLP and the essential Popehat blog. Ken not only provided strategic advice and endured dozens (hundreds?) of emails about the case, but he and Ron also handled the frivolous lawsuit against me by Nadia Naffe — another total victory where I paid nothing and retracted nothing I had said. The Naffe case was cited by Judge Hazel in today’s decision, and provided an important precedent for free speech by prosecutors and other government employees…. 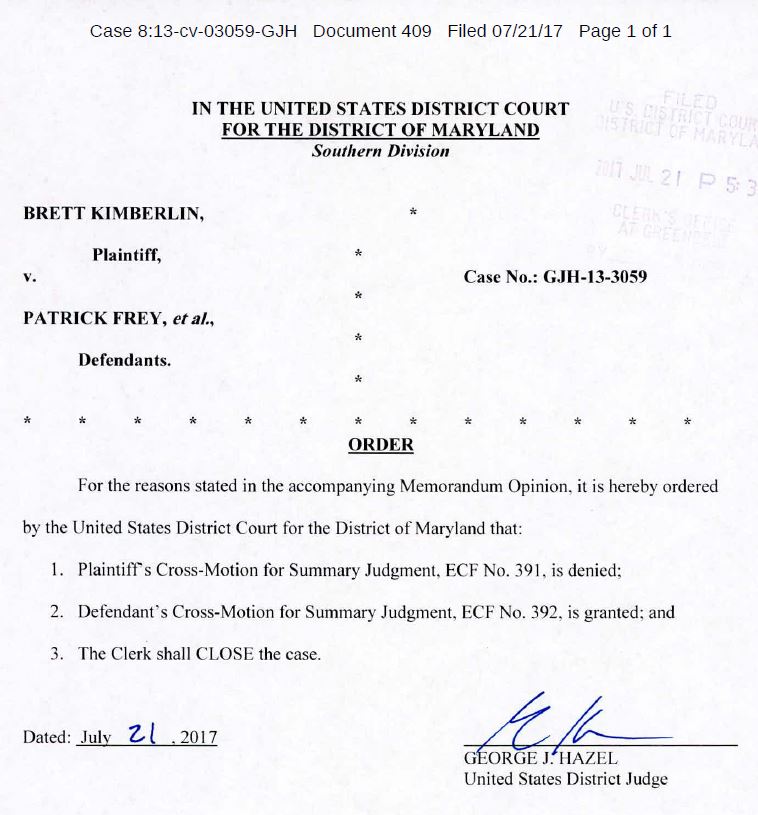 Hadn’t heard anything about that scumbag Kimberlain in a long time. It’s good to see that his antics got slapped down and his victims earn some well deserved justice.

I think he’s trying to get a line in the Wikipedia entry for ‘Vexatious Litigation’ without having to learn how to edit a Wiki.

Great news! Any penalty against Kimberlin?

heh – William Hoge has a suit against BK coming to trial on Aug 21, I believe. The preliminaries have been – entertaining. The trial result will be even more so.

There is also on odd thing that has happened this summer, something that at this point all anyone can say is that it is quite odd. Tetyana, BK’s wife, has gone missing for the last 6 – 8 weeks, and in court filings, Brett has been suspiciously vague about her whereabouts. And it’s about to cause some real legal trouble for her; commensurate with the trial, there is a scheduled show-cause hearing for her absence at any scheduled depositions. If she doesn’t appear for that, sanctions will be applied.

Many people who have followed this case have been concerned for her safety for years; we hope that there is some reasonable explanation for her apparent sudden disappearance. Time shall tell.

Speaking of odd, my great-grandfather’s name was William Hoge XXXXXXX.

Eh, I once owned a Hodaka Combat Wombat.

Amazing he hasn’t been declared one by now.

The police are simply too stupid to know how to detect SWATs and too stupid to retrace the calls. But they will gladly kill everyone in the home including the family dog on an anonymous call from a liberal. It has happened throughout the country.

The police are entirely capable of tracing calls to try to detect swatting … they just don’t.

Has there been a documented case of a SWATTING that has resulted in loss of life? I’m asking, I’m not aware of any but I’d like to be educated if there are.