Dave Weigel: Kimberlin says the bloggers will face “endless lawsuits for the rest of their lives.” 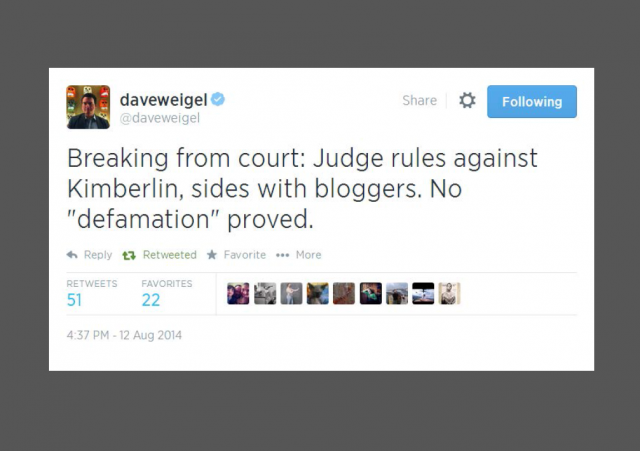 We mentioned earlier today, in our post about the federal court suit by Brett Kimberlin, that some bloggers also were subject to suit in a state court case as to which the trial was ongoing.

Dave Weigel from Slate.com was at the trial, and just tweeted:

Breaking from court: Judge rules against Kimberlin, sides with bloggers. No "defamation" proved.

We all won! #BrettKimberlin @BomberSues @rsmccain @AaronWorthing @wjjhoge (Directed Verdict, judge refused to let it even taint the jurors).

Pictured: @wjjhoge in front of the courtroom where he (and @ali et al) beat Brett Kimberlin. pic.twitter.com/3AOP2caA5H

Kimberlin tells me he’ll appeal, and that as far as the bloggers go there’ll be “endless lawsuits for the rest of their lives."

This is how @rsmccain celebrates when he beats a defamation rap. pic.twitter.com/ceUdScb5CP

We win, and Brett Kimberlin loses!

UPDATE—We did not put on a defense. Judge Johnson ruled that The Dread Pro-Se Kimberlin did not present evidence of the torts he was alleging, and he ruled in our favor as a matter of law after TDPK rested his case.

UPDATE 2—I’d like to offer my thanks to all of you folks who have offered your prayers and encouragement. I’d like to thank Patrick Ostronic, who provided Aaron, Stacy, and me with a pro bono defense. Thanks are also due to Ken White for putting up the Popehat signal on our behalf and to Glenn Reynolds for the Instalanche of Ken’s post that alerted Patrick to our plight.

Sad thing is, it won’t stop him. It’ll probably just make him mad.

Sunlight is the best disinfectant. Kimberlin is a moldy slime that thrives best in dark damp environments.

Kimberlin tells me he’ll appeal, and that as far as the bloggers go there’ll be “endless lawsuits for the rest of their lives.”

Hopefully the courts recognize this intentional abuse and bar him from engaging in this vexatious litigation.

The guy files locally. His costs are minimal – mainly gas to get there and filing fees – and he probably gets it from his “non-profit orgs” budgets. He brags that he has filed over 100 suits and how much it costs his victims in time and money to address them.

His record is something like 2-110 now. Kimberlin doesn’t care about “winning” – he’s a sociopath, not an idiot, he knows he has no cases. But he takes joy in tormenting those who tell the truth about his criminal history.

Until some judge cowboys up and designates him “vexatious” so he needs pre-approval from a court to file anything, he will continue his lawfare attacks.

Or until he harasses the wrong guy, of course.

“endless lawsuits for the rest of their lives”

Grounds for prison, if he keeps it up?

Nope, no chance of that, and there is almost no downside to his continuing harassment. The worst thing that could happen to him is being declared a “vexatious litigant”, which only means he has to get court permission to pursue his “lawfare” campaign.

Typically, a “vexatious litigant” needs to have his filings cleared by an administrative judge – meaning there needs to be a legitimate case before he is allowed to file.

The idea a convicted bomber, perjurer, and deadbeat could sue for “defamation” at all is a mark against the system.

With people like Kimberlin, the truth is more damning than any lie could imagine.

What an absolutely miserable, infantile twit Kimberlin must be, spending his time and resources harassing bloggers who hold viewpoints at variance with his own. I wonder if this guy is mentally ill? It’s hard for me to fathom why or how a mentally/emotionally healthy person would act like this.

Of course Kimberlin is a mental case. he is a serial bomber, a likely murderer, and a DemonRAT party activist…the last says it all.

His non-profits were getting money from prominent liberal donors until all the publicity about his terrorist bombing past and affinity for young girls came about. He is trying to intimidate people so he can eventually tap into that market again, and to exact revenge on those who told the truth about him.

Brett Kimberlin is a pretentious ass … in my personal opinion 🙂

He has a criminal record that is simply scary . Unfortunately he garners followers .who do his harassing & eve legal work voluntarily . More than at bit of Charles Manson there .

Suspected by many of killing the girl’s grandmother for. Better access to said girl.

And the only eyewitness to the murder, the girl’s grandfather, died before he could testify.

In a just world, he’d be in prison for the rest of his life, constantly looking over his shoulder because of what other prisoners do to the likes of him.

The guy is a fairly stupid psychopath (they tend to be rather intelligent, so he’s a bit unusual in that regard).

The only reason he’s still around is that he’s not pissed off the wrong person yet. That will happen eventually.

Exactly. Someone should tell Kimberlin that it will be legally impossible for his heirs to recover damages for any harm that might accrue to his reputation after he’s dead …

Congratulations! I love it when Common Sense wins. Kudos to the judge.

Kimberlin represents himself, but lawfare on the scale he engages in still takes some money. I wonder where his comes from?

He is smart enough to milk lefty trends. He jumped on several of them to front his drug business back when he was the Speedway bomber. While in jail, he jumped on the anti-Dan Quayle bandwagon. After the hanging chad controversy of the 2000 election he organized a not for profit on the issue of ballot security and was actually featured in one of dying newsweeklies talking about voting procedures ow Bush stole the election. Then he jumped on conservative bloggers being a hazard to the dominant left wing media and began suing them.

The pattern is that he tells lefties what they want to hear. Which of them continue to feed Bret Kimberlin?

At one stage he set up a music charity/ venture which was funded by Barbra Streisand . So I would say he is sucking rich lefties.

It costs him nothing but the filing fees.

He has no assets in his name to avoid paying judgments, but knows enough not to try to file as a pauper because the filings get screened then, too.

But all he has to pay is filing fees and the costs of serving the defendants. He doesn’t use a process server, relying on the mail, and is too cheap to even spring for the signature return fee which is required to prove service.

And how much did this cost the defendants in legal fees and wasted time?

In my case (two lawsuits that were thrown out), twenty thousand dollars and three years.

At least the bloggers had some pro bono help.

“Kimberlin tells me he’ll appeal, and that as far as the bloggers go there’ll be “endless lawsuits for the rest of their lives.” ”

With the order of dismissal in hand, the defendants can file a malicious prosecution suit. They can get a judgment, and very likely damages in the amount of their attorney’s fees. Chances are, Kimberlin is judgment-proof at this time. However, the judgment will apply as res judicata against any of Kimberlin’s future suits based on the same facts and can be recorded against any future income or funds within his control. Further, anybody else can use that decision defensively against him. Finally, if he ever gets the bright idea of writing a book about his antics, or to fundraise, his income will be subject to the judgment.

I really hate the automatic spell-check that does not include legal terms. It keeps inserting nonsense words in place of the proper terms.

You can add legal terms to your browser’s spell check, which is a small compensation.