“They are crazy …. They have such a beautiful country and they’re destroying it.” 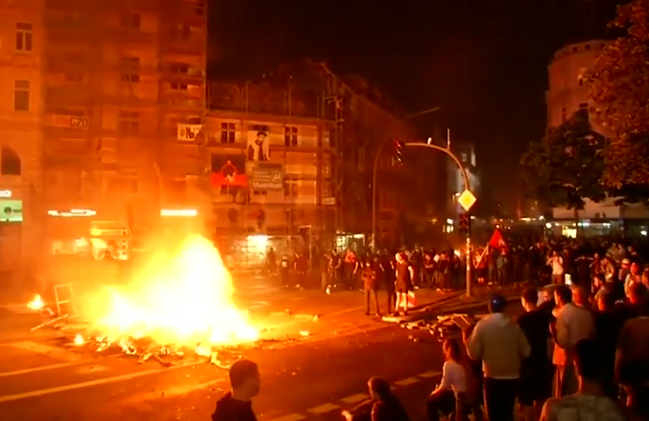 The leftist G20 riots in Hamburg continue even as G20 leaders leave the city.  The violence and destruction have ravaged the city, with one resident saying Hamburg feels like a “war zone.”

Anti-globalization activists have rioted for a third consecutive night in Hamburg even after Group of 20 leaders had already left the northern Germany city.

Police used water cannon trucks again early Sunday against rioters attacking them with iron rods and pavement blocks. They arrested 144 protesters and temporarily detained another 144 persons. More than 200 officers have been injured in the violence since Thursday. The number of injured protesters wasn’t clear.

The level of violence is shocking to some Arab refugees who note that the protestors are “crazy” and “would be shot” if they did this in Egypt.

Arab refugees watching anti-G20 riots in Hamburg from the relative safety of a falafel joint said on Saturday the rioters were insane for destroying their tolerant adoptive city and were astonished by what they saw as the police’s restraint.

“If people did this in Egypt they would be shot,” said Ibrahim Ali, a 29-year-old Egyptian who came here in 2011. “The state provides everything: housing, unemployment benefits and education. Yet those people are not happy. I don’t get it.”

Ali and two more refugees from Syria and Egypt were serving beer, falafel, hummus, tabouleh salad and other Middle Eastern delights to protesters who had started leaving the Sternschanze quarter as police special units moved in against the rioters.

“They are crazy. I can’t believe my eyes,” said Mohammad Halabi, 32, a Syrian who arrived in Germany as a refugee some 18 months ago. “They have such a beautiful country and they’re destroying it.”

Residents of Hamburg are reportedly angry at German Chancellor Angela Merkel for failing to contain the rampaging Antifa and other black bloc rioters.  The Arab refugees, however, are not upset with Merkel and are instead grateful to her.

Hours after police wrestled back control of Sternschanze, a traditional venue for leftist protests, residents and shopkeepers came out to inspect the extent of the damage.

Some helped municipal workers who had been cleaning the streets since dusk, removing glass, concrete slabs and stones that had been hurled at police.

All said they were angry at Chancellor Angela Merkel’s decision to hold the summit in their port city as they had feared that militant members of the Black Bloc anarchist group would resort to violence.

“It’s scary what happened here,” said teacher Sandra Janowitz, 28. “But I don’t blame the demonstrators. Most were teenagers who don’t know what they’re doing. And many were foreigners. They went home and we have to deal with this mess.”

Merkel on Saturday defended her decision to hold the summit in the city of her birth, praised the police’s security operation and said that residents would receive compensation.

Unlike native Hamburg residents, Halabi said he cannot be angry at Merkel.

“Without her I wouldn’t be here,” he said, referring to the chancellor’s decision to welcome refugees.

Merkel is attempting to defend her handling of the G20 and has promised to compensate residents of Hamburg for their losses.

The humiliated German Chancellor has now promised compensation to Hamburg residents whose property was damaged as she attempted to defend her decision to host the summit in the city.

The German Chancellor had wanted to demonstrate to G20 partners, including Russian President Vladimir Putin and Turkish President Tayyip Erdogan, her commitment to freedom of speech and rejected the notion that some cities were out of bounds as summit venues.

But the summit backfired with German newspapers devoting far more space to pictures of police firing water cannon onto hooded anarchists and other protestors than they did to Merkel’s diplomatic balancing act with fellow leaders of major world economies.

When the Arab muslims say you’re crazy, you got a problem.

This is the government and policies that Germans freely chose and voted for. They had freedom of choice, they do not have freedom of consequences. I hope they enjoy the journey to the end.

Ya know, I’ve noticed that these anarchists only do their anarchist sh!t in cities that are run by Democrats in the US, and Euroweenies in Europe.

I wonder why that is. /sarc

I think there may be a viable exchange scenario, opportunity.

If they’re so puzzled, tell them to review the following story on LI:

They’ll see where this Nazi-redux fascism is coming from.

A German refugee of Egyptian heritage says he can’t understand why people destroy their own community because it’s beautiful while another refugee points out the government provides housing, education, unemployment and whatever else a person needs. We see AntiFa doing the same thing here and we wonder why those, mostly upper middle-class kids, in nice communities can destroy things all while receiving (in many cases) PELL Grants and or Stafford loans.

Then we read the German teacher telling us that she can’t really blame the protestor’s because they’re kids and besides many aren’t from there. Gee, isn’t that what BLM told us in Ferguson, St. Louis, Baltimore and so on?

Finally we here Ms. Merkel promise to compensate the victims after the destruction instead of stopping it before hand not unlike Baltimore.

Funny isn’t it, leftist in Europe seem to behave just like the leftist we have here in good old America.

“The level of violence is shocking to some Arab refugees who note that the protestors are “crazy” and “would be shot” if they did this in Egypt.”

They’d get shot for it in Chicago, too.