Rioters prevented Melania Trump from entering a building to attend an event for spouses. 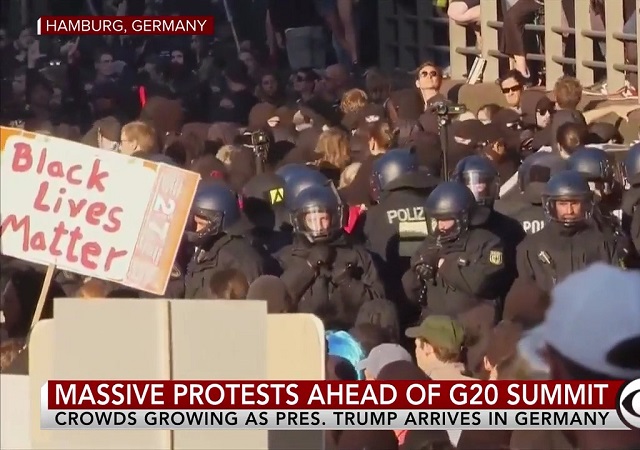 Riots have erupted in Hamburg in the backdrop of the G20 Summit — a meeting of world leaders representing the leading economic powers — that began early today. Around 100,000 left-wing activists and anarchists have reportedly descended on the city to protest the summit. Before the summit could even begin, ninety police officers were injured in the clashes with rioters. A “central part of Hamburg has been transformed into a fortress” reported Germany State-run DW News.

The U.S. First Lady Melania Trump was blocked from attending an event organised for the spouses of leaders attending the G20 Summit in the German city of Hamburg by violent protestors. President Donald Trump and the First Lady arrived in Germany yesterday to attend the summit following a brief stay in Poland.

“The protestors prevented the U.S. First Lady Melania Trump from taking part in the event meant for the spouses and was forced remain at her place of accommodation, the State Senate guesthouse at the Outer Alster Lake,” reported the local newspaper Hamburger Morgenpost.

“These are ugly and scary images that come out of Hamburg,” writes German newspaper Die Welt. “[Considering the fact that] the city wanted to show its best side to the head of governments and states of great economic powers.”

“Embarrassment for Merkel as G20 protests turn violent in Hamburg,” wrote the French broadcaster Euronews. “Security forces estimated earlier that of 100,000 demonstrators expected in the northern port city, some 8,000 were ready to commit violence,” the broadcaster said.

All day, Hamburg held its breath. With just 24 hours to go until the start of the G20 summit, the usual traffic noise died down. An eerie silence ruled in the city center, only punctuated by the sound of passing police helicopters. It was a silence most people knew would end by the time the evening came.

Thursday’s big demonstration against the summit, titled “Welcome To Hell,” was the first serious test for the police. Flyers from the organizers instructed people to “be noisy, angry and combative.” The police knew that this would be the first proper gathering of the “Black Block” – the extreme anarchist end of the anti-capitalist movement.

Seventy-six officers were injured in the subsequent clashes, five of whom had to be taken to hospital.

German media reported a spate of car burnings and other arson attacks across the city. 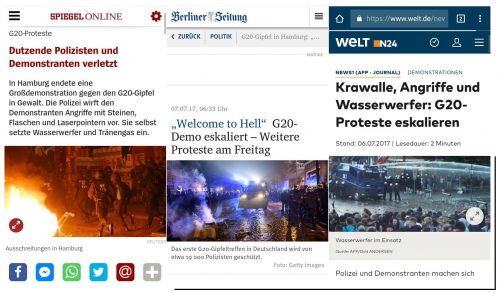 Ahead of the summit, President Trump and German Chancellor Angela Merkel are expected to meet. Merkel wants Trump to reverse last month’s decision to pull out of the Paris Agreement on climate change. “Merkel names climate change as the most important issue at G20,” announced the German weekly Stern as Merkel told a reporter ahead of the summit that the Paris deal is “irreversible.”

“Merkel declares climate war on Trump,” reported the German newspaper Bild some days ago. “In the government statement relating to the next week’s G20 summit, Federal Chancellor Angela Merkel attacked Donald Trump in an exceptionally direct way, especially due to his climate policy.”

When it comes to the political issues of the day, both Chancellor Merkel and the left-wing anarchists rioting in the streets of Hamburg agree on substance, if not style. The rioting, arson, and violent intimidation on display in Hamburg are all about pushing that leftist agenda by any other means.

German leftists that demanded a new “Welcome Culture,” or Willkommenskultur, from ordinary Germans in the wake of the migrant influx that began in 2015, are today burning private and public property, and attacking police under the banner of “Welcome to Hell.”

These German leftist radicals and ‘climate Jihadists’ do not represent an impoverished or disenfranchised minority. These pampered and privileged thugs are out to enforce the establishment’s internationalist agenda.

Observing the prominently displayed “..lives matter…” sign, it’s a cogent reflection of the Prog/Left/Dem/Facist (but I repeat myself) rabble’s core principle:

No more discussion or explanation is necessary.

How embarrassing for Fuhrer Merkel.

4th armored div in reply to notamemberofanyorganizedpolicital. | July 7, 2017 at 4:30 pm

Orson Buggeigh in reply to notamemberofanyorganizedpolicital. | July 8, 2017 at 9:17 am

Apparently these”protesters” who hate capitalism can’t recall the days of the iron curtain. Let them destroy their own neighborhoods.

They did burn down a Porsche dealership.

Huh, they were right. Carbon dioxide exhaling acolytes are a first-order forcing of catastrophic anthropogenic climate change, but first things got warm, even hot… under the collar.

“Merkel names climate change as the most important issue at G20….”

Tens of thousands of violent protesters in the streets disrupting the summit, burning cars, assaulting police, – effectively shutting down an entire city – and this blithering commie witch Merkel wants to talk about the weather.

What an idiot. If she doesn’t change her wicked ways, she’ll meet an inglorious end up on a lamp post.

Human lives matter. In moral philosophy, there is a law of conservation of principles. Thus there is neither a deprecation of individual dignity nor elevation of greater Welfare and vice versa, but rather a reconciliation of moral, natural, and personal imperatives.

Should all of these protestors loathe a capitalist state, then why don’t they just head to Venezuela? I hear it’s a worker’s paradise there.

just don’t drink the vasser – tequila and they are the
Worms/City in Germany.

They ought to move to North Korea rather than Venezuela.

It says much about the utter moral bankruptcy and warped values of the Left that they’ll whip themselves into a frenzy of indignation and self-righteousness over this summit, but, won’t lift a finger to protest against jihad and jihadist terror.

This is remarkably pointless. Nothing these demonstrators can do will have the slightest effect on anything.

No cogent or even coherent discussions, or even mere arguments, are being presented. Only street thuggery.

But even the thuggery is pointless, as there’s no real strength behind it; nothing more than petty annoyance. Woo-hoo, they burn a few cars … that will send the glitterati scuttling to shelter under their beds, fer sure. The only things less impressive than idiots are feeble idiots.

It doesn’t even make as much sense as BLM riots in the US, as at least the rioters can loot some of the things which the world’s “poor” need … like wide-screen TVs.

The only real effect is that G20 summits aren’t held in nice towns like Cologne or Stuttgart, but instead in industrial pits like Hamburg, where nobody will even notice the damage.

It’s worth noting that violent leftist riots are so commonplace that this is barely newsworthy.

And yet we’re still waiting for an example of the right-wing violence that media “experts” assure us is being inspired by President Trump.

This is all PDT’s fault, right?
Because the previous G20 summits were happy, peaceful affairs.

De Blasio just flew out to Hamburg to get pointers on the proper way to destroy NYC. Assassinating police officers one at a time while stranding tens of thousands subway commuters everyday just isn’t getting it done.

De Blasio has messed everything else up so far so he can’t afford to look like the world’s biggest loser ever when his sure-to-be-signature SHTF New York moment arrives, like that Empire State Building suicide jumper landing on an overhang one story down. Now THAT was a NY moment!