The branding of Warren as the fake Indian is so complete, it comes up in unexpected places like CNN. 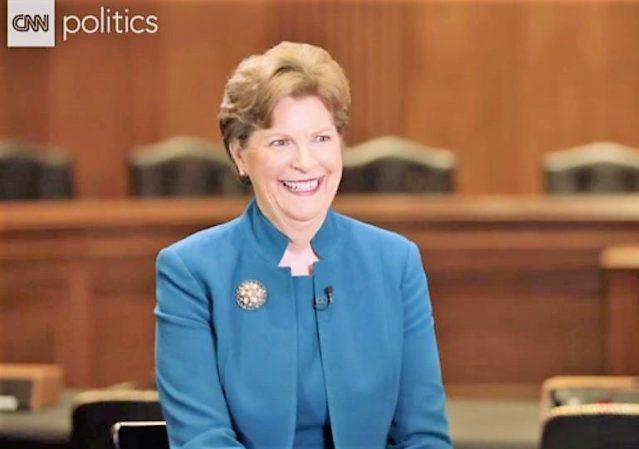 Elizabeth Warren has claimed at various points in her life to be Native American, most notably when she was climbing the law professor ladder. When she got tenure at Harvard Law School, she dropped the self-identification.

By all available evidence, Warren’s claims are false.

Warren never has come forward with any credible evidence, and Cherokee genealogists who have followed her family lines have proven there is no Indian ancestry (neither Cherokee nor Delaware).

Had Warren, when her Native American problem was discovered in 2012, simply fessed up to what she did, this probably wouldn’t be an issue anymore. Instead, Warren stood by her story, relying on convoluted (and mostly disprovable) “family lore” as a defense.

Being the “fake” Indian now is Elizabeth Warren’s brand, and nobody is branding her that way more aggressively than Donald Trump, as I wrote in late April 2017, Trump branding of Elizabeth Warren as Fake Indian continues, expecting her to run in 2020:

Trump doesn’t attack his political opponents, he brands them. The brand for Jeb was “low energy.” For Rubio, it was “little Marco.” For Cruz, it was “lyin’ Ted.” Once branded, they could not shake the image.

Which brings up Elizabeth Warren. As we posted earlier, while Warren is denying that she “is” running for president in 2020, she’s making all the normal pre-presidential run moves.

She’s raised her profile as the face of “the resistance,” a face Republicans also are jockeying to put out front.

Speaking at the NRA today, Trump warned that members should expect “Pocahontas” to run…

Trump is branding her. And being someone who was a fake Indian is her brand. She’ll never shake it.

The effectiveness of that branding was evident in a CNN interview with New Hampshire Democratic Senator Jeanne Shaheen, who claims to be a direct descendant of Pocahontas and to have the family ancestry documented. Pocahontas allegedly was Shaheen’s 11th Great Grandmother.

CNN raise the Pocahontas ancestry with Shaheen, and then dropped the bomb, whether Shaheen had mentioned it to Elizabeth Warren:

Q. Have you told Elizabeth Warren?

A. Kind of a sensitive topic, so probably not.

It’s probably too late for Warren to put her Native American problem back in the bottle. But a complete and unreserved apology would be a good start.

“…(both ancestry and cultural identification are needed).”

I don’t care. I am sticking to my claim of being a Mongolian-American and direct descendant of Genghis Khan.

So, I assume that you have a special place in your heart for John Kerry …

“They had personally raped, cut off ears, cut off heads, taped wires from portable telephones to human genitals and turned up the power, cut off limbs, blown up bodies, randomly shot at civilians, razed villages in fashion reminiscent of Genghis Khan, shot cattle and dogs for fun, poisoned food stocks, and generally ravaged the countryside of South Vietnam.”

Kerry makes it sound like my ancestors were barbarians. You had to be there to understand. Kerry was looking for his missing “magic Christmas hat” while claiming to be Cambodia. Don’t believe anything that rat says.

Isn’t almost everyone in Europe and Asia descended from him?

Half of the PLANET is related to him. The other half, mostly Elvis but catching up.

Phil, that’s absolutely the best comment of the day!!!!

Phil, you just might be descended from Genghis Khan. According to a news article I read some months ago, genetic professional who study this sort of thing say there is an identifiable genetic marker among Khan descendants and a little over 1.5 percent of the world’s population have that marker. You might just be part of the elite.

That’s just 1.5% of MEN. When you factor in women, it’s substantially more. And almost all North American natives are descendants of Mongols but predate Khan. So I am probably as much a Cherokee as either Warren or Shaheen.

It’s all silly nonsense. If any of us go back far enough, we are related to somebody of note. Adam and Eve come to mind.

I’ve studied my genealogy extensively and have determined that I am descended from Dennis the Peasant.

Now he did occasionally serve as chief executive of a lovely little anarcho-syndicalist commune.

Are you sure it wasn’t the famous Dennis the Shrubber? You know, the guy who accompanied King Arthur on his quest for the e Holy Grail?

Uhhh, apologize for what? Warren’t never claimed to be related to Pocahontas.

Very true….but that is not the gist of the story. What does a person with a real ancestry say to someone faking it? Maybe exchange some POW WOW CHOW recipes?

I good friend of mine is part Tlinget and part Haida (sort of Romeo/Juliet of warring tribes in that)… Ah…. rice with seaweed and salmon roe with candlefish oil drizzled over it…. yum. I wonder if Warren was asked to take a bite what would happen?

The apology would be for taking a job that was intended to be filled by a Native American when it was in fact taken by a white woman acting like an Indian. If you look at the history of Harvard Law School at the time she was hired it has been having problems with diversity of the professors. She had had herself listed in a registry of law school scholars as being Native American and given her otherwise mediocre education and credentials it was very clear that she was a quota hire to help create diversity within the law school. So somewhere there is a Native American that was turned down from the job because she stole it through fraud. Frankly no apology will rectify that act unless she is going to find out who the other candidate for the job was and reimburse them for all the monetary loss they had by being rejected so the faux-cahontas could take their place. She should also step down from the Senate as her entire career in politics was only made possible by the fraud she perpetrated long ago. Remember if a drug dealer uses their drug money to start a legitimate business it doesn’t give the dealer the right to keep that business when they get busted, the business is taken by the government as it was built from the illegally obtained money.

All very obvious, but it has little to do with Shaheen or Pohahontas. Now, if Shaheen had been kept out of the Senate because Warren was filling some place reserved for a token remote descendant of an Indian, then the two would have something to be “sensitive” about.

Because I consider AA in general to be an outrage and a disgrace, I’m not going to get torqued up about the possibility that a fake AA person eased a real AA person out of freebies and privileges I don’t think they should have anyway.

In that regard, warren is s thief.

At least Rachel Dolzeal (sp) actually had an affinity for Black Americans and has worked hard to help them.

With Warren you don’t see that. All she did was to appropriate another peoples culture for her own selfish gains.

THAT should mean she won’t run in 2020. If she does run then the Democrats deserve her.

I am 1/8 Blackfeet Indian, and when I go outside bare footed in the summer I can prove it.

Neither Warren or Shaheen currently represent that they are part of any recognized tribe.

Warren has indeed consistently represented herself as Cherokee and while she is no longer vocal about it, certainly has never once said that she was wrong, that she lied, that she misappropriated a culture not her own for personal financial and professional gain . . . so yes, she does represent that she is part of a recognized tribe.

The real irony is that the closest relative they could find that was involved in the Cherokee Trail of Tears (forced removal for the public school folks) was the white relative that was part of the Calvary forcing the Cherokees from their native land, which is even more ironic in that the Cherokee removal was in direct violation of a Supreme Court ruling that said the government had no right to force them out…. So ask yourself would you support a politician that claimed to be a decedent of a survivor of the Holocaust if it turns out that were in fact decedents of the SS that was running the concentration camp? That is what Elizabeth Warren is to a Cherokee.

Dances With Lies always tiptoes right up the the edge of tribal membership.

Oh Heavens NO! She doesn’t even come close to any kind of tribal membership.

I know, that’s why I said that. She never declares a tribe.

“But a complete and unreserved apology would be a good start.”

Being a liberal means never having to say you’re sorry

Being liberal also means you are never held responsible!

I was CONVINCED that my kids had some Native American ancestry from their father’s family- Onondaga tribe- and had them do the Ancestry DNA test. I’d hoped they could use the affirmative action ploy on graduate school applications, but no such luck!

Checks-the-Box wouldn’t meet with the Cherokee representatives when they came to Boston to help her research her mother’s stories. It’s amazing how tenure alters a person’s DNA and just how did she expect Harvard to make quota without her.

Phil, Dennis was actually the 37 year old communist “filth gatherer”. Roger was the shrubber. He would be so vexed with you, he may say “NI” to you.

Actually, the “filth gatherers” were constitutionalists, not communists. They were seized by King Arthur (“Help! Help! I’m being oppressed!”) for arguing against allowing a “moist tart living at the bottom of a lake” to select kings over people voting.

I’m descendant of the French Taunter. So there, you kaniggant. (heavy fake French accent)

What is funny about this is that most of us Latinos are large percentage Indians (I am 20% for example, which I know by way of 23&Me) so I always laugh at these whites who quibble abou being 1/475th Cherokee and such. Big deal, I’m 20% Inca… so what, does that mean I get free college education?

An Indonesian, an Indian, a Black woman and a Black man all walk into a bar…

4 very delusional Liberals who lied about heritage to gain monetary, educational and career advantages they did not deserve… But Liberals are good with that, it is when someone speaks the truth and calls it what it is, is when Liberals get their panties all twisted…

I’ll be glad to trade her my collection of beads and a case of fire water for her mansion in Cambridge!

My uncle traced our ancestry back to the Highlands of Scotland and it seems they were known for being cattle thieves. I guess that explains the feelings I get when I see a nice calf. I’m relieved to know it wasn’t sexual after all.

I am sorry to break it to Senator Shaheen, but none of Pocahontas’ children survived past their teens and none had children of their own. Noone living is a descendant of Pocahontas.

She’s probably as full of crap as warren.

Shaheen likel thinks the top is sensitive because it will expose her for the fraud she is as well as warren.

So now we have TWO democrat Fauxchaontases.

“It’s probably too late for Warren to put her Native American problem back in the bottle. But a complete and unreserved apology would be a good start.”