More unrest in the Middle East. 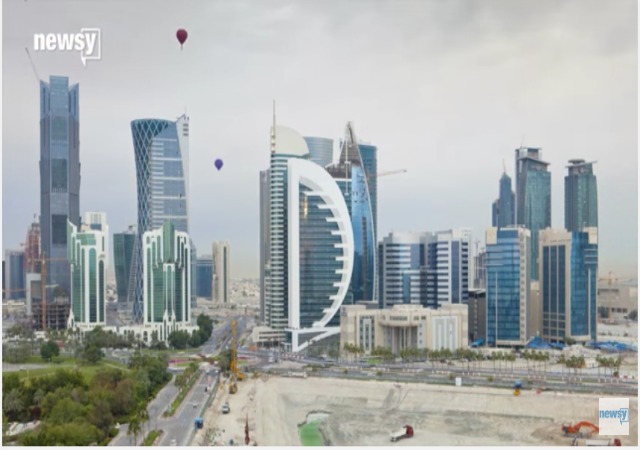 Officials in Saudi Arabia, Egypt, Bahrain, and the United Arab Emirates (UAE) have all announced the countries have severed diplomatic ties with Qatar due to terrorism and extremism. From The Guardian:

The official state news agency, citing an official source, said Saudi Arabia had decided to sever diplomatic and consular relations with Qatar “proceeding from the exercise of its sovereign right guaranteed by international law and the protection of national security from the dangers of terrorism and extremism”.

Saudi Arabia cut all land air and sea contacts with Qatar “and urges all brotherly countries and companies to do the same.”

Middle East Institute senior fellow Charles Lister pointed out this could affect Qatar in a major way since the country “‘is very heavily reliant on food supplies accessed’ through Saudi Arabia, so a closing of the borders poses a ‘very’ serious challenge to Doha.”

It’s not a shock Bahrain took similar action since it’s a close ally to the Saudi kingdom. Al-Arabiya reported:

“(Qatar has) spread chaos in Bahrain in flagrant violation of all agreements and covenants and principles of international law Without regard to values, law or morals or consideration of the principles of good neighborliness or commitment to the constants of Gulf relations and the denial of all previous commitments,” the statement read.

Qatari citizens have 14 days to leave Bahraini territories while Qatari diplomats were given 48 hours to leave the country after being expelled. Meanwhile, Bahrain has also banned all of its citizens from visiting or residing in Qatar after the severance of ties.

Meanwhile, Bahrain has has closed both air and sea borders with Qatar.

“The dangerous Qatari practices have not been confined to the Kingdom of Bahrain, but have also been extended to sister countries that have been informed that such acts reflect a very dangerous pattern which cannot be ignored or accepted and must be addressed with full strength and firmness,” a statement added.

This spat between Qatar and Saudi Arabia has been brewing for awhile now. While the statements only provided terrorism as a reason for the step, it appears comments from Qatar’s Emir Sheikh Tamim bin Hamid al-Thani had something to do with it. From Newsweek on May 26:

In the comments, which appeared on the Qatari state-run news agency, Qatar News Agency, Al-Thani said relations with Israel were “good,” and that Iran—the main rival to Saudi Arabia in the region — was a “stability guarantor” in the Middle East.

But the video also showed the emir praising terrorist groups. From DW:

“No one has the right to accuse us of terrorism – just because they declare the Muslim Brotherhood a terrorist group or because they are not ready to tolerate the kind of resistance embraced by Hamas or Hezbollah,” the emir was quoted in the video. He also appears to have said: “The real danger lies in the behavior of certain governments which have bred terrorism themselves – by adopting an extreme version of Islam which does not correspond to the truth (of Islam).”

However, Qatar claimed that hackers took over the state-run media agency and published these “fake comments from its ruling emir about Iran and Israel.”

The tension between Qatar and Saudi Arabia reach back to 2014 when Qatar supported then-Egyptian President Mohamed Morsi, a member of the Muslim Brotherhood. Saudi Arabia, UAE, and Bahrain recalled ambassadors from Qatar due to this move.

The three countries sent back the ambassadors after Qatar expelled some Brotherhood members eight months later.

Qatar used this Arab Spring as a way to gain more prominence in the Gulf. DW continues:

Qatar had supported the “Arab Spring” in particular through its broadcaster Al-Jazeera. Qatar’s leaders viewed the uprising as an opportunity for the small emirate to increase its political options in the region. To this end, it also supported secular movements that, either directly or indirectly, called the legitimacy of theocratic regimes into question – in particular, that of Saudi Arabia. The statements attributed to the emir were very much in accordance with Qatar’s policies up to now, Egyptian media researcher Hafez al-Mirazi told DW.

The relationship between Qatar and Saudi Arabia is also strained because of the two states’ different approaches to interaction with the Muslim Brotherhood. Whereas Qatar has, for a long time, considered cooperation with the Islamists as a way to gain influence in the Sunni world, Saudi Arabia repudiates them: After the kingdom took in numerous Muslim Brothers in the 1970s only to see them setting up an opposition movement against the state’s leadership, it has seen them as a threat to regional, and thus its own, stability. In Yemen, however, the Saudis don’t appear to have qualms about the Muslim Brothers’ influence.

I have been deported from Qatar and subject to arrest if I go back.

By all means U.S. Courts, let us keep allowing people from that country into the USA!

I must have missed the “National Suicide” clause in the COnstitution. Can someone point me to it?

It’s found in either an emanation or a penumbra; I never can remember which.

Did you bring something illegal in, like poker chips or liquor bottles from the airline? Wish I had the same problem, I don’t ever want to go back there.

Those stories are usually entertaining. I’ve got a good pal who got busted for DUI on the Autobahn, got out on recognizance, and rather than face the magistrate, caught the next flight back to DFW.

He says he didn’t want to go back to Germany anyways.

So…
Qatar: Boo USA! Yea Iran!
Saudis: That’s it. Get out of our country.
Qutar: Wait! Hackerz! Honest!
The rest of us: (Facepalm)

Saudi….huh. self introspection doesn’t seem to be their strong point….
Wahhabi say can I get a whut whut ?1?1

Yes, seriously. Saudi Arabia is a sharia state. However, the ruling house realizes that the djinn it loosed on the world, sending Wahhabi preachers everywhere, may cost it its throne and its life.

Saudi Arabia, Egypt, UAE and Bahrain have now stood, united, against Qatar and by default Iran and the various Islamic Jihadist Terrorist groups in the ME & North Africa. This is big news and will, if they follow through, have huge social and economic impacts on Qatar. It’s difficult to move oil without a pipeline (and Iran damn sure won’t let Qatar go through without a cost considering they’ve got product to move) or shipping.

This will be very interesting to see how it develops.

I wonder what this means for our very important air base outside Doha, the largest US base in the Middle East?

We can’t exactly dig that up and move it to a new Arab flavor-of-the-day site. Strangely reminiscent of the Saudis demanding we vacate their airbases a few years back. Rented allies are the worst kind.

What I’ve been reading about this latest brouhaha has me questioning how the US could continue having a base in this country which has been causing a lot of trouble in the region.
Basically it puts the US in opposition to the four Arab states which have severed relations with Qatar.

Bunch of filthy racists over there in the ME

I wonder, what effect this will have within the IMA (Islamic Military Alliance)?