18,000 member group says academic boycott of Israel “contradicts the MLA’s purpose to promote teaching and research on language and literature” 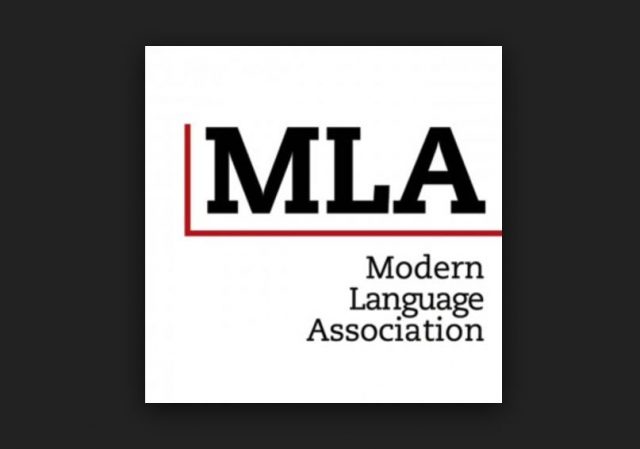 The academic boycott of Israel had been termed a grave threat to the academic freedom of everyone and the free exchange of ideas by over 250 university presidents and numerous prominent university organizations. Nonetheless, the academic boycott, which is part of the Boycott, Divestment and Sanctions movement, is a focal point of anti-Israel activist professors and graduate students.

We have highlighted this MLA Resolution in prior votes, including a recent post, Tables turned: Modern Language Association in midst of voting on Anti-BDS Resolution:

We have previously covered the never-ending saga at the anti-Israel obsession of some members of Modern Language Association (MLA).

Those members have engaged in a years-long attempt to get MLA, the largest academic society in the humanities, to boycott Israel and to officially join the “Boycott, Divestment, and Sanctions” (BDS) movement.

After the radicals’ massive defeat at the MLA business meeting at the annual convention in Philadelphia in January, they are on the defensive: not only was their resolution to boycott Israel (2017-2) defeated by the Delegate Assembly, but a counter-resolution (2017-1), calling on MLA to reject academic boycott, was approved and placed before the general membership.

For background and previous Legal Insurrection coverage of the MLA see:

Whereas endorsing the Palestinian Campaign for the Academic and Cultural Boycott of Israel contradicts the MLA’s purpose to promote teaching and research on language and literature;

Whereas the boycott’s prohibition of the evaluation of work of individual Israeli scholars conflicts with Resolution 2002-1, which condemns boycotts against scholars; and

Whereas endorsing the boycott could curtail debates with representatives of Israeli universities, such as faculty members, department chairs, and deans, thereby blocking possible dialogue and general scholarly exchange;

Be it resolved that the MLA refrain from endorsing the boycott.

When Resolution 2017-1 passed the MLA business meeting at that Annual Meeting allowing a full membership vote, there was fury from the boycott supporters, and threats to boycott the MLA.

The membership vote results were just announced by MLA, and the anti-BDS resolution passed by a 2-1 margin (emphasis added):

Resolutions forwarded to the membership must be ratified by a majority vote in which the number of those voting for ratification equals at least ten percent of the association’s voting membership. All members in good standing as of 17 April who were also members on 7 January, the date of the Delegate Assembly meeting, were eligible to vote. The number of eligible voters was 18,279, so 1,828 votes were required for ratification of the resolutions. The first resolution, which calls on the MLA to “refrain from endorsing the boycott” of Israeli academic institutions promoted by the Palestinian Campaign for the Academic and Cultural Boycott of Israel, was ratified by a vote of 1,954 yes and 885 no.

This represents a staggering defeat for the boycotters. MLA has almost 5 times the membership of the American Studies Association, the largest academic group in the U.S. to have adopted academic BDS.

Needless to say, supporters of the boycott are very unhappy with the vote result, and again threatening to engineer mass resignations: 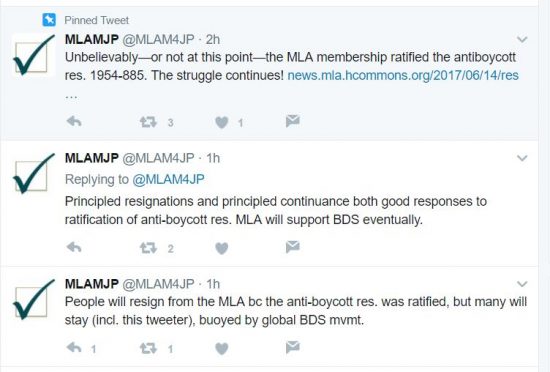 If the pro-BDS members of MLA do resign, MLA will be a stronger organization as those who seek to undermine academic freedom and the free exchange of ideas will be gone. They can take their subversive, hateful and bigoted ideology elsewhere.

Significant credit for passage of the anti-BDS resolution goes to MLA Members for Scholars Rights (MMFSR), which faced daunting odds in the face of a multi-year, well-organized boycott group.

MMFSR members argued against the academic boycott with great enthusiasm and grace at the Annual Meeting. [You may recall that my posting the audio below led MLA to get our YouTube Channel taken down with frivolous copyright claims. We got the Channel back after we contested the claims. MLA recently hired a new Executive Director, who hopefully will be more prudent than her predecessor.]

That debate also revealed the malicious underbelly of the boycott movement:

MMFSR members also mounted a campaign once the Resolution went to a membership vote, producing several highly educational videos, such as these:

There are many lessons from this defeat against the academic boycotters.

One lesson is persistence. The key to BDS efforts is to wear good people down. At MLA and elsewhere, the boycott push is a multi-year, ongoing effort.

Another lesson is to educate people. BDS, as all hate, prevails where propaganda is unchallenged. MMFSR members produced fact sheets and other factual information to counter the false narratives and ahistorical arguments of BDS.

A third lesson is not to be passive. Bringing the anti-BDS resolution before the MLA was a risk. It might have undercut a prime argument that academic, scholarly organizations should not take positions on political issues. But that shipped already had sailed at MLA and elsewhere. The boycotters, whose entire identities revolve around boycotting Israeli Jews, cannot let go of the issue and seek to insert it into unrelated organizations.

Congratulation to MLA, which has salvaged its integrity.

Meanwhile, the BDS supporters will probably keep saying to each other, “Next year, against Jerusalem, inshallah”