Moby’s New Video Shows Trump as a Swastika, Dying in an Explosion

Moby’s New Video Shows Trump as a Swastika, Dying in an Explosion 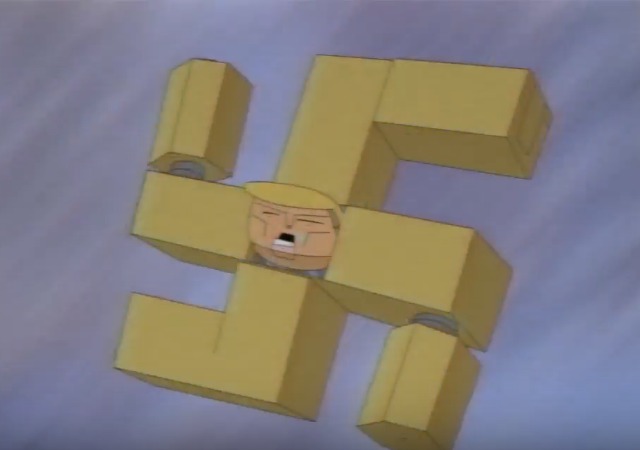 Music star Moby has decided to showcase his hatred of President Donald Trump, becoming the latest celebrity to jump on the anti-Trump bandwagon.

Moby chose to depict Trump as a Nazi leader in the video for “In This Cold Place,” who eventually meets his death as a Swastika/dollar sign in an explosion.

Moby spoke to The Huffington Post about the video, which he claimed the world will end at an any second:

That fearful idea may already be seared into his own mind, but the artist wants to make sure that you too are considering the possibility of existential demise. “We’re slowly building awareness and you just hope that the awareness comes before we end up on a planet that’s uninhabitable,” said Moby in a recent phone conversation about his new album, “More Fast Songs About the Apocalypse.”

But Moby understands that shouting “dire!” is not as newsworthy as “fire!” He expressed frustration that in the “bleeds it leads approach” to media, topical “dramatic” stories win attention over the slow killers, such as antibiotic resistance and climate change. He’s afraid the world is ending and that nobody cares to notice.

The world is going to end so why not make a video depicting the death of our president? Not like it’s a cliche or anything. (See Snoop Dogg and Kathy Griffin)

The video shows Americans as Care Bears that hate each other so they build a wall. 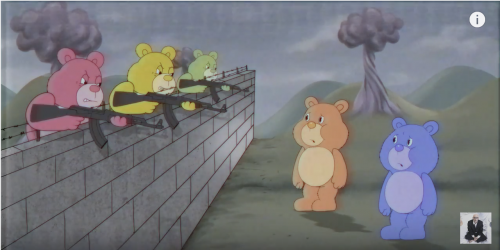 Trump is a robot that turns into a Swastika/dollar sign and destroys a city. 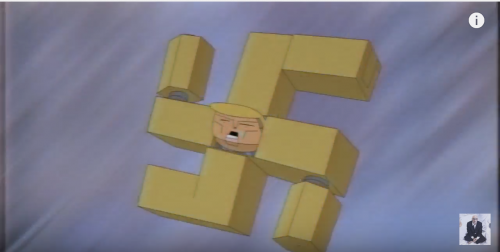 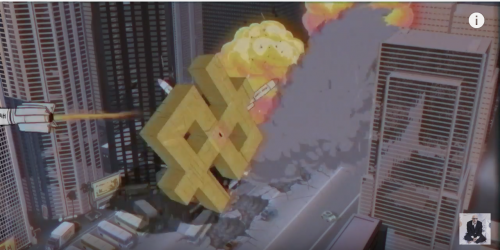 He throws in images of doom and gloom and greed as well before the Care Bears fight back and tear down the wall. Then He-Man and She-Ra destroy Trump’s friends Rupert Murdoch, Prime Minister Theresa May, Steve Bannon, and Kim Jong-un. 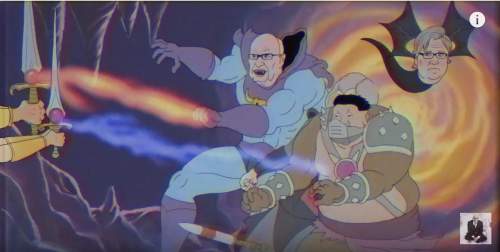 But when Trump consumes “truth” (whatever that is) he explodes and dies in a fire. 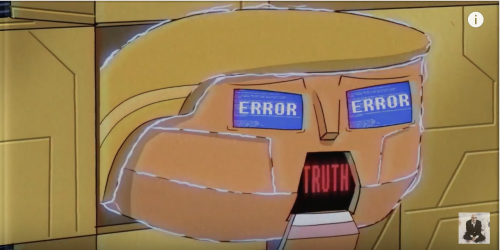 Why this he approach? He told HuffPo:

“When it comes to issues, like being a good vegan or animal rights activist, I can’t just scream,” said Moby. “You have to strategically present the information in a way that people might be receptive [and] might respond to it. That’s why I felt like doing it in a cartoonish way in the video would both sort of draw people in and repel them at the same time in equal measure.”

This is an artist who knows what he’s doing.

Or maybe it’s just another example of a tone deaf celebrity!

Trump as a Nazi. Gee, how original. Never heard that one before. Being a leftist means all thought = same. Sucks to be you, drone.

notamemberofanyorganizedpolicital in reply to Colonel Travis. | June 20, 2017 at 1:34 pm

He’s probably a very small talent – with a connection to Big PR like Grannie-Donna, and Grannie Ga-ga.

Obama as a Nazi. Let me count the ways. Gee, how original. Never heard that one before. Being a righty means all thought = same. Sucks to be you, drone.

Yeah copy paste everything else blah blah Bush-Hitler, blah blah what ever.

Anyone else notice that all the libtards shrieking about “cultural appropriation” who will squee to this didn’t have a problem with Moby’s use of samples from field recordings collected by Alan Lomax for his Play album. I guess it’s OK for an incredible white dude to use black people’s music for massive profit as long as his politics are correct and his hates are in order.

notamemberofanyorganizedpolicital in reply to DirkBelig. | June 20, 2017 at 1:35 pm

I’d love to know what Diamond and Silk would have to say on that “cultural misappropriation” without compensation…..

President Trump Retweets Diamond and Silk and The Left has a Crying Fit.

Breaking News: Hillary Is Up In The Polls. “Take A Look.”

And you really care about ‘about “cultural appropriation”’? Glad to hear it. Maybe there is hope for you after all.

BTW, show me a hypocrite on the left and I will show you one on the right. Care to play? I would start with Trump, but he can’t think, consistently, long enough to be a hypocrite. Republican House health care bill ‘mean’. Funny, because he literally celebrated it a couple of weeks ago.

Nope he is not a Nazi. He isn’t even a clown. He is a Bozo – if you understand the distinction.

I’ll just take a moment to point out that the only logical “fix” for “cultural appropriation” is for no culture to borrow anything from any other culture.

In effect: Complete and total segregation. The starving people in Africa can just hand back their well-drilling equipment and drought-resistant hybridized crops. Asians can give up electricity and running water. Native Americans can go back to a largely hunter-gatherer lifestyle.

And only the Europeans (specifically, the British) will be allowed to develop and use vaccines for the world’s deadly contagions.

Because that’s not racist or anything.

You ready to give up algebra – cause all that other stuff doesn’t happen without algebra. Algebra wasn’t invented by no white man. I guess you are going to have to go back to roman numerals.

No gun powder, either. That was invented by the Chinese.

I could go on and on with the contributions of people that weren’t ‘white’. So if you want to stay with only things invented by white people, you better go find a cave to live in.

Nice straw-man argument! It’s easy to refute the implication that white people — and only white people — would get to keep all the cool toys, or the claim that “white people” are superior.

Trouble is, I never said those things. But good effort! 😉

Now, try disproving the argument I did make: The logical conclusion to fixing “cultural appropriation” is complete and total segregation by culture, which is usually heavily dependent on race, ethnicity, and/or national origin.

Then tell me how that “solution” to “cultural appropriation” is somehow less racist and less damaging to humanity than the societal “melting pot”, or the sharing of discoveries — not to mention the refinement and improvement that comes with such sharing.

BTW, the Native Americans would be happy to go back to hunter-gather just as soon as the Europeans go back to Europe.

And no ‘Jewish Science’ for you either. Without Einstein there is no GPS. Without Jews the atomic bomb would have come too late and all the ‘Europeans’ would have annihilated each other.

When it comes to history, you are just plain ignorant. Do u actually believe that the ‘white race’ is superior? Pathetic.

I have never heard of Moby, for which I am grateful.

“Why this he approach”? Mary! I seriously hope you typed this on your phone and are a victim of autocorrect.

What the hell is a Moby?

Richard Melville Hall is a person… that I don’t really care much about. He is an American DJ, record producer, singer, songwriter, musician, photographer and animal rights activist.

He is all those things, which I’m OK with.

What I’m not OK with, is him being all those things AT you.

Wow. This deserves a “I know you are, but what am I” response.

So … not a vegan or animal rights activist, so he must be a Nazi. Got it.

So glad we could clear that up.

I stopped worrying about the views of music and movie celebrities a long time ago.

But, I have to ask, do they still have videos on MTV ?

“When it comes to issues, like being a good vegan or animal rights activist, I can’t just scream,” said Moby.

Sooo… Trump is a Nazi, because vegan and animal rights?

Surrealism at its finest here, folks!

To think, once upon a time I liked his music. Even back then, his moonbat-hippie politics were a bit much for me.
——
Dear Moby,

So you “can’t just scream”? Fine. Do what you did when you released Play and publish a handful of essays in the liner notes, for all the three people on Earth who cared enough to read them after caring enough to buy the CD.

Understand: The people you are trying to reach with your activism don’t buy music; they “share” (read: pirate) it with their friends, who got it who-knows-where. The people who buy music (read: pay your bills) don’t care about your activism. You can be a liberal “Progressive” and that’s fine with them, but if you insist on being a liberal “Progressive” AT them, they won’t buy (read: pay your bills) any more.

That’s not a threat; just a simple fact. You’re not “firing people up”, you’re turning them off.

You know, these people actually helped pajama boy lose in Georgia. They are the gift that keeps on giving.

The left has blown its wad. They just keep digging their hole deeper.

Got me wondering. Who did everyone compare Hitler to to insult him and his followers? Was there a Hitler-“?” movement?

Interesting, the city looks like Detroit. In the begining of the video it’s Detroit when the auto industry was booming and then we get to see it when the plants shut down at the end. The main character is an electronic zombie who only cares about unplugging from the real world. Don’t really see that he has a job so mayube this is an idictment of the welfare class not taking charge?