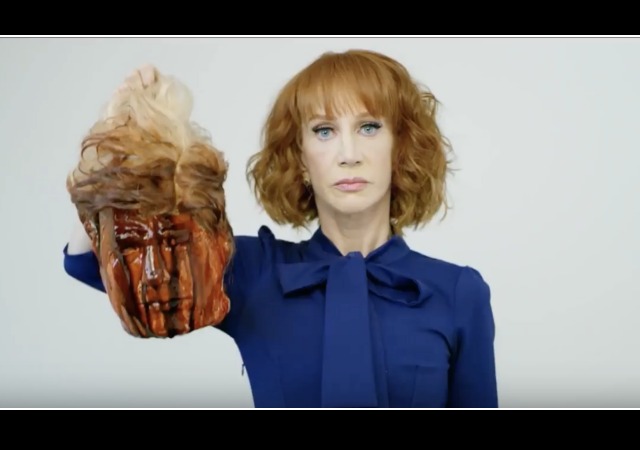 No one knows hypocrisy more than the left.

The latest example appeared in a photoshoot with “comedian” Kathy Griffin by photographer Tyler Shields, which has her holding the bloody severed head of President Donald Trump.

According to TMZ, Griffin told Shields that the two of them may have “to move to Mexico once the pics got released, for fear they’d be thrown in prison.”

Will Twitter suspend Kathy Griffin after sharing a video of her beheading the president? https://t.co/nxPnQTZENs

Of course people have lashed out at the picture on social media:

Watch the left pretend like this Kathy Griffin thing is about "right wing snowflakes" rather than their own abysmal double standards.

So, is CNN going to have Kathy Griffin host New Year's again? https://t.co/AZwANHL4Ti

If you're CNN, you announce immediately that Kathy Griffin will no longer be hosting your New Year's Eve special right now w/o hesitation. https://t.co/1wb4VAz9sj

Remember, it’s okay to do this only with a Republican president. In 2013, the left lost its mind when a rodeo clown wore an Obama mask. The Missouri State Fair banned the rodeo clown for the life. Missouri Rodeo Cowboy Association President Mark Ficken resigned.

The fair has now required all future rodeo cowboys or clowns to participate in sensitivity training.

Philip Rucker said the incident reminds us all of the “continued racial divide” in this country.”

Weird, though, I don’t remember a peep out of the left when Game of Thrones had a Bush mask on a spike in season one. Showrunners David Benioff and D.B. Weiss admitted “Bush’s head appears in a couple of beheading scenes,” but claimed they did not use it as a “political statement.”

In 2009, David Letterman joked that during a visit to New York City, Alex Rodriguez knocked up Sarah Palin’s daughter. Yeah, um, her then 14-year-old daughter Willow attended the New York Yankees game, not her then 18-year-old sister Bristol, who just gave birth to a son.

I could go on and on, but I don’t have time to write a novel. I know that this gives Griffin the attention she longs for, but we have to call out their hypocrisy every chance we can. We should not have to live up to different standards than the left.

I certainly hope Ms Griffin Mr. Shields have a long and productive discussion with the Secret Service in the near future.

notamemberofanyorganizedpolicital in reply to georgfelis. | May 30, 2017 at 6:13 pm

Heck! What else does a 17th rate ham got to do with his time.

What???? You mean Griffin claims to have women parts????

Griffin, ask not at whom John Sununu laughs. He laughs at you too for the same reason as below.

“This interview is really quite funny. Former Governor John Sununu, a vocal 2016 critic of the Trump campaign for the presidency, appears on CNN and completely takes apart the nothingburger narrative surrounding the ‘Vast-Russian-Conspiracy’ theory….

snopercod in reply to notamemberofanyorganizedpolicital. | May 30, 2017 at 8:25 pm

Somebody post the photo of Griffin’s “mud flaps”! Oh, here they are: http://althouse.blogspot.com/2010/12/kathy-griffin-joked-that-bristol-palin.html

Ageing comedienne needs attention. Some like her on the Left may soon get some very suddenly.

notamemberofanyorganizedpolicital in reply to Whitewall. | May 30, 2017 at 6:15 pm

She can’t even make it as a “Fag Hag” anymore. They’ve throw her over.

She’s just a stupid whoer who would lift her skirts for a one-time shot on “Good Morning, Des Moines” following the futures report.

She’s been paid well for being so trite and predictable with her humor. This may be her attempt to get more front page publicity, though.

Does she represent the Left? She does her part as all leftists do until they are discarded for the bigger game:
https://www.campusreform.org/?ID=9231

In the quest for fame and fortune, it’s a lot easier if you get the fame part first. But what is someone like her going to do to get it? She’s far to old to get famous by, say, doing “edgy” stuff like dropping her pants in public. But here’s a safe & sure bandwagon she can jump on; maybe it will carry her straight to the headlines. And so it has.

What does she have to lose? The days of gross Presidential lawlessness ended when Obama left the White House, so there’s no danger of Trump doing anything “presidential” to her. Assuming he even cares. Unlike most of us, he’s had a lifetime of practice in dealing with the greedy and resentful. I doubt he takes it terribly personally by now.

Kathy Griffin; role model to my daughter of what not to be when she grows up.

Next week she’ll do something really original like make fun of Christians for opposing same sex marriage.

Progressive liberals (e.g. “=”) may (according to the political winds) oppose marriage in multiplicity, marriage of adolescent and prepubescent boys and girls, and marriage between members of different species.

How long before someone Photoshops Obama’s head in place of Trump? Oh, but that’s different!

Give her a break. When you are some D List funny lady who hasn’t been funny in years, you have to go edgy in the hopes that the cool A Listers will throw you a bone …

What is the difference between her and all of the hags at cnn and msnbc who say things every day that are not true. Or the late night comedians who trash Trump nightly? They are all doing it for a boost in their pathetic ratings. We live in a world with two sets of rules. We all know it and there is no reason to complain. But body slamming is a start!

Does she realize Trump has to wear a bullet proof vest in public, doesn’t she?

Prison seems a bit much, but being fired from each and every job she has, starting with CNN, seems only fair.

She’s just getting ready for her new gig with ISIS in the rolling dunes of Syria, trying out a couple of new sketches. I’m glad to see her show the rest of the world what the death cult likes to do to it’s enemies.

I don’t believe this is going to play well in the 2018 midterms. Republicans look incompetent while democrats are looking dangerous and out of control. It seems that neither party wants to govern. If the choice is between the two parties, which one is hated more by voters? The dumb party or the insane party.

I didn’t even know that Carrot Top was still a thing. He’s aged poorly.

Who grows weary of these intellectual poseurs? I hope the SS makes her life very miserable.

The religion of secular leftism is a powerful force. That is unfortunate, because it lacks civility and rejects any intellectual arguments. We are heading into Pol Pot Year Zero territory with these idiots.

And it is a religion, even though the ardent believers of this heresy don’t see it that way.

Many, many surgeries later…still ugly like a long stemmed red mushroom.

Turnabout is fair play. Let’s have a contest to see who can post the grossest beheaded Kathy Griffith pictures.

This may be one big misunderstanding. Looks to me like she’s crying out for head.

It’s not like in the heat of the moment she told an inappropriate joke (she’s never actually been funny) on a stage and now needs to walk it back. She acquired or designed the head and held in front of cameras knowing that it would reside on the internets forever. While it doesn’t offend me, I want her held the standard of common decency.

She deserves a nice vacation in Raqah.

Frankly, the head on the right scares me (an doubtless, Baron Trump) far more than the fake Trump head….

Way to end a career, dumbass….