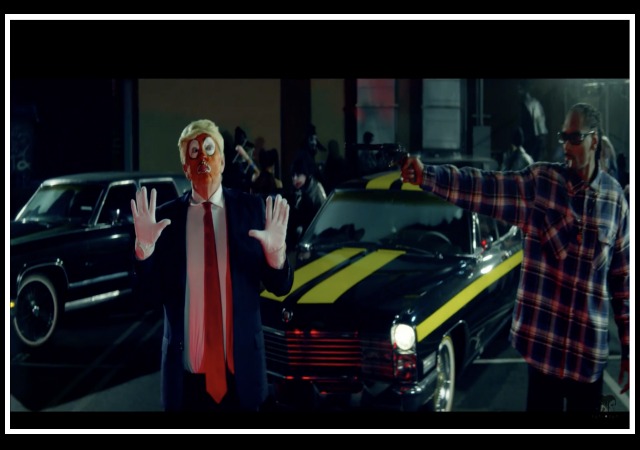 In his latest video, rapper Snoop Dogg shoots a clown dressed as President Donald Trump. From The Hill:

The track, which focuses on police brutality, shows a world inhabited by clowns.

Snoop Dogg says, “This is the final call,” before pointing a gun to the head of a cigarette-puffing clown dressed as Trump. After pulling the trigger, a “bang” flag shoots out from the music star’s gun.
“The whole world is clownin’ around,” Snoop Dogg told Billboard in an interview about the video published Sunday, saying, “if you really look at some of these motherf–kers, they are clowns.”

The 45-year-old rapper, who endorsed Democratic presidential nominee Hillary Clinton in last year’s White House race, slammed Trump: “The ban that this motherf–ker tried to put up; him winning the presidency; police being able to kill motherf–kers and get away with it; people being in jail for weed for 20, 30 years and motherf–kers that’s not black on the streets making money off of it — but if you got color or ethnicity connected to your name, you’ve been wrongfully accused or locked up for it, and then you watching people not of color position themselves to get millions and billions off of it.”

“It’s a lot of clown shit going on,” Snoop Dogg said, “that we could just sit and talk on the phone all day about, but it’s a few issues that we really wanted to lock into [for the video] like police, the president and just life in general.”

“When I be putting shit out, I don’t ever expect or look for a reaction,” Snoop Dogg said of the video, directed by YouTube star Jesse Wellens. “I just put it out because I feel like it’s something that’s missing. Any time I drop something, I’m trying to fill in a void.”

“I feel like it’s a lot of people making cool records, having fun, partying, but nobody’s dealing with the real issue with this f–king clown as president, and the shit that we dealing with out here, so I wanted to take time out to push pause on a party record and make one of these records for the time being.”