My column in The Detroit News how Rasmea’s plea agreement exposed her lies and those of her supporters. 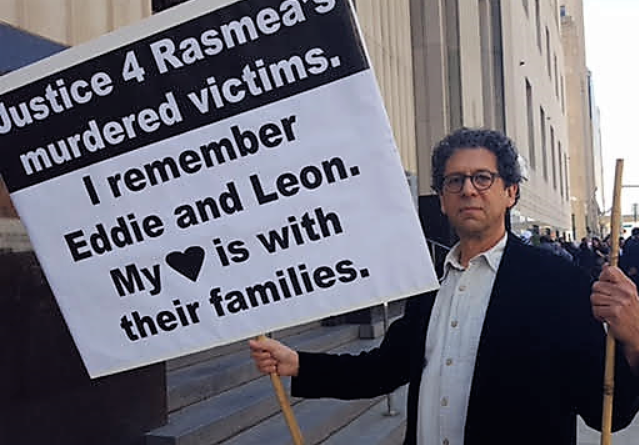 You may recall Rasmea Odeh, who recently pled guilty to one count of obtaining naturalization unlawfully based on her non-disclosure on immigration forms of her conviction and imprisonment in Israel for the 1969 supermarket bombing that killed Hebrew University students Edward Joffe and Leon Kanner. She also was convicted of attempting to bomb the British consulate.

The issue in the immigration fraud case was that Rasmea claimed she falsely answered immigration questions because she suffered from PTSD as a result of alleged Israeli torture to coerce her confession. We have demonstrated how that story is contradicted by objective evidence.

Nonetheless, Rasmea has become a hero to the anti-Israel movement based on that PTSD story. But in her plea agreement, she admitted the PTSD defense was false, and that she knowingly answered the questions falsely, and not due to PTSD or any other mental condition. The brother of Edward Joffe described the significance of that plea provision, VIDEO: Terror victim’s brother says Rasmea Odeh supporters “have to eat their words”:

Nonetheless, the myth of Rasmea the victim continues. Her supporters still celebrate Rasmea, even though their supposed reason for supporting her has disappeared with her acknowledgement in the plea agreement that the PTSD defense was phony.

I have a column in The Detroit News about the case, Justice for Rasmea. 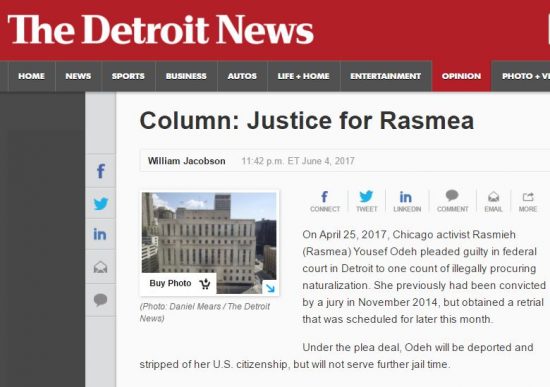 Odeh’s profile as the victim of sexual torture suffering from PTSD who vindictively was being prosecuted by Zionists helped boost Odeh’s activist profile. Odeh became involved with the Black Lives Matter movement, and even was honored at the 2017 annual meeting in Chicago of the anti-Israel Jewish Voice for Peace. “Justice for Rasmea” has been the rallying cry.

Despite exposure of Odeh’s lies, the groups supporting her continue to portray Odeh as a victim.

In reality, there are only two victims, Edward Joffe and Leon Kanner, the two Hebrew University students killed in the 1969 supermarket bombing.

After formal sentencing in August, Rasmea Odeh will be deported and lose her U.S. citizenship. That’s justice for Rasmea.

I provide more explanation of the dishonest nature of Rasmea’s support in this video:

Anyone who bothered to do any even cursory research into the Rasmea Odious story would immediately discover her many lies, starting with her original confession, which she gave within 24 hours of her arrest, not after “25 days of sexual torture”! Everything she claimed was a lie and, her bamboozled sycophants notwithstanding, she never deserved to be allowed into this country at all. Her deportation is a victory for truth and justice.

She only got deported. Her victims have been dead all this time.

Of course it didn’t work.

Why do you do her the courtesy of referring to her by her first name like we’re all buds. It really offends me.

It seems to be the trend these days to refer to deranged people in public life by their first names: Saddam, Hillary, Barack, Madonna, Cher, Jesse, and so forth.

It’s an American thing. Our British cousins are still bemused…

Of course her story was ridiculous, but I don’t see how her confession destroys it; she was required to make it as part of her plea bargain, and everyone knows that such allocutions are often blatant lies. Defendants pleading guilty say what the lawyers tell them to say, and are often explicitly instructed to answer the judge’s questions falsely, because if they don’t then the deal is off and they’ll face the prospect of a much harsher sentence if convicted. So her defenders can say that’s what happened here; they can continue to insist her original story was true and her admission is the lie. Anyone stupid enough to believe her in the first place would surely find this easy to believe.