“When she’s deported and stripped of her citizenship, I think Justice will have been done for Rasmea.” 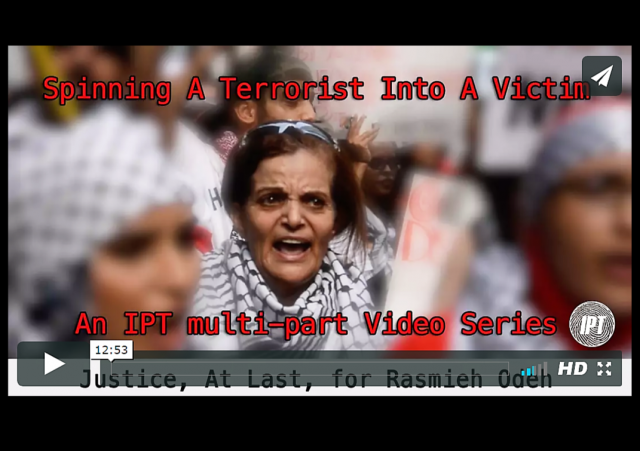 As you may be aware, Rasmieh (Rasmea) Odeh pleaded guilty on April 25, 2017 to one count of unlawfully obtaining naturalization. In the plea agreement, Rasmea admitted she knowingly had lied, among other ways, by denying ever having been convicted or imprisoned.

In fact, Rasmea was convicted in Israel in 1970 of the bombing of the Supersol supermarket, which killed Hebrew University students Edward Joffe and Leon Kanner. She served 10 years before being released in a prisoner exchange.

Rasmea concocted a defense that she falsely answered the questions because she was suffering from PTSD, which made her “filter” the plain wording. At multiple levels that defense was as big a lie as her lies on her immigration forms, and in the plea agreement she admitted her false statements were not the result of PTSD or any other mental condition.

But if you need a refresher on the case, and Rasmea’s other nonsense claims, see our coverage of the guilty plea, Rasmea Odeh pleads guilty to immigration fraud, and follow up post, VIDEO: Terror victim’s brother says Rasmea Odeh supporters “have to eat their words”.

The Investigative Project on Terrorism was on the Rasmea Odeh case even before we were. IPT has just released a video about the guilty plea, Spinning a Terrorist into a Victim: Justice, At Last, for Rasmieh Odeh:

Rasmieh Odeh’s April 25 guilty plea to naturalization fraud contained clear-cut admissions, including that she knowingly lied to U.S. immigration officials to hide her terrorist past. As this report shows, however, Odeh is selling a dramatically different story in public, one her supporters blindly follow.

For more details about Odeh’s case – the charges against her and her terrorist past – see our 2014 series, “Spinning a Terrorist Into a Victim.”

The video does a good job at demonstrating the pathology behind Rasmea’s conduct, where even after pleading guilty, she still portrayed herself as the victim: 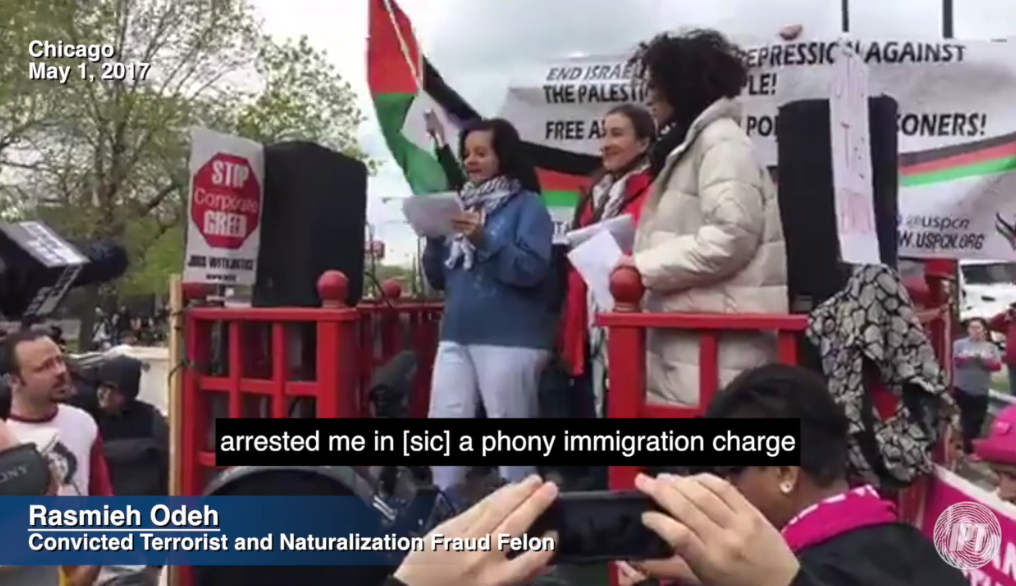 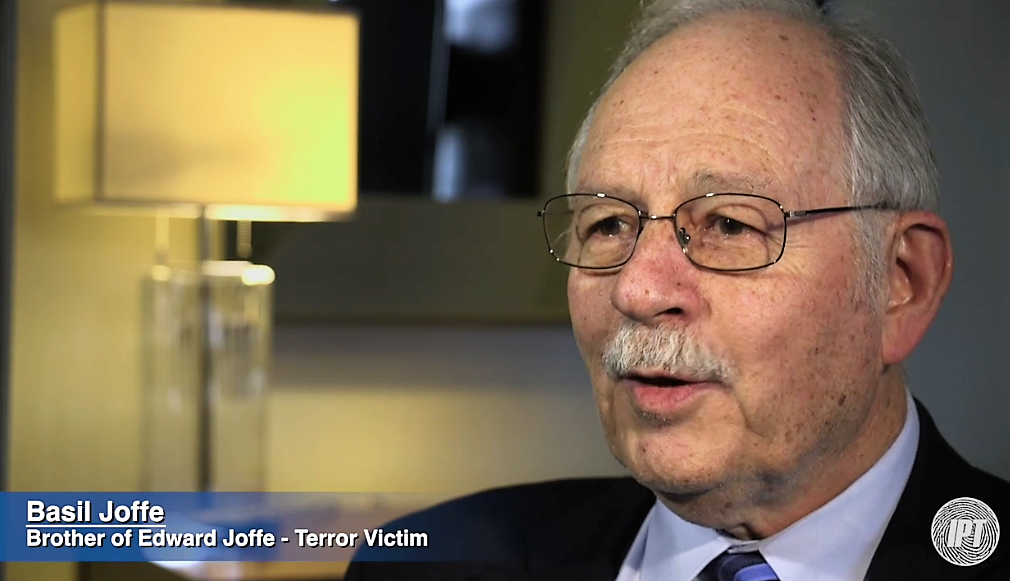 “This is their star, their rock star, their idol, and it’s a very cult-like atmosphere there.”

My guess is that her emotions probably were real, but they were not necessarily motivated by what you might think. I think she legitimately is upset that she’s going to have to leave the United States, that the fruit of the lies on her immigration forms is being taken away from her, her U.S. citizenship. So I believe she really is upset. But just because she’s upset doesn’t mean she’s been wronged. She committed a wrong.”

This is not a case about racism. This is not a case against anti-Palestinian government action.  She lied to get into the country. And it was the worst type of lie. It was a lie about prior terrorist activity. This was not an innocent lie. This was a lie went to the heart of the screening that takes place to keep terrorists out of the United States.  Rather than acknowledging what she did, and acknowledging how she lied to come into the country, she presents herself as the victim. And that is very typical.”

I really did not expect this to happen because her lawyers and her defense committee and her supporters have been bragging for months how she’s going to put Israel on trial. So I thought, given her background, that would be one of her life goals, to try to put Israel on trial in a U.S. courtroom.”

“The Twitter hashtag that Rasmea’s supporters use is #Justice4Rasmea. When she’s deported and stripped of her citizenship, I think Justice will have been done for Rasmea.” 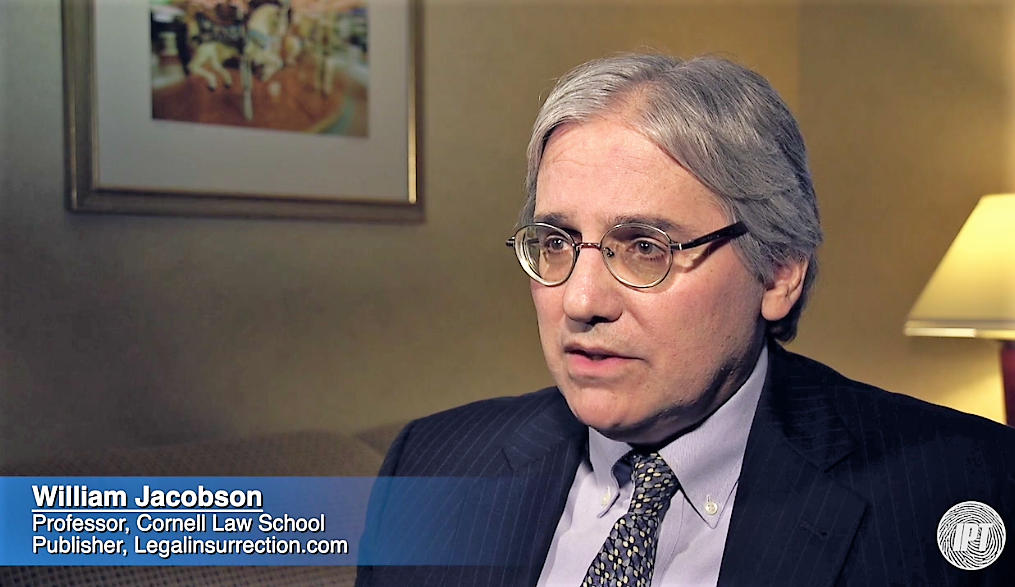 Legal Insurrection reader Dan Cutler, who stood outside the courthouse with a sign remembering Edward and Leon, also is in the film. 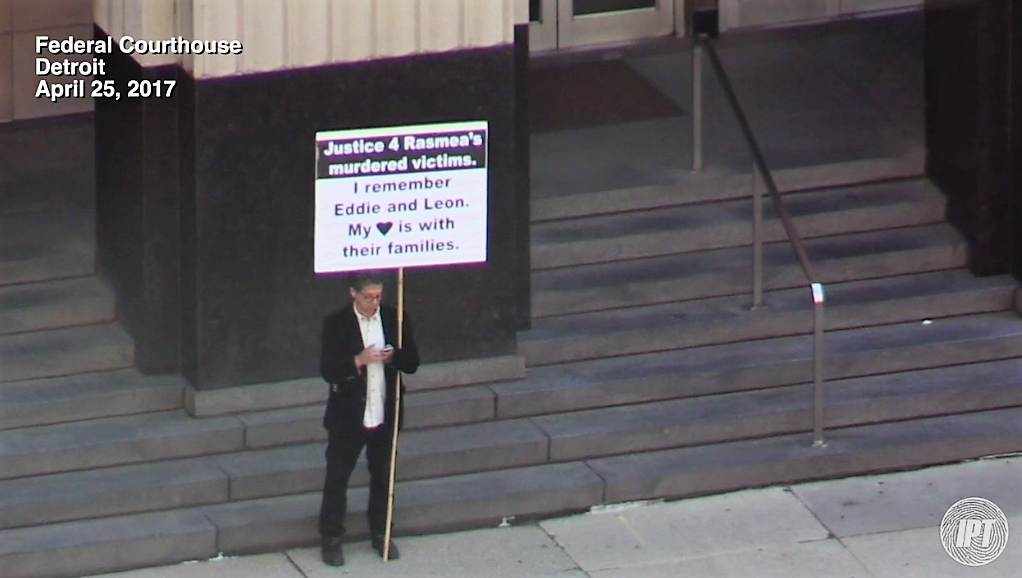 I think we should just open the cargo doors over mid Atlantic and let her go free.

She is not getting what she deserves, she is living and free.

Hell is waiting for her.

Hell on earth is always better.

Right. What she deserves is a lifetime in prison or the electric chair, but at least we got her out of the country. It will be interesting to see where she ends up.

Justice for Odeh will be when Mossad terminates her – with extreme prejudice, of course.

Oh, believe me if Mossad had decided to take her out it would have been done already, they don’t tend to screw around.

Mossad doesn’t act lawlessly despite what Isreal’s detractors would have you believe. Waiting patiently for the US justice system to grind out a decision is precisely what I’d expect from the Israelis.

What they do now that Odeh is walking free is up to them.

I disagree that it’s justice and enough punishment.. Either a Death sentence or Death by slow torture would be fitting justice/punishment.

I could swear she said “I want to live!” (Did I hear that correctly?) But the two students she murdered–
well, they’re “just Zionists”, no big deal. /s

They say that by the time you rurn 50 you have the face you deserve.

Whoo, boy have you taken a look at that gargoyle?