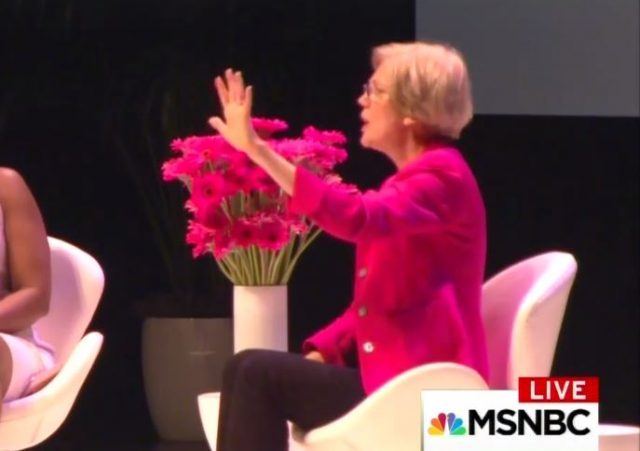 Put this one in your political time capsule. On her MSNBC show this morning, Joy Reid played a clip of her recently asking Elizabeth Warren if she was “going to run” for president in 2020.  Her response is interesting, to say the least.

What makes it significant is that Warren did not resort to the classic dodge of saying “I am not running,” a meaningless non-answer for anyone who has not yet thrown his hat into the ring. The question was whether she was “going” to run, and Warren’s “no” would, as a matter of logic, indicate that she has ruled out a run.

And yet . . . Warren immediately went on to add: “hold on, hold on, hold on. So, I want to be really clear about this. I am running for Senate in 2018. Go Massachusetts! I announced early. I did not want anybody to doubt whether or not I’m in this fight. But I really want to be very clear to everybody in this room: politics cannot be just what happens every four years.”

That additional verbiage wouldn’t seem to negate her “no,” but does anyone doubt that if Warren does decide to run, she’d say something like “what I meant was that I was focused on my Senate race, and wouldn’t consider a presidential run until the Senate race was over?”

Reid was skeptical on the one hand, saying, “I never believe politicians [who say they’re] not running for president,” but then added, “but she gave the Shermanesque ‘no,’ not going to run.”

Not quite. Wiliam Tecumseh Sherman, the Union general, in response to the prospect of being offered the Republican nomination for president. said: “I will not accept if nominated and will not serve if elected.”

In any case, tuck this one away for future reference. It will be a gauge of Warren’s honesty if she does decide to run.

Note Warren’s use of the phrase “this fight” in her explanation of why she made an early announcement of her 2018 Senate run. “This fight” just happen to be the first two words of the title of her latest book.  Nice tie-in marketing work, Senator!

JOY REID: During my interview with Senator Elizabeth Warren, I asked the question we’ve all been wondering: “I cannot be on the stage and not ask you this question. Are you going to run for president?” Gotta ask!

REID: You’re a well-known, nationally-known figure. You’re somebody with some governmental experience. You’re popular with both factions of the party, the Bernie faction as well as the Hillary Clinton faction. Are you going to run?

ELIZABETH WARREN: No. Um, so, now hold on, hold on, hold on. So, I want to be really clear about this. I am running for Senate in 2018. Go Massachusetts! I announced early. I did not want anybody to doubt whether or not I’m in this fight. But I really want to be very clear to everybody in this room: politics cannot be just what happens every four years.

REID: Joining me now is Krystal Ball, senior fellow at the New Leaders Council. Former DNC Chair Howard Dean, and Democratic strategist Karine Jean-Pierre. Oh, this is going to be fun. I’m going to start with you Krystal, and put you in the hot seat first.

I asked Elizabeth Warren if she’s running. I never believe politicians who [make believe?] they’re not running for president, but she gave the Shermanesque no: not going to run, and she made an important point, that we can’t just be focused on who’s running for president. Democrats and Republicans alike need to focus on the mid-terms, too.

I think that electing a Native American woman as president is way past due. Where can we find one?

Of course Fauxcahontas will run – how else will she get any new money and attention?

But she’s also writing the script of excuses why she lost.

She and clinton should just collaborate at this point, and save a lot of energy – and mitigate global warming in the process.

notamemberofanyorganizedpolicital in reply to TheFineReport.com. | June 5, 2017 at 4:34 pm

Lizzie is so hard Not Running, that her cheeks are clapping like thunder – all four of them!

What about Chief of the Cherokee Nation?

Haven’t the Cherokee named her Crazy Talk? I thought I read than somewhere. Maybe not.

She is known as Shrieking Crow.

This woman lied in writing for financial gain.

The Democratic Party will sojourn in the wilderness until it cleans house at the national level.

This is not a new condition for the Democrats. You have to go back to Humphrey in ’68 to name the last truly honest and honorable nominee for president for the Democrats. So it doesn’t seem to be an impediment to them. They’re right where they’ve always been: One charismatic empty suit away from power.

And, IMHO it’s Oprah’s for the taking, at least the nomination for the Democrats in 2020. Whether she can beat Trump, I don’t know.

I’ll give George McGovern credit: while he was a looney lefty and completely unsuited to be President, he flew a B-24 in WWII. Any man who did that has my basic respect.

And after retiring from the Senate, he learned first hand about taxes and regulation when he tried to run a small bed-and-breakfast — and went bankrupt. And he admitted afterwards that he had had no idea how hard it was for small business.

I hope Schilling cleans her clock

It will be a gauge of Warren’s honesty

That bus left the station years ago, and even the Democrats know it.

Yes. The words ‘democrat’ and ‘honesty’ in the same sentence is rather comical. Same for ‘GOPe.’

Everything she has done to date has been false, so if she told the truth this time, it will have been the first.

Still waiting to hear from the American Indians who got ripped off for their opportunity for an education because Warren lied about being an Indian and getting their admission and th3eir scholarship and their resulting opportunities instead.

This scummy woman is akin to the gift to conservatives that hillary clinton has been.