Human shields are an integral part of Hamas strategy, one largely ignored by the media. 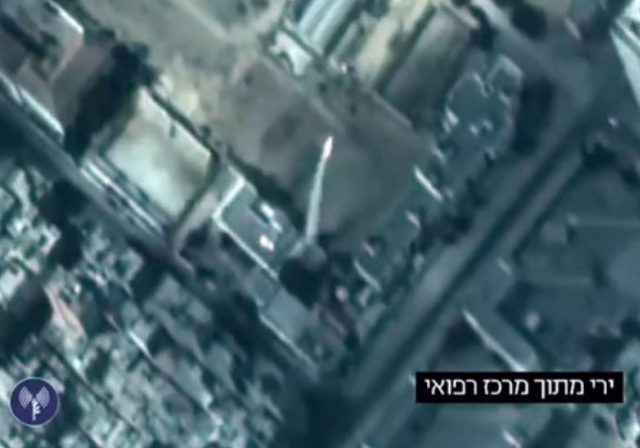 In retaliating, Israel faced a dilemma — Hamas used the Gaza civilian population as human shields. Hamas also intimidated journalist into trying to cover up this human shield strategy so that the media focused primarily on the civilians killed or injured when Israel attacked rocket launch sites.

And it worked. Civilian casualties (which were exaggerated by Hamas-controlled Gaza health authorities) created a media and international firestorm meant to limit Israel’s ability to defend itself.

But over time, the truth came out about how Hamas used even hospitals as firing positions, Hamas hides in, under and around Gaza’s main hospital, and the media covers it up (Video):

There have been reports for years that Hamas uses the main hospital in Gaza, Al-Shifa, as a headquarters.

It reportedly has bunkers underneath, and uses the hospital itself.

There have been tidbits of media reporting on Hamas’ use of Al-Shifa as a de facto headquarters for Hamas leaders, who can be seen in the hallways and offices.

But mostly it has been covered up by reporters in Gaza, as I detailed in Media cover-up of Hamas crimes starting to unravel. Tweets have been deleted and articles taken down by reporters for major publications.

One Italian reporter who left Gaza blew the whistle on the fact that it was Hamas or Islamic Jihad misfired rockets that cause a large number of deaths in a refugee camps. The victims were transported to Al-Shifa, where another rocket had already hit. A Wall Street Journal reporter tweeted, then deleted, his observation that it was a Hamas rocket that hit the hospital….

But one brave Finnish reporter told it as it was, exposing how rockets are fired from close to al-Shifa:

Al-Wafa hospital, which was at the border, also was used as a shooting position:

For example, between July 11 and July 23, Hamas militants repeatedly fired at IDF forces from, and set up military surveillance devices within, the Al-Wafa hospital compound. In response to the shooting, which posed a serious and immediate threat, the IDF returned fire in a precise and discriminating manner that did not cause any harm to civilians. That response was permissible under the Law of Armed Conflict. The IDF repeatedly warned official entities in the Gaza Strip, as well as the Palestinian Authority and international organisations, that military use of the hospital must stop. On July 23, after these warnings went unheeded and militants again fired at IDF forces from the hospital compound — and after confirming multiple times that staff members and other civilians were no longer present and that the hospital was not being used for civilian purposes — the IDF attacked the site.

Anti-Israel activists like Joe Catron of the International Solidarity Movement, used themselves as human shields at al-Wafa hospital. Robert Mackey, then of the NY Times now with the Intercept, relied on such human shield activists in his reporting.

Of course, hospitals and medical facilities were not the only civilian shields for Hamas, they also used apartment buildings, as this report from an Indian news crew revealed after they left Gaza and were safe to report, Watch Hamas set up and fire rocket next to residential buildings:

Schools also were used as shields. Indeed, a UN Agency recently complained that Hamas had built tunnels under a school.

Now we have even more proof of how Hamas used medical facilities as shields for rocket fire. The report comes from the Red Crescent, via a United Arab Emirates newspaper, Red Crescent chief tells of Hamas betrayal while delivering aid in Gaza: 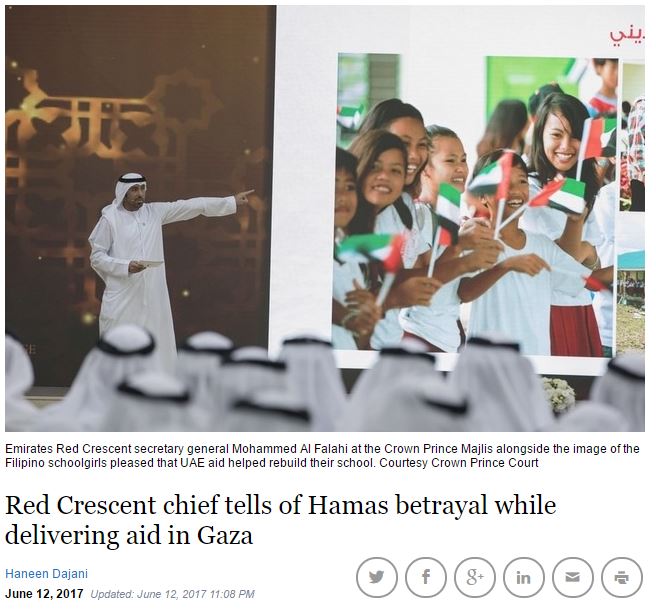 ABU DHABI // Emirates Red Crescent staff came under attack from Israel in response to Hamas fire from a Gaza hospital where they were working, the charity’s secretary general said at the Crown Prince’s Majlis on Monday night.

Mohammed Al Falahi said his organisation felt sacrificed after Hamas, which controls the Gaza Strip, fired on Israelis from the field hospital bringing retaliation from the Israelis.

Mr Al Falahi said the charity had coordinated with the Red Cross to distribute aid in Gaza during the 2014 conflict “and we asked them to liaise with the Israeli forces so they don’t strike us”.

“While we were in the field hospital that the UAE built, we were surprised by – and this is the first that we have announced this – someone from Hamas instigating Israeli forces by launching locally made rockets from the field hospital”, he said.

Inevitably, the Israelis hit back. “This shows their [Hamas’s] wicked intentions and how they sacrificed us,” Mr Al Falahi said. “They always claim that the enemy targets humanitarian envoys but the betrayal came from them.”

Why the disclosure now?

Likely it’s related to the political fight the UAE, Saudi Arabia and others are having with Qatar and Hamas.

Politics aside, this Red Crescent disclosure is completely consistent with everything we previously have learned and confirmed about how Hamas used civilians as human shields, including using hospitals as firing positions.

[Featured Image: Rocket launched from roof of hospital via YouTube]

Hamas,and other terrorists have to operate like this. If they tried to fight a conventional conflict, they would lose quickly. Underhanded tactics work when allowed to by the opposition.

Although I suppose it’s way too expensive, given the ease of tunneling through that sandy soil, I think it’d be a wonderful turnaround if Israel would go, say 100 feet down and tunnel to within a few yards of those bunkers under the hospital. (yes, it’s miles, but Hamas built very long tunnels with far less resources)

Leave the last bit uncompleted until the next war breaks out, and then let a top commando squad break into Hamas HQ from underneath at the peak of the battle. Difficult, would take a lot of preparation and planning, and it would be expensive.

Tom, along the lines you are thinking…..hmmmm….perhaps Israel should start a “FRACKING FOR PEACE” program, like the oil companies have……..