California signs its own “climate accord” with China

California signs its own “climate accord” with China 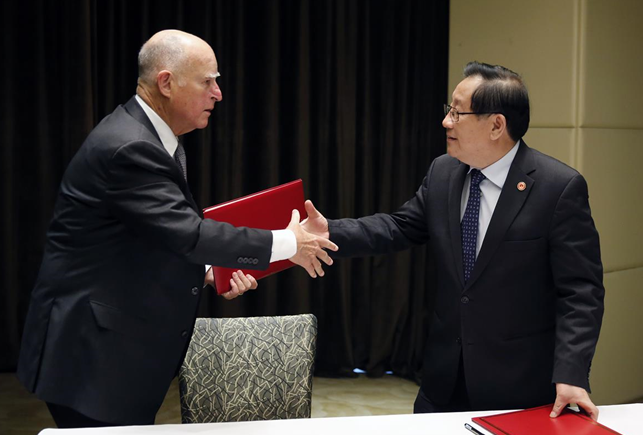 Now the California’s Russia-connected secession movement is stalled, China is stepping in to deepen the rift between the Golden State and the rest of the Union.

After President Donald Trump withdrew from the Paris Climate Accord, Governor Jerry Brown suffered a massive attack of hyperbole during a PBS interview and deemed the action “insane.”

Then Brown went to China and  signed a climate change accord with the nation (for those of you interested in how constitutional this act is, here is a great discussion of State Treaties).

The agreement, though nonbinding, aims to expand cooperation between China and California on renewable energy, zero-emission vehicles and low-carbon urban development, Brown’s office said. It will establish a joint working group of Chinese and Californian officials to come up with ways to work together, and to invest in programs that would cut carbon emissions.

Brown signed the pact with Wan Gang, China’s minister of science and technology, before meeting with Chinese President Xi Jinping.

“California is the leading economic state in America and we are also the pioneering state on clean technology, cap and trade, electric vehicles and batteries, but we can’t do it alone,” Brown said Tuesday. “We need a very close partnership with China, with your businesses, with your provinces, with your universities.”

Brown is in the middle of a weeklong trip to China, where he has signed similar agreements with leaders from Sichuan and Jiangsu provinces. Brown will headline the Under2 Clean Energy Forum on Wednesday in Beijing, a gathering of 170 cities, states and nations working to keep the global average temperature increase under two degrees Celsius.

Actually, it turns out that California is no longer the “leading economic state.” Per a 2016 analysis assessing various economic factors, Washington now has that distinction. But facts never did get in the way of Brown’s spin.

California is #10…for the time being.

It turns out that the trip to China is quite the junket! Over 30 Bay Area business leaders paid thousands of dollars to join the California Governor.

The business delegation is led by the Bay Area Council business advocacy organization and includes executives at transportation and energy companies, public utility leaders, academics, investors and a top executive of the San Francisco International Airport.

Most paid a fee of about $5,500 on top of their travel costs to attend four days of events, including multiple private dinners and receptions with Brown, a clean energy ministerial and meetings with Chinese business and political leaders.

Brown’s office declined to provide an estimate on the trip cost’s for him and staff members being paid for by a nonprofit group that takes private donations.

“The purpose of this is really to enable California to play a global role on an issue that’s of huge global consequence,” said Jim Wunderman, president of the Bay Area Council, which helps run California’s trade office in China. “The governor showed a lot of appreciation about having fellow Californians take the time to go to China just for a few days.”

I will simply point out, again, that the policies promoted by the Bay Area have been toxic to much of the rest of the state.

Meanwhile, reports coming from the California-China summit are highlighting China’s steps to address its environmental footprint in the last few years and their statements that the government will $360 billion on green energy projects.

However, in the Washington Examiner, columnist Tom Rogan looks at the Paris Accord and points out that the better bet is fracking rather than “green energy” for the long-term health of both the American environment and the economy.

How about China, which will now seek to displace America as Europe’s closest ally? Again, the story is familiar. While China’s leaders talk a good game, the data suggests they have little interest in following through. As the left-leaning Centre for International Climate Research noted in March, China’s carbon reduction strategy is “nowhere near consistent with the overarching ambitions of the Paris Agreement.”

Paris-accord sympathizers disagree. They cite China’s reduced coal usage as evidence of its seriousness about the process. Unfortunately, their assumption rests on the reliability of Chinese government data. As Michael Lelyveld explains, China’s national bureau of statistics is a very creative number factory, which is to say it makes up numbers.

If America is serious about reducing carbon emissions while also protecting consumers and the economy, its leaders must heed the data. And the data proves that the U.S. energy market offers a pathway to a cleaner future.

The Paris agreement, in contrast, is a non-binding fiction.

The California-China climate agreement is equally non-binding.  I suspect that the Chinese will treat the agreement with the same degree of respect and seriousness it did with the Paris Accord.

In his stubborn quest to #Resist Trump, Brown has bound the citizens of California to senseless and economy-crushing rules with a partner that is less than reliable on this issues.

In the text of three Constitution, Article 1, Section 10 *begins with* “No State shall enter into any Treaty, Alliance, or Confederation”

In which case then California is fine since its an Accord 🙂

Q: If you call a tail a leg, how many legs does a dog have?
A: Four, because calling it a leg does not make it one.
— (Attributed to Abraham Lincoln)

notamemberofanyorganizedpolicital in reply to georgfelis. | June 8, 2017 at 12:25 pm

Well we have people with penises who call themselves girls and win girl’s state track championships, so reality doesn’t matter anymore.

In which case you need a definition of “leg” so you know whether a tail qualifies or not. Storey says the clause covers: “treaties of a political character; such as treaties of alliance for purposes of peace and war, and treaties of confederation, in which the parties are leagued for mutual government, political co-operation, and the exercise of political sovereignty, and treaties of cession of sovereignty, or conferring internal political jurisdiction, or external political dependence, or general commercial privileges”. This agreement would not seem to fit this definition, so it’s not a treaty, at least for this purpose.

And probably a good test case for the Logan Act.

It is probably a violation of the Compact Clause of Article I Section 10, the Logan Act — 18 U.S. Code § 953 and years of rather settled law. Quite simply put States are not allowed to conduct their own foreign policy. However the Federal Government is likely to not respond to this rather pyrrhic ploy by Governor Brown.

No state shall enter into any treaty, alliance, or confederation; grant letters of marque and reprisal; coin money; emit bills of credit; make anything but gold and silver coin a tender in payment of debts; pass any bill of attainder, ex post facto law, or law impairing the obligation of contracts, or grant any title of nobility.
…..

No state shall, without the consent of Congress, lay any duty of tonnage, keep troops, or ships of war in time of peace, enter into any agreement or compact with another state, or with a foreign power, or engage in war, unless actually invaded, or in such imminent danger as will not admit of delay.

There will likely be a late night screed on this thread from a poster given to vitriolic outbursts.

The kind of commenter who would be livid if a border state tried to enforce US immigration law when the US government won’t.

But now totes cool with states conducting their own foreign policies.

Where on earth did you get the idea that I’d be “livid” about a state voluntarily enforcing federal law? The courts currently say they can’t do so without federal permission, but I’m not convinced.

As for states having their own foreign policy, New York City has been doing so for the better part of a century, without anyone raising the slightest objection. So why should California not do the same?

However it is a fact that current supreme court precedent says the compacts clause applies only to “any combination tending to the increase of political power in the states, which may encroach upon or interfere with the just supremacy of the United States.”

It is also a fact that the Logan Act (even if it’s constitutional) explicitly limits itself to negotiations made “with intent to influence the measures or conduct of any foreign government or of any officer or agent thereof, in relation to any disputes or controversies with the United States, or to defeat the measures of the United States”. Unless you can name the controversy or dispute between China and the USA which this agreement affects, or the measure of the USA which it defeats, there can be no violation.

Remember when Sarah Palin pointed out that as governor of a border state she’d been in regular contact with foreign authorities?

I read about these deals and I never see any particulars. Is China going to give California foreign aid? Is California going to send China technology? The Chinese will tell these idiots anything they want to hear and do exactly as it pleases. It would be interesting to see the deals Brown signed.

This probably means that California will outsource work to China because they can’t expect welfare recipients or illegal aliens to actually work.

Which is more communist, China or California?

Being from Texas, I see stories like this as a great big nationwide ad campaign saying “HEY! Any of you chumps still own business in California? You better get to Texas quick before you’re completely ruined!!!”

So these stories don’t bother me in the least, in fact its kind of nice when your enemies do all of your work for you!

I saw somewhere this morning that Hawaii had entered in to a Paris Accord with someone recently as well.

I certainly hope both these two states are going to cough up the $500mil each required for membership to cover the fact that America aint contributing any more money to the climate slush fund.

Nice to see the Chinese Communists and California Communists working together.

This doesn’t seem to serve any function. (Aside from the obvious grandstanding, of course.) The Paris version gives China official approval to pollute; the California version isn’t likely to pretend to do any such thing. And it has nothing to do with redistributing the world’s wealth, since California’s is already used up.

It probably means that California will buy ‘climate indulgences‘ from China, who has an endless supply.

And it’s not as if California has any money problems . . . .

so arizona sb1070 which said follow fed law is bad.
caloifornia making (for all intents and purposes) their own treaty with a foreign nation good.

What a bunch of buffoonery… And virtue signaling. China is one of the world’s BIGGEST CO2 producers, the biggest polluters, and has no intention of stopping its coal production and use (using dirty coal, etc).

Did I miss anything?

Californians voted for him. So, suck it up.

The same applies to the Logan Act, even in the (very unlikely) event that it’s constitutional. No frustrating the measures of the United States, no violation.