What life in the Country of California would look like.

It’s as predictable as the sun rising in the east: A Democratic candidate loses the presidential election and progressives begin complaining about how the unfair Electoral College.

This Thanksgiving Week, I would like to discuss how Americans everywhere should be thankful our Founding Fathers established this system by using California as an example of what would happen if the presidency rested on popular vote totals.

Let me begin this exercise by highlighting the claim by promoters of #CalExit: California is so vast (economically, regionally, and in population) and so different culturally, that it deserves to be its own nation:

[T]here are some really good signs that the Golden State and the other 49 are literally two ships going in different directions.

Take California out of the picture, and Mr. Trump wins the popular vote, and this big “blue” mark is not on the map.

So, let’s assume this inane idea succeeds. Driven by the progressive idea that the popular vote must be deciding factor for national leadership, it will be the vast population centers that ultimately pick the “President of California”.

And while the rest of the 49 states celebrate a rapid return to governance that embraces free markets and reasoned policies, the Country of California would be controlled by Bay Area elites who have no desire to address the concerns of the remainder of the state.

Actually, Californians already live this life. Time and time again, the coastal areas have sent representatives to Sacramento and Washington, D.C. who are focused on their special interests, neglecting the needs of rural areas and smaller cities outside of the Big Blue Corridor between Los Angeles and San Francisco. A map of the 2008/2012 presidential voting results demonstrates this divide: 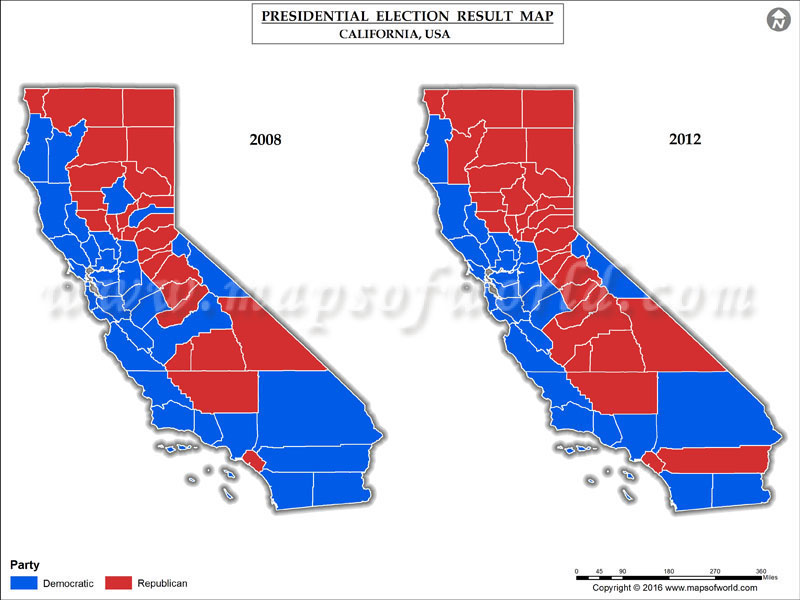 One example of how this system’s failure is that the Central Valley (the breadbasket of the nation) has had its water supply diverted so that eco-activists can preen about the baitfish they are saving in the San Francisco Bay and the Sacramento-San Joaquin Delta.  Small businesses that aren’t on the progressive preference list have been crushed as well, such as the gold mining operation once run by Yreka resident Michael Adams:

“They just took my livelihood away based on speculation and falsehoods,” Adams says. “California takes away our property, takes away our rights. That’s a form of tyranny.”

Lest we forget some of the most egregious laws passed by the Legislature and signed into law by Gov. Jerry Brown in recent years in California, here are a few:

However, the recent 2016 election may offer some solutions. Perhaps an independent-minded candidate can “Trump” the state by running against the Bay Area politicos? Maybe our citizen activists can place a counter-proposal on the ballot for a state-electoral-college system so that our rural areas have more say in state-wide elected offices?

Meanwhile, Anti-Trump secessionists have filed formal paperwork to launch their petition drive aimed at separating California from the union by first putting the issue before voters on the 2018 ballot.  Our California conservative groups are now discussing ways to counter this move, such as reminding voters of practicalities (e.g., national defense, disaster relief) that the Trump-haters are ignoring in this deluded drive.

Should we address the four state water agreement, and how it would become three states and a foreign Nation to be negotiated with later?

Keep in mind, California would be negotiating with a US that didn’t have California’s Liberals to appease.

Get used to bolted water.

On Thanksgiving, all rules regarding the correct spelling of words is hereby rescinded.

I left California for the Midwest (where I grew up) last winter, having flipped off Jerry Brown as I crossed the Nevada border. I had lived there 34 years and finally had it. Great weather, otherwise complete lunacy. Iowa is a much saner place and I am really enjoying having 4 seasons again. When I told my friends I was moving, half thought I was crazy, the other half told me they would move if it weren’t for jobs and/or family. I met up with some acquaintances from SoCal a few months later and told them about our lack of traffic (our rush hour is a rush minute). They were incredulous that such a place existed. Mainly they are clueless about another slower, more grounded way of life. Sad that they put up with such moronic leaders.

I moved to Missouri in 2014 and have not been happier in many years. Living in CA had become such a struggle with the high cost of living. In the midwest one can have a good life with a “normal” job.

If we are going to overhaul our federal election system and enshrine the popular vote, perhaps we should go further and adopt instant run-off elections. This would allow the 3rd party voters to vote on their 3rd party favorites and yet still have their say on the 2 major party candidates. After all, the electoral system acts to disenfranchise 3rd party voters as well. But of course, this is all pie-in-the-sky since it would require a constitutional amendment, which has all the chances of an ice-cube in hell.

Furthermore, I firmly believe that the majority of those complaining about the electoral college only care because it hurt their candidate. If the shoe was on the other foot, Hillary supporters would be perfectly happy with the electoral college and Trump supporters would be the ones calling for change. Don’t forget the golden rule of modern American politics – outcomes matter, principles don’t.

Just call me cynical. I live in California.

California is the only state that imports oil for local use. There is no pipeline capacity from the oil patch to California and the will not drill their own oil.

If there is a major confrontation in the straits of Hormus and oil supply is interrupted, California will be screwed and the rest of the country will be fine.

Another “exit strategy” on the drawing board is the State of Jefferson movement… CA’s north and eastern rural counties looking to join with some of Oregon’s southern counties to form a separate state… [www.soj51.net]

Once one gets about 100 miles (less in some spots) away from the coast things get different. Sacramento is an island of liberal lunacy interrupting that formula, however.

Another version of this has the eastern counties of California, Oregon, and Washington asking to be joined to Idaho. It would accomplish the goal of allowing the residents to live a state in which they would fit better ideologically and would avoid the hassle of the creation of a new state.

“Sacramento is an island of liberal lunacy interrupting that formula, however.”

They can move the capitol back to Benicia. The lunacy will follow.

Why are conservative groups trying to block California secession? We should be clearing the way for its success.

I was wondering that too, until I noticed that it was California conservatives opposing this. You would oppose it too, if you lived there. It beats having to sell up and leave.

The US still needs ports on the Pacific. Nowadays when it seems that all the necessities of civilization are mailed to us from Amazon, it’s easy to forget that container ships are still a part of the whole system. There’s a big expensive Navy base in CA too, and the only US launch site for polar-orbit satellites.

I’m all for the Western part of California leaving but for the most part the Eastern part doesn’t want to go and I want to keep it.

I’ve never heard of an attempt to do a state electoral college, but several states tried to have a senate in which all counties are represented equally, and this was overturned as a violation of the 14th amendment, which it clearly is.

The difference is obvious: the states are not creations or divisions of the USA; the USA is a federation of sovereign states that joined together on mutually acceptable terms that can only be changed by the process they agreed to. States are not federations of counties; on the contrary, counties are mere administrative divisions of states (which by the way is why the 14th amendment applies to them). The states made them, and can unmake them or remake them at will. Counties have no rights against their states. Therefore a state has no right to draw up unequal counties and then give them equal representation, merely as a way of giving certain of its citizens a greater say than the rest of its citizens.

As long as they pay the US for all the Federal property and National Parks in US dollars they can go.

Why should they? Those were paid for in the first place with their tax dollars. Did the USA pay the UK for Crown property that it took over?!

If you’re going to San Francisco be sure to wear some flowers in your hair.

Why give up any part of our Union? Let them pass all the initiatives and referendums they wish–ignore it. But when they really try to leave the Union by using California force (e.g. the state’s police powers) against the USA then charge them, convict them, and remove their right to vote.

win-win. California remains in the Union and progressives are removed from power. Not quite as good as sending them to Canada (like after the Revolutionary War) or entirely removing their citizenship (like after the Civil War) but still effective.